Feature photo: Hockey coach, Richard Lim, with his ‘pride & joy’, Australian Sheppard dog – named Robin, “…probably the most important thing for the boys on a monday, because she helps take away any stress from a tough week/weekend.” He proudly added, “She’s my dog I got a couple of summers ago. She’s 1.5 years old super smart. Keeps me busy when not at the rink! Definitely the smartest of the house!!”

Some would say a secret weapon. 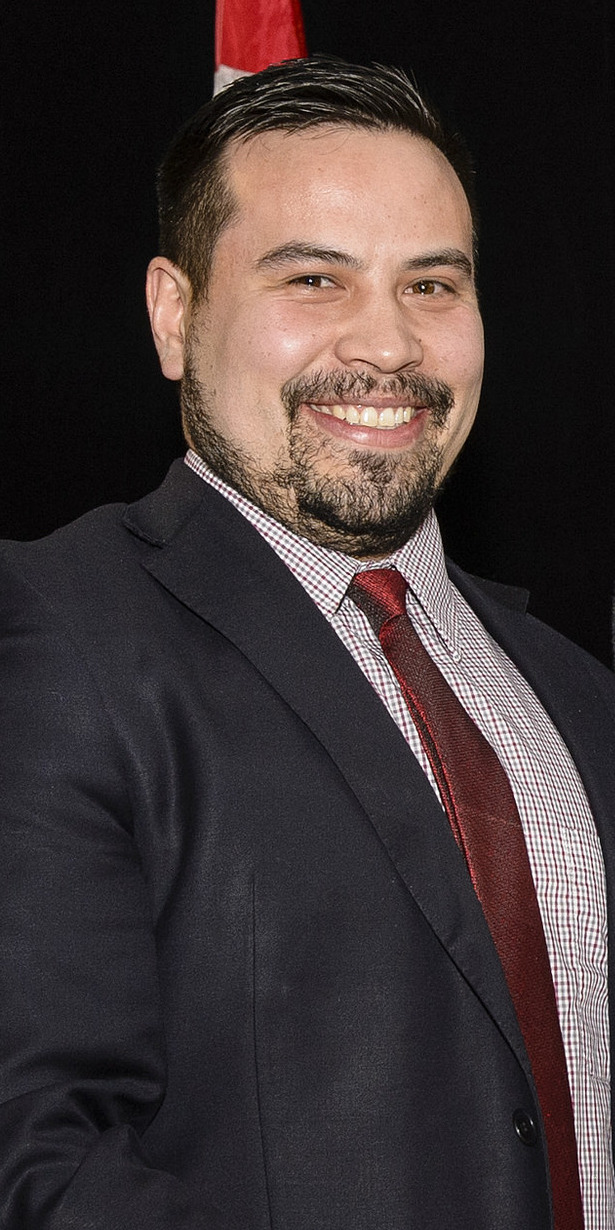 24974 Richard Lim Class of 2011, is a 32 year old Reserve Entry Training Program (RETP) Ex Cadet who eventually earned a Masters Degree in Applied Science – Structural Engineering from RMC.  He was one of the better players while playing for the Paladins for five seasons (technically 4.5). He actually started playing during the second term during the 2006-07 season.

Lim was a very durable player especially for one who played so physical over his four ‘full’ seasons; he only missed dressing for three games.  In total, he toiled in 120 league encounters which has to rank near the top all-time for a Paladin…or a Redmen.

On the score-sheets he tallied 25 times and recorded 54 assists for a total of 54 points. Oh yes, he also racked up 227 total penalty minutes which reflects on the hard-nosed type of game he played.

The Calgary native was the RMC team captain during his final season.

Prior to arriving at the college, he played in the Alberta Junior Hockey League – Jr.’A’ for the Calgary Canucks.  Racking up pretty impressive stats there too.

Richard completed his masters degree while serving as an assistant coach with the Paladins. After which, he headed out back to his home-town to engineer, working for two companies in the oil and gas and energy sectors.

While in Calgary, he coached minor hockey including Hockey Alberta – Program of Excellence.

His day job sent him back to the Kingston area.

When the RMC head coaching position opened up, he applied and the rest is history. This is now his third season at the helm and good things are starting to happen.

For long time hockey followers at the college, Richard, reminds many of a Wayne Kirk, and Andy Scott type bench boss. He combines great hockey smarts with a scholarly approach to game tactics that most of the players buy into and execute on a regular basis.

We caught up with the determined and focused hockey coach just prior to him taking off on an extended ‘scouting’ trip which will keep him very busy during the break in the OUA schedule.

17 games into the season, how would you describe the 2017-18 Paladins hockey team?

I think as a whole, the first semester has been a success. Were a group that has been preaching process, buying into the process, and focusing on getting better day to day.  We knew it would take a bit of time for us to win our fair share of games, with us adding 11 new players to the roster this year.  Now that our first years are out of FYOP and have found their rhythm at this level, we have been playing really well as we closed out the semester.  This group has been able to do some things that RMC as a program have never accomplished or only accomplished a couple of times in our rich history.

Where has it improved the most from last year? What is one area that still needs to be improved if the team wants to reach its potential?

I think our team game and defensive play has improved from last year. With thre addition of a lot of great first years, we are deeper and play a more rounded team game.  When we play our style for 60 minutes we are in every game and have a chance to win.  And win or loose we are playing a very fast and exciting game right now.

We are still having a tough time producing offensively, so that is always something that we try to improve with our practices, habits and mentality.

What are three reasons fans should come out to watch the team in the second term?

First and foremost – it is exciting hockey.  Anyone that has seen a game this year, always tells me how exciting and fast the game was

2nd – The atmosphere is great – the mess is serving beverages and snacks during games, and our attendance has been pretty good.  The crowd is into the games with cheers and chants.  It’s a fun environment to be in

3rd – The player work hard and  feed off the tremendous support we get from the college and their peers.

We heard that you are off on an extensive ‘scouting recruiting’ trip out West. Where are you heading – how many games do you expect to watch?

I’m off to Winnipeg to watch the Manitoba Junior Hockey Leauge  showcase, where I’ll be able to take in 12 games in 3 days.  Then, I’m off to Alberta where I’ll take in another 7 games in 7 days in the AJHL and Western Hockey League.  It will be a lot of hockey in a short time, but I’m looking forward to it.

You brought in 11 ‘rookies’ this year how many would you expect / hope to bring in for next season?

We were fortunate to bring in 11 extraordinary individuals this year, it helps that they are great hockey players!  When recruiting, my number one priority is to bring in Student Athletes that will contribute to the great culture that we have built in our dressing room.  It does not matter how great they are on the ice, if they don’t fit in, in our room, then they aren’t RMC hockey material.  After that, we have our eyes on a few ‘D’ men and a goalie, while I’m hoping to find a couple forwards that will be able to help our offensive production.

After playing five years at RMC, you essentially went straight into coaching under Adam Shell. When did you know you wanted to make a career out of coaching hockey?

I was actually fortunate to coach Bantam AAA out west before I came to RMC.  I really enjoyed that experience and knew that I would get back into it one day.  After having the opportunity to learn under Adam, coaching became a passion and I soon realized that I wanted to try and make a career of it.  Fortunately, everything worked out and I’m back with an RMC program that I truly believe in.

Which do you like better, playing or coaching? Why?

Early on I did find myself; once and a while, standing on the bench in games, wishing I could play and make an immediate impact/difference in the game.  But other than that, I love the coaching side.  I love not waking up in the morning feeling like I was hit by a Mack Truck.  In addition, the responsibility of helping 27 young men, not only improve on ice but to excel through the 4 pillars at RMC is a great honour.

What do you remember as the highest and lowest points of your RMC playing career?

There aren’t too many low points that I still hold on to, probably the biggest disappointment is how I finished my playing career. I finished my last few games, dressing but sitting on the bench as I had a knee injury.

As far as highest points, I will always remember my first Carr-Harris, a shootout win at Constantine.  I was fortunate, to also win Carr-Harris MVP the next year.

What’s the biggest difference you notice in the RMC player of today compared to your collegiate teammates? What commonalities do both possess?

I think one of the biggest differences in the players today is the on ice skill level; guys now are so skilled.  Also, the players now have grown up eat, sleep and breathing hockey, so they all put in the work away from the rink to be ready, when I played dynamic warm ups were still a new thing.

I think both groups are / were full of determined athletes.  They are super task focused and full of great leaders.  The ROTP program hasn’t changed much, so its no surprise that my teammates and the athletes we have now still have similar characteristics.  Especially now, we have a room of guys that refuse to quit and want to be the hardest workers.

Tossing and turning: what keeps you awake at night?  The night before a game?  The night after the game?

Losing.  I hate losing, I’m always replaying in my head, things I could have done in-game or the week of practice to put us in a better spot.  That and recruiting are my 2 biggest sleep deprivers.  It’s tough with our recruiting season being while we are in season.  So I’m always playing in my mind players and coaches that I have to contact and different ways to sell our fantastic program.

15161 Eric Murray: Success is all about teamwork, says Mississauga’s businessperson of the year