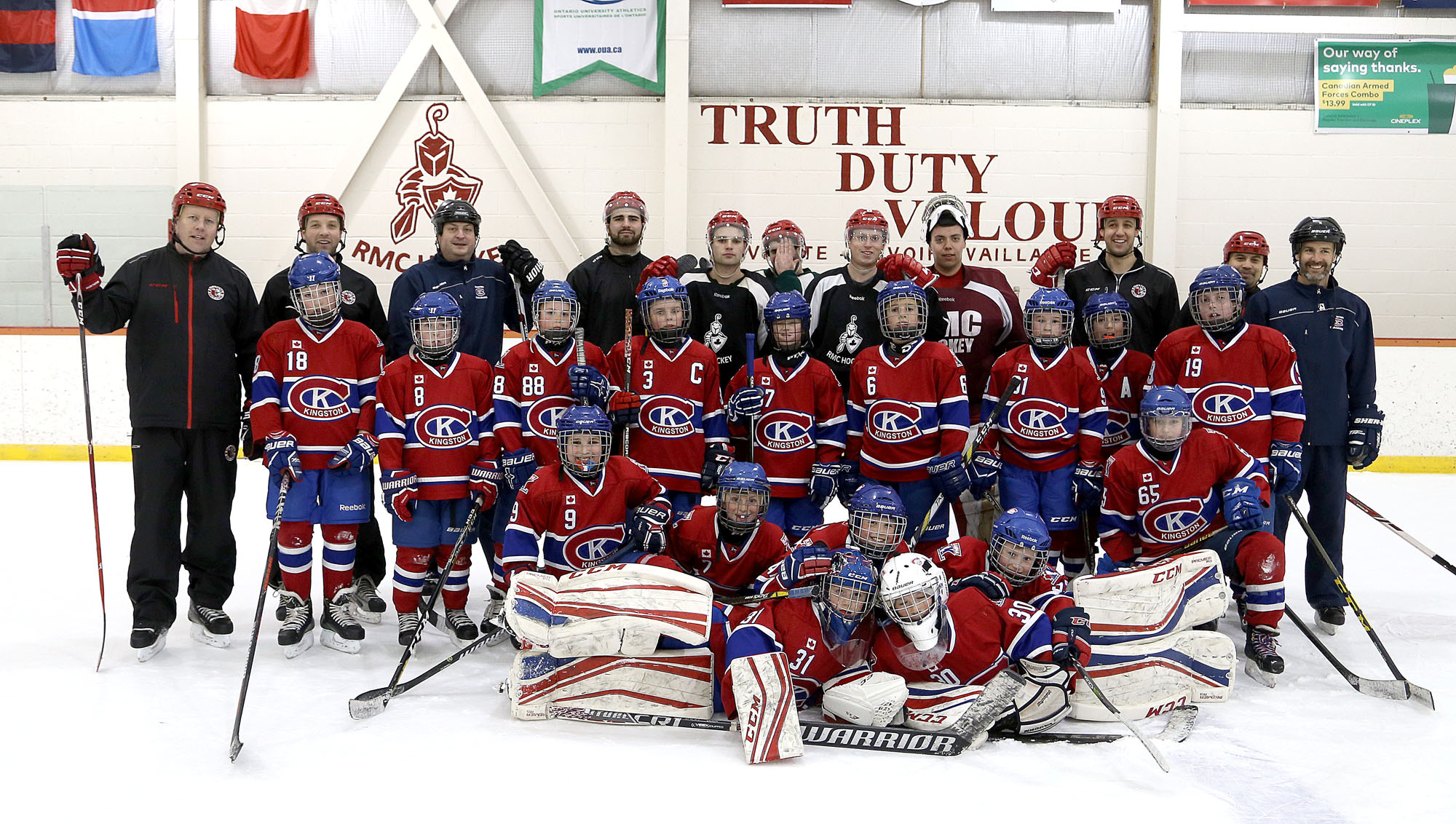 Two hockey teams, one comprised of young men playing university hockey and another, a group of 10 and 11 year-old boys playing minor hockey, that have much in common, got together on the ice at Constantine Arena recently.

The Royal Military College Paladins and Atom A Kingston Canadians held a skill session together recently under the guidance of Paladins coach Richard Lim.

Both teams are wrapping up their seasons and are already preparing for the next hockey season but the bonds between the two teams doesn’t end there.

Four of players are children of current or retired Canadian Armed Forces members, one young player, Riley Cossaboom, is the son of Maj. Matt Cossaboom, a former Paladin, Doug Cameron, a video coach for RMC is also a coach of the Canadians and another current Canadians coach, Fraser MacAlpine, is a former Paladins video coach and manager of social media for RMC’s athletic department.

As well many of the Canadians players have cheered on the Paladins at Constantine Arena and the entire team attended both of RMC’s games this season at the Rogers K-Rock Centre, the first against West Point Military Academy and their exciting 6-5 overtime loss to the Queen’s Gaels in the annual Carr-Harris Cup hockey game.

The Paladins are coming off one of their more successful seasons in the Ontario University Association (OUA) league just narrowly missing the playoffs by a couple of points.

In the 50 minute session Lim, who is completing his third year at the helm of the RMC hockey team, put the young players through a series of high tempo skill development drills using about half dozen Paladins players to demonstrate the drills and provide positive feedback.

David Savery, a third-year alternate captain this year, said the session reminded him of his days playing minor hockey.

“We used to practice with junior teams when I was little, it meant a lot to us and it gave us something to strive for,” said the officer-cadet.

Savery, a defencemen tallied 22 points in 26 games this year.

“It’s nice to give back to the kids who come and watch us all the time too.”

“These kids are hard to score on.”

Savery was asked what he thought the young players will get out of the session.

“I know when I was little any chance you got to skate with someone on a higher level it was a little bit motivational,” he said. “Maybe they’ll go home and practice their skills and maybe see them wearing our jersey one day, who knows.”

Third year Paladin Owen Gill, the son of former Toronto Maple Leafs defenceman Todd Gill, said the experience with the young players for him was ‘awesome’.

“Anytime you have a chance to give back to the community you might as well do it,” Gill said. “It’s fun for us and fun for them obviously so we have a good time. We try to show them a thing or two but it’s pretty much just having fun.”

Gill, who plays forward and is a history major officer-cadet, was impressed with the 10 and 11 year-old players hockey skills.

“Their pivoting is really, really good. I’m really surprised by that.”

Lim enjoyed the session as well.

“It’s always fun to see the smiles and to change up the routine a little bit for our guys and it’s always nice to see our guys pitch in and help out and put out a good name in the community and it’s fun to have the little guys out.”

Did he see any future Paladins on the ice?

“Hopefully, that would be nice if they kept progressing and it would sort of spark the interest it would be great to see.”

Nicolas Eastwood, who has both his parents serving in the Canadian Armed Forces, including his mother Maj. Christina Eastwood, an assistant professor at RMC, said the practice was great.

“It was lots of fun and we got to meet RMC guys.”  Eastwood said some of the Paladins gave him practice tips.

The session was arranged by Maj. Eastwood and Lim.

Riley Cossaboom, said the practice was a “fun and a good experience.”

He thought coach Lim ran a tight and disciplined practice.

“He’s pretty nice but he’s not a patient guy though so you should work hard and listen.” 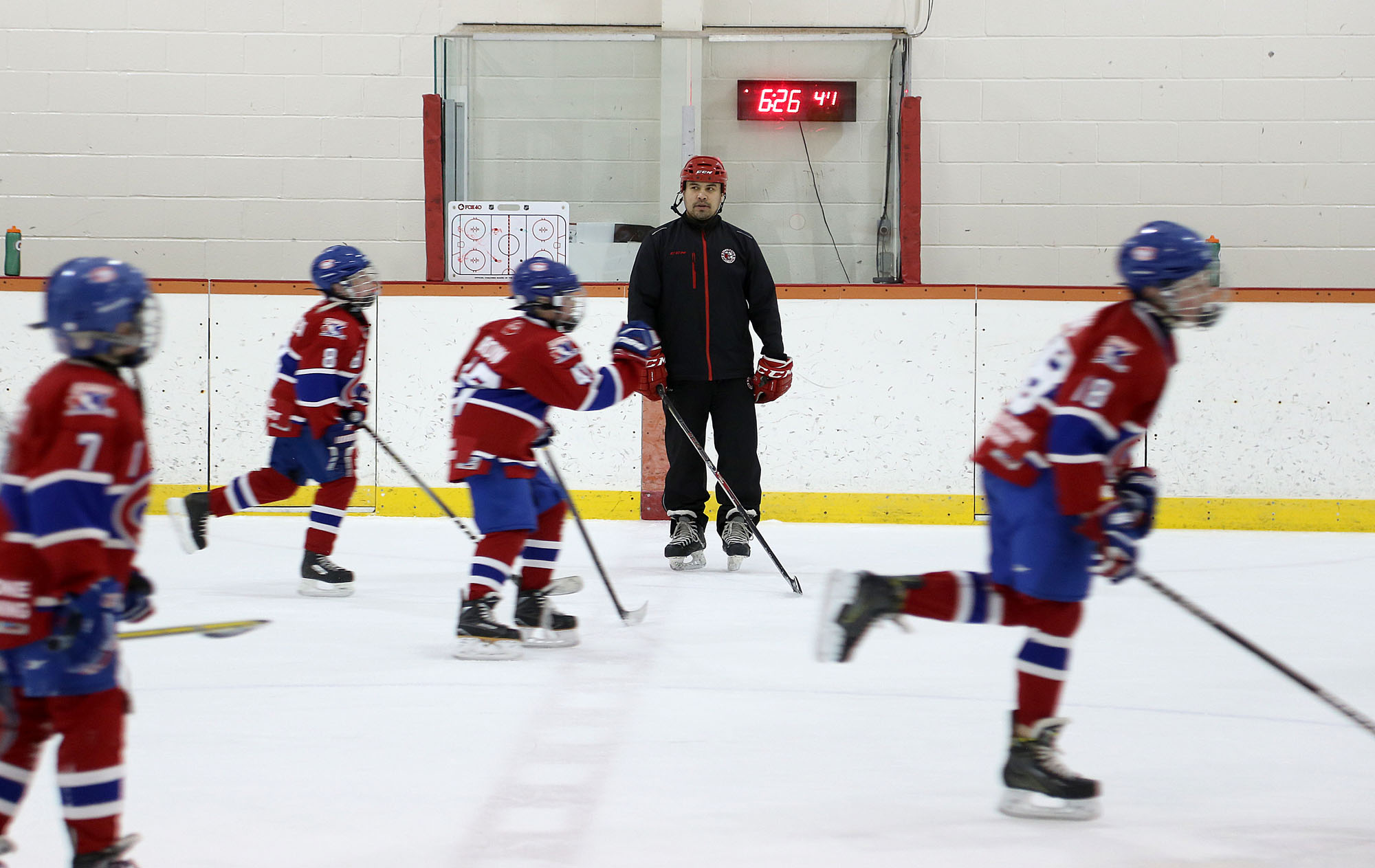 Colin Bond: A positive change, in the air, over the peninsula

The Best Little Army in the World