It was the middle late 1950s and the ongoing nuclear stalemate of the Cold War was in full swing. The United States was in the process of dramatically upgrading its air defenses against possible Soviet Air Attack. Intelligence information on Soviet strategic air attack capabilities justified this enhanced investment in a defense system to thwart a Soviet attack. The system that developed used the improving missile and computer technologies that had been generated in the accelerated post World War II technology and materiel development effort. It was fielded as the Nike Ajax Missile, a program that would endure in this and improved form through the mid 1970s. 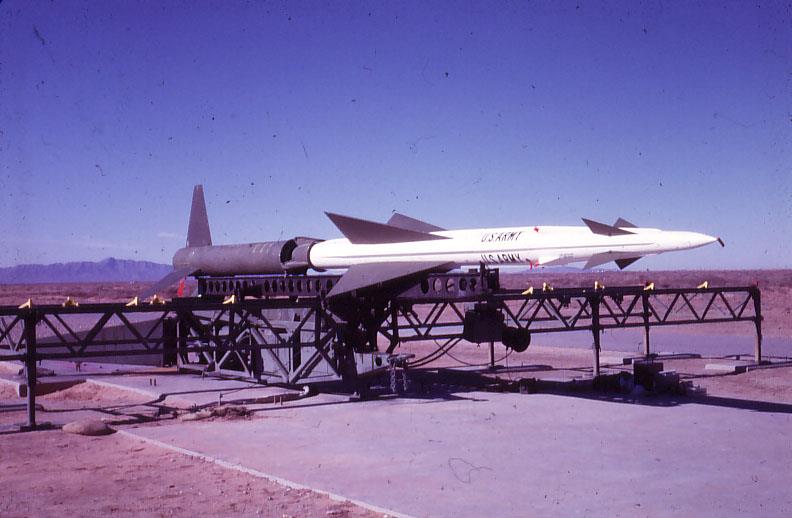 It was a missile system that employed an analogue computer fire control technology.  The tactical ground configuration was to position batteries of six missile launchers in the potential target areas such that the battery locations would optimize deployed missile target engagement zones in the event of attack.

Each battery involved a site installation of a target acquisition and fire direction center typically on a prominent elevated piece of terrain, a battery headquarters administrative and support location, a firing battery location and a weapons holding site.  The firing battery launchers and weapons sites were hardened against potential attack. 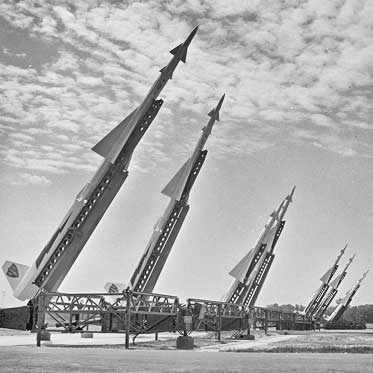 Three or more batteries were under the command of a battalion located within the area of the grouping of batteries. Site selection took into account not only tactical performance considerations but the existing civilian road nets, airport and other major community and industry operations that might impact the combat operations of the batteries to include security. Local security was a battery and battalion responsibility and dismounted defense and weapons training was conducted. Weapons range facilities were developed within each battalion’s area to support the necessary small arms weapons training. 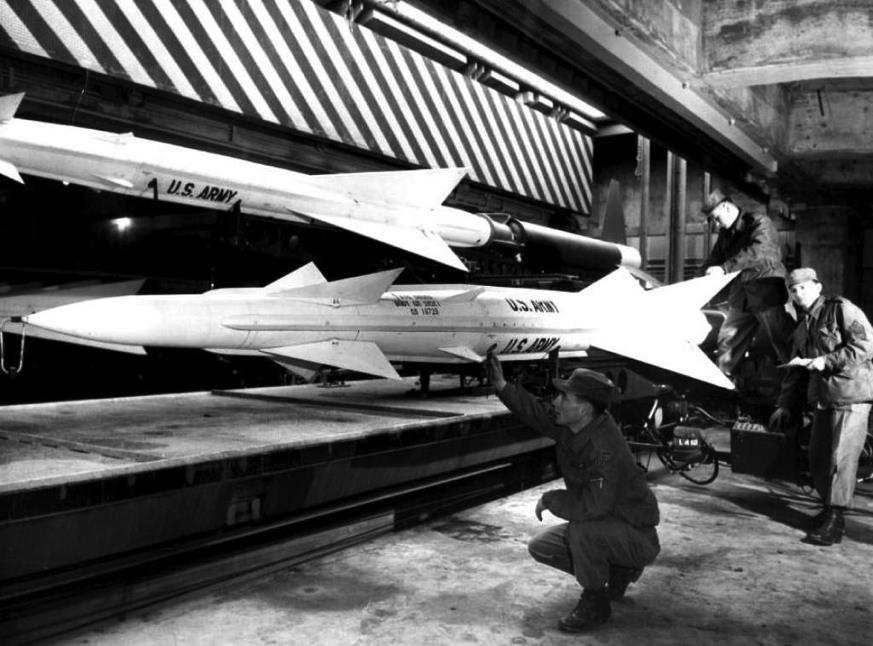 The batteries were fairly large establishments of 150 or more personnel.  Daily operations typically had battery tactical vehicles moving fairly frequently on local community roads between the different installation sites within each battery.

The battalions were located around the major ports along the coast and areas of major strategic value inland.  The latter comprised government centers like the District of Columbia or large strategic industrial concentrations.  In the 2nd Battalion, 55th Air Defense Artillery’s situation, it was the huge aviation industry concentration that occupied the Hartford, Connecticut Area.  Some of the more prominent of these industrial operations were Pratt & Whitney Aircraft, Hamilton Standard, Internal Combustion and further south in Connecticut, Sikorsky Aircraft and Electric Boat.  As well there were major weapons producers like Colt Firearms.

In the case of the coastal sites, most had experience and history back to the Revolution and in some cases the Colonial Era of defensive garrisons.  Active Coast Artillery units had been fairly significant parts of the experience of these communities through World War II and during the war hosting greatly expanded Army garrisons supporting troop movement and terminal activities, Army Air Force operations and major combat unit embarkations and debarkations. There was a level of familiarity in these communities with an active Army garrison and presence.

However, for the inland sites this was less the case.  Though World War II military forces expansion had touched almost every American locality and certainly some Midwestern and western sites had experienced military garrisons in proximity at earlier times, some municipalities in the northern tier had not experienced a troop garrison for perhaps 150 years or longer.  Some communities, outside their National Guard armories and units, had not experienced a military presence and some communities did not even have the National Guard exposure.  The increase in military activity in all communities, but especially those with no tradition of an active garrison or garrisons in recent times required a well tailored approach at community relations by the commanders.

The 2nd Battalion, 55th Air Defense Artillery would be locating its sites primarily in Manchester and Glastonbury, Connecticut emerging bedroom towns of Hartford.   Manchester had a farming then more recently manufacturing history while Glastonbury remained something of a farming town.  Manchester was a town of some 2O-25 thousand residents.  The only military activity of a standing garrison type experienced in recent times was at its red brick armory which supported elements of the 2nd Battalion, 169th Infantry, Connecticut Army National Guard.

As the 2nd Battalion, 55th Air Defense Artillery’s installations were being built one of the main routes being traveled by the battalion in Manchester was a stretch of Keeney and Hackmatack Streets between Headquarters, support and fire direction sites and the firing battery, weapons holding and the garrison family housing area sites.

By a coincidence, an Army infantry major had purchased a new build ranch type house on Hackmatack Street before deploying to Viet Nam in Summer 1956.  On his return from the year plus tour he was again deployed for several months to the U. S. Army Infantry School to attend the Infantry Officer Advanced Course then assume duties in the Boston, Massachusetts Area with 1st Army.

His family would experience the regular traffic of the M35 2 ½ ton trucks and other tactical vehicles between the sites.  At one point for over a year when the major moved his family into Navy quarters at Hingham Naval Ammunition Depot, the major rented his home to the lieutenant colonel commanding the 2nd Battalion, 55th Air Defense Artillery.

The 2nd Battalion would garrison the Manchester Area from 1958 to 1964.  During that time, the battalion’s relationship with the community would be a very good one.  Unit leaders remained very conscious of their footprint in the community and maintained outstanding relations.  Given the weaponry alone, this was a very important achievement.

Part of this outreach program involved a battalion open house at the headquarters.  The entire community was invited and the battalion had arranged activities and tours of its installations that were authorized for viewing by the public.  The headquarters site sat on a high point, a little peak, in the hilly area on that side of the town.  It was a pretty if not scenic location just above the main road that traveled further into the hills toward the University of Connecticut a 25 minute drive away

Approaching the headquarters area of the Nike missile site in Manchester Connecticut where much of the 2nd Battalion, 55th Air Defense Artillery’s open house was conducted—photo taken in 2016.

The open house was a very well done activity. There were all sorts of entertainments for children provided by the Regular Army soldiers of the unit and perhaps the most popular activity of all, even more than the tours of the fire direction center was the mess hall’s masterwork. Fantastic chocolate chip cookies and ice cream for the kids and some of the best southern fried chicken and French fries anyone could remember—the battery’s mess sergeant went all out.

The opposite building in the headquarters area—the indoor small arms range occupies the left portion of the building and is still in operation today.

Officers and soldiers were also noteworthy as community volunteers and active for example at one of the towns Catholic churches and the churches of the other denominations.  They frequented local businesses.  They were a positive community force.

Thinking to my on and off two years of observation of the battalion’s community oriented operations and my experiences in other community relationship situations at other Army posts, in Korea and in Germany, the leaders of the 2nd Battalion were perhaps some of the most effective leaders in this important function.  True, the social environment wasn’t the difficult one that emerged in the later 1960s but this unit’s leaders seemed to have been very adept at the community relations function.

To underscore the above comment, when visiting Connecticut in the Summer of 2016, I took a side trip to the battalion headquarters site.  The Nike Ajax and following Nike Hercules missile systems have been out of the Army inventory since the mid 1970s. Most of the installations started deactivating in the late 1960s and by the mid 1970s hardly any remained active.

The Manchester installation followed this course.  Many installations were demolished and built over. Yet, when I visited the fairly large complex in Manchester, it was intact, well preserved and maintained which was something of a surprise.  It was now a Community Recreation Center—the Town of Manchester Nike Site Recreation Area.

There are clearly practical reasons for this situation but from talking to several people at the site, it does appear those well maintained community relations of the 2nd Battalion’s officers and soldiers made a very good impression in the community during the site’s period of active operations, so much so that the site generated good memories in the community.  These sentiments apparently played a role in the community’s determination to retain the site in its original configuration for historic reasons and repurpose it in a way that would benefit the community.  The continued operation of the indoor weapons range is one example.

Again in this case the officers and soldiers of the 2nd Battalion, 55th Air Defense Artillery demonstrated a form of leadership that had highly beneficial effects for the mission and the long term regard of the Army by a civilian community.  This is perhaps effective and involved leadership at its best.

Note: the Nike Missile air defense systems, after initial deployment by the Regular Army in the middle 1950s to the early 1960s, transitioned to the Army National Guard in the middle 1960s through the remaining operational and service life of the systems in the middle 1970s.