“The bar here is high”

The day after the March through the Arch the RMC Commandant, 18777 BGen Sebastien Bouchard (RMC 1993); the Principal, 14458 Dr. Harry Kowal (RMC 1984); and the College Chief Warrant Officer, CWO Garth Hoegi addressed the Class of 2022 in Curie Hall. 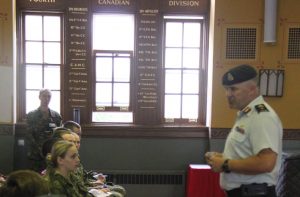 BGen Bouchard spoke first and as he made clear, “I’ve been here a year now and I know what I expect from you.” He offered his congratulations on making it through the recruiting centres and completing Basic Military Officer Qualification Phase 1 but reminded the Cadets that they haven’t picked the easiest way to become Officers in the CF. “That’s not here,” he said. “The bar here is high, and some of you will fail at first,” he went on. “It’s hard here but it’s even harder out in the CF. That being said, we are not here to inject stress. You will be stressed enough and you will be tired enough in this environment.”

After reminding the First Years how high the bar is set, BGen Bouchard underscored that they are not alone here at the College.  “We are all here to help you,” he emphasized. “Your FYOP Staff have all been specifically picked for their role. They have my full support.”

As an Ex-Cadet himself, BGen Bouchard had advice for the First Years as well. He highlighted the importance of physical fitness and academics. “Get in shape and don’t take shortcuts. And if you’re one of those who left high school with a 90% average, still make sure you start working on your studies from Day 1. If you don’t, it will be midterms before you know and you’ll be too far behind to catch up. We’re not going to lower our standards for you.” As he concluded, “Do what we tell you to do and you will succeed here. And you may not believe it now but FYOP will be one of your best times here at the College.” 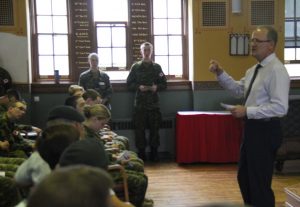 Dr. Harry Kowal, RMC Principal, echoed many of the Commandant’s sentiments. “My advice,” he said, “is to embrace the culture here. Embrace the Four Pillars and push yourself. And if you stumble while doing so that’s OK. When I was a Cadet here I failed history in Third Year and now I’m back as the Principal.”

As Dr. Kowal explained, the Academic Wing staff are here to help the students succeed. “Let us help you,” he stressed. “Our class sizes are small, so you’ll get to know your professors. They are committed to your success and available to help as needed.” And while the professors are there to help, the Cadets do have a responsibility in that regard as well. “Help yourselves,” he said. “Be responsible for your own actions. You’re getting paid to go to school. Your place of duty is in the classroom and we will hold you accountable to that.”

“At the same time,” Dr. Kowal concluded, “learn to find the balance in life here at the College. There’s Four Pillars, yes, but I’ve often joked that there’s a Fifth and that’s your social life. Having fun at the College is OK, it’s allowed, but don’t let it affect your performance here.” 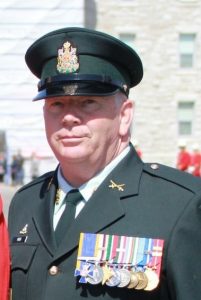 CWO Hoegi picked up on the theme of embracing the culture in his remarks. “I’ve noticed in my two years here,” he explained, “that those Cadets who don’t embrace it have problems here at the College.” Furthermore, as he reiterated, “It is not weakness to ask for help. Do not hesitate to reach out if you need to. Your senior Cadets are here to mentor you and support you and so is the Training Wing staff. We also have a very robust medical support system in place, both for your physical and your mental health.”

CWO Hoegi concluded by emphasizing that the Cadets have both the opportunity and the responsibility to help change more negative aspects of the College culture. He reiterated the purpose of Op Honour, which is the CF project to eradicate harmful and inappropriate sexual behaviour throughout the Forces. “From my perspective,” he explained, “when you track the major incidents involving Cadets here at the College, you find that alcohol played a role in most of them. So when you go downtown for a drink, once you have that freedom and you’re of age, know your limits. Look after yourself and look after your buddies. See that everyone gets home safe. Do that and we’ll solve a lot of these problems before they even start. It’s about respect.”

As BGen Bouchard summed up the briefing, that respect is at the core of what he expects from the Cadets selected as First Year Orientation Period Staff. “You know the ethical behaviour expected of you. Hold to that and you’ll be good to go.”

Close to 300 New Faces 'March Through the Arch'