Article and Photos by Steph Crosier, The Kingston Whig-Standard 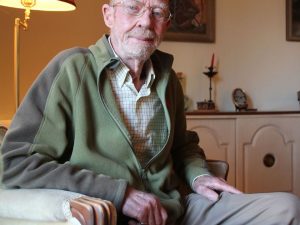 Arriving on the Korean peninsula in the mid-1950s, two Royal Military College graduates saw a country scarred by a war that had ravaged it. While they were there to serve their country, both, at the time, were slightly bothered they’d missed the “action.”

“At 23, you’re not scared,” Robert Adams laughed, sitting in his Inner Harbour condo. “Apprehensive, maybe. I had trained for four years for this. It was not like I was going to something brand new. But at 23, you don’t know enough to be scared.”

Adams is originally from Milton, Ont., where he was kicked out of high school in his final year after “differences of opinion” with his principal. Managing to find another school to take his exams, Adams was accepted to RMC to study electrical engineering, majoring in communications.

Upon graduating from RMC on June 2, 1953, he became a signals officer, married his love Margaret immediately and went down to Bermuda for their honeymoon. They had just 30 days of leave before Adams would start his journey to Korea.

What a journey it was. First he and three friends drove across the country, flew from Alaska to Japan, took a train to a southern port and then hopped on a ship to Busan, South Korea.

“When I got there, it was the exact day that the armistice was declared,” the 87-year-old said with a chuckle. “There were 12 of us joining various troops that day. In one way it was a disappointment, we were expecting to have another year of war, on the other hand, it was a relief.

“It was very mixed feelings of whether we were escaping a war or missing the war… we had a desire to test ourselves and that didn’t happen in quite the way we imagined it would.”

Adams’ first job upon his arrival was to help clean up the demilitarized zone. Assigned to the third battalion of the Royal Canadian Regiment, the infantry troops were blowing up their bunkers, just a few hundred metres away from the enemy.

“We could see where [the Chinese] were, and they were in some places that were unexpected,” Adams said. “Nobody really knew they had been there. They had tunnelled through the hills and camouflaged the entrances on the other side. But I guess they got a few surprises when they looked across the valley to us too.”

While the countryside was devastated, it was the local children Adams met that still stick in his mind.

“When we first got over there, we’d see these kids on the side of the road begging, and you felt a tremendous compassion,” Adams recalled. “These kids, most were malnourished, not very well clothed, the winters are cold in Korea, but by the time I left, I was so inured to this that I could ignore it.

“It bothered me for a long time.  The fact that you could get so hardened that you just sort of ignore this kind of stuff.” 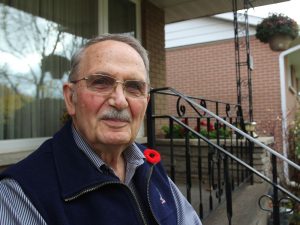 Ron Mann graduated from RMC a year after Adams and arrived in Korea a few weeks later. While they were there at the same time, they never came across one another directly.

Mann was born in Winnipeg but raised in the bush of Northern Ontario where his father was a miner in fly-in communities. In his early teens the Mann family moved to Thunder Bay where he had maps of Second World War campaigns on his bedroom walls. He admired the army life so much that in his second last year of secondary school, Mann joined the local artillery militia, which would now be known as a Canada Reserve Force unit.

“I’d been raised during the War, pretty well, raised on the war,” the 87-year-old said.

He discovered RMC when some cadets came home on leave. Mann found an application and suddenly he was the first of his family to travel east of Wawa, Ont. in three generations. He studied chemical engineering at RMC from 1950-1954, because his high school chemistry teacher, Pat Scully, said he’d be good at it.

Once he graduated, Mann was ready to head over to Korea upon graduation — even delaying his marriage to now wife Helen till his return. He and his peers, all in their early twenties, were excited to serve their country, having missed the opportunity to do so during the Second World War.

When he finally arrived, he served as a junior officer of a gun troop within the Third Royal Canadian Horse Artillery.

A significant event that has stuck in Mann’s mind was when he visited Gloucester Valley. The valley hosted the Battle of the Imjin River in April 1951. The British Army suffered more than 1,000 casualties, 620 of which were from the Gloucestershire Regiment (the Glousters),and the Chinese lost upward of 10,000.

“The Glosters had gotten chewed up, badly,” Mann said. “You think: I’m glad it wasn’t me.”

Mann also enjoyed the men in his troop, two-thirds of which were from the Newfoundland and Cape Breton.

“Ex-fishermen or ex-coal miners,” Mann said. “Tremendous soldiers because they didn’t care about the weather, or hard work, or lack of sleep. They’d work for days in rotten weather.”

For Adams, Remembrance Day is meaningful for two reasons: he honours his father who served in the First World War, and to remember his own service and the sacrifices of his friends on and off the battle field.  It is also a chance for him to recognize the work Canadians did in Korea, something he said didn’t happen when they returned home.

“When the Second World War ended the troops all came home to a really big welcome,” Adams said. “When the Korean troops came home, there was nothing. Nothing… For those who fought over there, the letdown was tremendous.”

For Mann, the day is about remembering the price that is paid during a war.

“You’re honouring those who served and didn’t come back, but you’re keeping alive the thought that war is not a good thing,” Mann said. “War is to be avoided, there’s a cost — a serious cost.”

“For a short amount of time, the world fell silent”

The red poppy is a sign of remembrance for all of those before us who have stood up in a time of danger and put our future before themselves. It’s a symbol to remind us of the cost of freedom and what sacrifices have been made to secure it. It also signifies a time of the year where we reflect not only on the fallen, but the ones still with us today.

This past November 11th, 100’s Cadets from the Royal MIlitary College of Canada took part in numerous ceremonies at CFB Kingston, the RMC Campus, various locations in the town of Kingston, and even the national ceremony in Ottawa. They were accompanied by veterans, members of government, foreign diplomats, and large crowds of people, all bearing the symbol of remembrance.

Overall, the entire day was extremely emotional. I had the privilege of taking part in the ceremony at the Memorial Arch on the RMC Campus. After forming up and marching into our positions, we observed two minutes of silence in honour of our veterans. After a few seconds, a lone bagpiper played a tune that sent goosebumps up and down my body. And, for a short amount of time, the world fell silent.

This year’s ceremonies are being recognized as very important ones: this year’s Remembrance Day marks 100 years since the end of the First World War. Since then, over 100,000 Canadian soldiers, sailors, and airmen/women have laid down their lives and paid the ultimate sacrifice to protect the freedoms of billions worldwide.

And as we move forward in history and observe the consequences of our past battles, we’re coming to terms with the true reality of war: no one ever leaves war unaffected; everyone’s a casualty in some way.

For more photos from the various ceremonies please see here.

Editor’s Note: The contingents of Cadets sent to the various local ceremonies made the first official use of the newly donated and issued “pith” helmets. 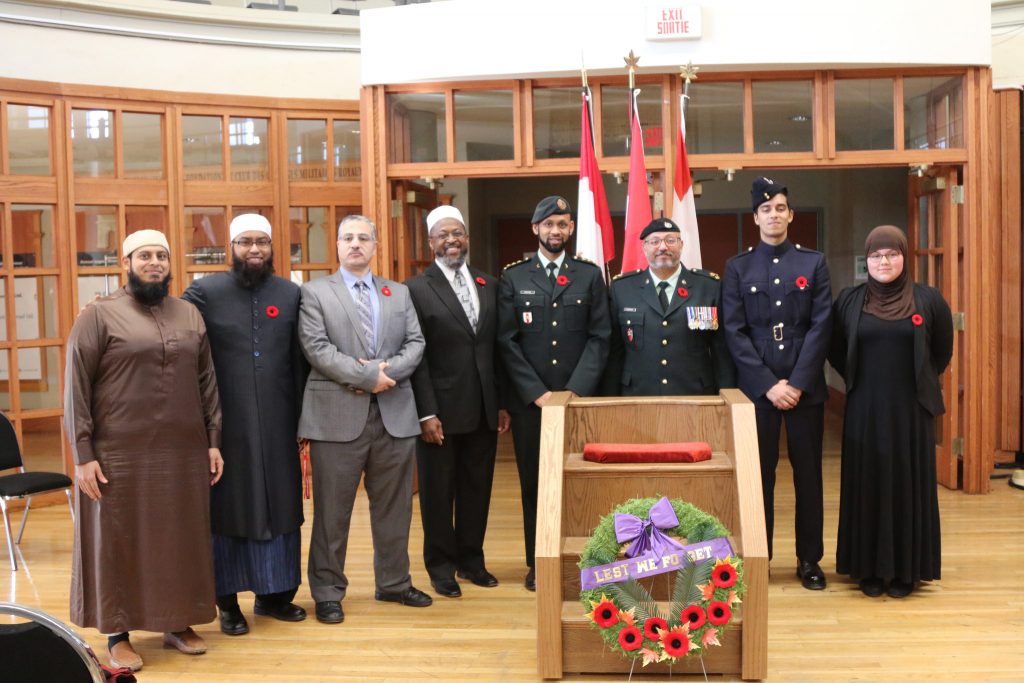 This year, the second Muslims Remember commemoration was held at RMC which was born out of the experience of many Muslim Canadians and indeed visible minorities that the historical narrative which is often conveyed during this important day places them in an ambivalent posture of participating in something which they know they should, but not feeling entirely “part of it”. You see, if you didn’t come from a Canadian military background, didn’t know anyone in the military, let alone see someone in a uniform, and if all the images of Canadians at war didn’t seem to represent you,  it could be very easy to ask the question where do I find my place in this Canadian historical narrative?

One hundred years after the Armistice was signed to cease the hostilities of the First World War, it is helpful to recall the cheer diversity of the men and women that formed a large segment of the allied effort. In the context of the highly heterogeneous global Muslim community, it is estimated that nearly 2.5 million Muslims contributed to the allied war effort as either soldier or laborer, drawn predominantly from regions such as China, Russia, India and North Africa. Last year we even highlighted the more recent research that there were approximately 22 Muslims in the Canadian Expeditionary Force, one of whom died in combat at the battle of Hill 70, Private Hassan Amat.

While the conversation of Muslims in the World Wars tend to evoke a frank conversation about the bitter reality of colonialism and modern geopolitics, all of which are essential components in understanding the interconnectedness of the world and larger political motivations, these discussions tend to eliminate ‘people’ from the discussion, which is precisely what I desired to bring back into the minds of the community.

Remembrance Day and other designated periods where we highlight the diversity of Canada (Black History Month, Asian History Month etc.) are particularly important to me in creating an inclusive picture of who we are as Canadians and to acknowledge that nobody has an exclusive ownership over this precious narrative of remembrance which must continue to reflect the diversity of our military family, both past and present.