In our lives, leaders appear in many guises if we are paying attention and learning from the people around us.  Some clearly are people in formal leadership roles in organizations we are members of who not only occupy the position of leadership but in fact provide leadership.  Some do not.  Others are people in our communities who, as well, occupy the formal positions of leadership and prove themselves true leaders in these roles.  Others are friends, peers and family members that in their station “act as leaders” and make a difference, often by their conduct and example.  One of the latter is captured in the following vignette.

As many did in the “Greatest Generation” George Andrew Rozman was called from civil life at a young age to serve in the Army.  He answered the call.  He also fought through some of the great battles of World War II.  As a combat field artilleryman he experienced terror and the truth of battle.  With the demons of that experience a personal lifelong legacy he nevertheless made a life in peaceful pursuit as a tradesman and built a family.  But more importantly, he served as a role model and exemplar of the citizen soldier to his children and his younger extended family members.  He was a leader in his example to this following generation.

The Private First Class was returning home to Connecticut after almost three years of active service in the expanded World War II Army.  Not a tall man at 5’ 3” he had been inducted into the Army in January 1943 at 19 years of age, almost seven months before his 20th birthday. He answered the call to service.

He had then trained in the U. S. for the following four months until deploying and arriving in the European Theater of operations on 13 June 1943.  He would be assigned to a legendary Regular Army formation, the 1st Infantry Division and its Division Artillery as a replacement M101 105mm Howitzer gun crewman, a cannoneer, in the 32nd Field Artillery Battalion.  He would serve the gun during training in England, across Omaha Beach at Normandy and throughout the break out to Northern France, on to the Rhineland, then the Ardennes and in to Central Europe ultimately finishing active combat operations in Czechoslovakia when Germany capitulated and hostilities ceased in May 1945. 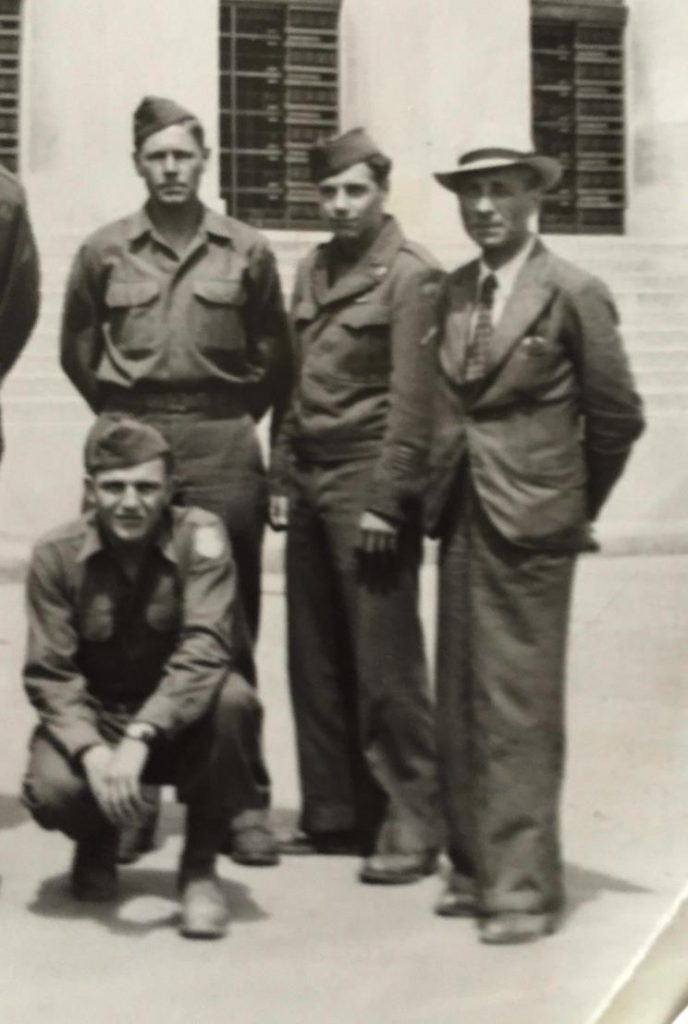 As the units in place began the process that would consolidate allied political and command determined post hostilities U. S. responsibilities relative to the occupation of Germany, systems for citizen soldier return to the United States and demobilization were developed.  As a “high point” man in the point based system that came into use to determine soldier priority for return to the United States and ultimate separation from service, the Private First Class was reassigned from the 32nd Field Artillery Battalion, 1st Infantry Division Artillery  to  the 9th Armored Division Artillery’s Battery C, 83rd Armored Field Artillery Battalion.

He would depart Europe on 27 September 1945 on a troop ship transporting troops of the 9th Armored Division arriving in Hampton Roads, Virginia on 7 October 1945.  Shortly after processing at Camp Patrick Henry, Virginia he would be issued a train ticket and, on pre-separation leave from the Army, return to Connecticut.  He would separate from the Army at Fort Devens, Massachusetts on 14 October 1945. 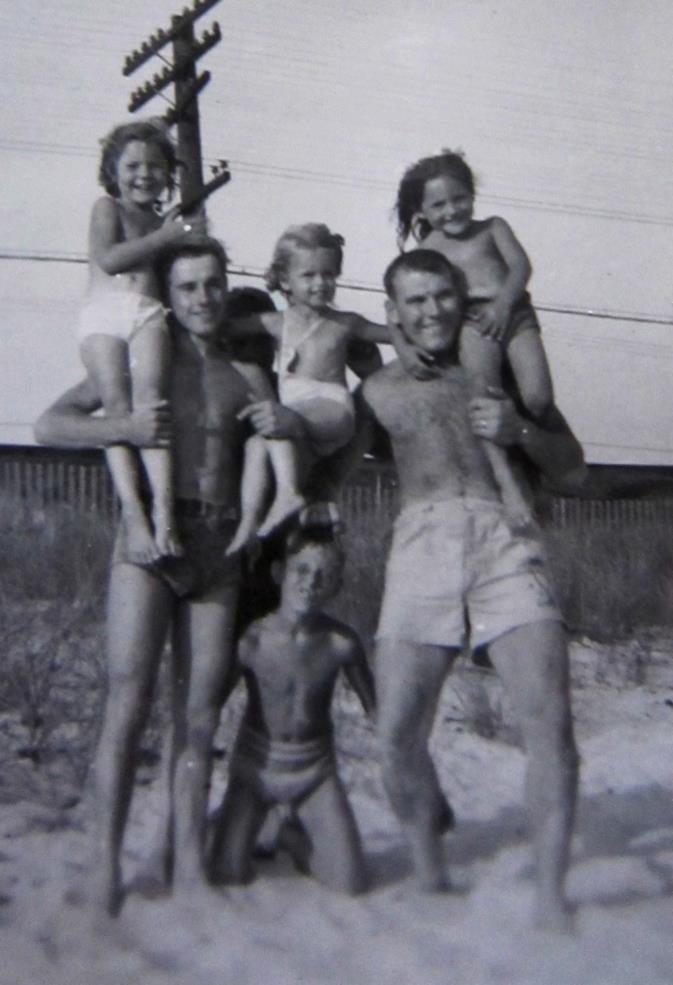 A citizen soldier’s reward for service, his family—left is George Rozman holding two of his nieces. His older brother Bob is to the right holding another niece and younger brother Earl is in between. Photo was taken on the Connecticut Shore at a family gathering shortly after the war. Bob Rozman was a four times wounded combat infantry veteran of the South Pacific. Brother Earl would later enlist as a signals soldier leaving the Army as a staff sergeant and pursuing a career as a draftsman. George Rozman’s brothers Henry and Carl were WWII veterans as well. Younger brothers Richard and Walter would also serve in the Army. Sister Elizabeth served in the Navy. All five of his brothers-in-law were veterans as well. The citizen’s service ethic was strong in this family.

The returned veteran would use his GI Bill to train and qualify as an electrician and would pursue a career with one of the United Technologies companies in the Hartford, Connecticut Area.  He would work a long career until retirement.

Shortly after return from the war the veteran married.  He remained married to his wife until his death in 2011 at 88 years old. He and his wife produced two sons and a daughter.  His oldest son served in the Unites States Marine Corps as a sergeant and one of his grandsons serves in the Marine Corps as well.

Always supportive of his family, his mother, his father, his seven brothers and five sisters and their spouses, he was always present at family gatherings.  He raised his own family well and was grandfather to five grandchildren when he departed.

A citizen who answered the call as a teenager, trained in arms and then fought the good fight, returned to civil life and became a responsible citizen, tradesman, husband father and grandfather, he set an example of meeting responsibilities and dependably and maturely meeting his life’s duties.  A practical man he was very capable in his trade.

But on a day starting on 6 June 1944, he and thousands of comrades fought their way ashore at Normandy, they broke out into Northern France, then the Rhineland and into the ferocious fighting of the Ardennes and the Bulge, then on to Central Europe and Czechoslovakia.  On a rare occasion he would remark on the terrible counter battery fire endured during the big fights.  His hearing greatly affected by his experience on a howitzer gun crew through such heavy fighting, he always spoke louder than others in a conversation and could not always hear what others were saying.

That was Uncle George, a divisional combat artilleryman that had fought through some of the largest battles in history and survived.  Some of his comrades were not so fortunate.   He had witnessed the worst these events had to offer.  Yet he came home, built a life to admire and was a good man who set an example for others to follow.

In his way, he was a leadership example that I, and my cousins, respected and emulated.  He was one of our very personal members of the greatest generation.   And he had come home from the war in October 1945 to live out the remaining 66 years of a very good and productive life that inspired us that followed to serve as well and live our lives accordingly.

Note: in George A. Rozman’s case and as mentioned in the vignette, the citizen service tradition continued into the following two generations of the family George Rozman and his wife Theresa built.  His son David served for almost a decade as a Marine, honorably discharging as a sergeant.  His grandson Gary Ludden is a serving Marine.  As a member of a family in which six of his brothers served in the Army, a sister in the Navy and five brothers-in-law who served in the Army and the Navy, George A. Rozman was a distinguished citizen member of the Greatest Generation.

Dr. B Asks, "What are you reading?" / Dr. B recipient of major award