The Commandant, BGen Sebastien Bouchard, as part of a recent regularly scheduled ‘parade’ had a special surprise for one staff member and two officer cadets:

The special occasion was the presentation of the Commandant’s Coin.

Not just any coin (see photo above). This shield design is the Cmdt’s and is quite unique. The RMC Graphic Designer, Christopher Boucher, was quite helpful in bringing this design to life.

What is the process on how it is determined who is presented with the coin?

Generally, names are brought forward to the Cmdt through the CCWO for consideration. The Cmdt also presents coins spontaneously when deemed appropriate.

The Cmdt’s Coin is not given out often. They are all numbered and registered by the Cmdt’s office.

We were able to get a copy of the script used to make the official announcement and presentation. 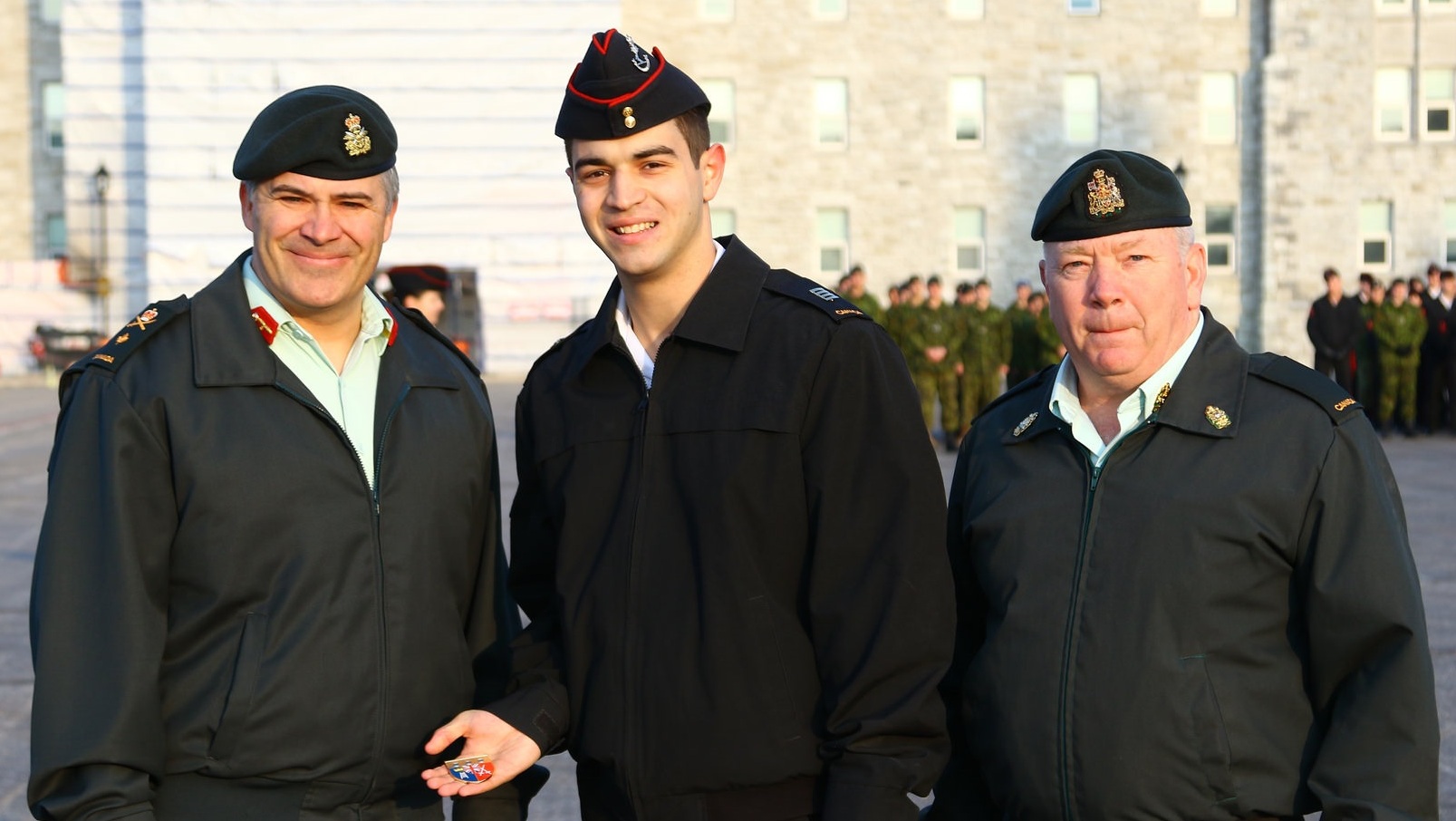 As the DCWTO, OCdt Roy has demonstrated great pride in RMC and conducts his duties with the utmost of professionalism. He inspects the dorm rooms daily and issues sanctions to those that are not following the rules.  He has shown up during parade practices to correct personal drill of the formed body on his own accord when not tasked to do so or on parade himself. Recently, OCdt Roy as the Vigil Party Commander for the Arch Remembrance Day ceremony not only trained and practiced the movements with the Vigil Party, but he stepped up in a truly military manner and assumed the Vigil for someone who had almost passed out.

OCdt Roy, 27178, is hereby presented with the Cmdt’s Coin as he demonstrates a clear understanding of the importance of the CoC, the Cadet CoA and what being an OCdt at RMC is all about. He is an excellent example of what all N/OCdts should strive for in all four pillars. 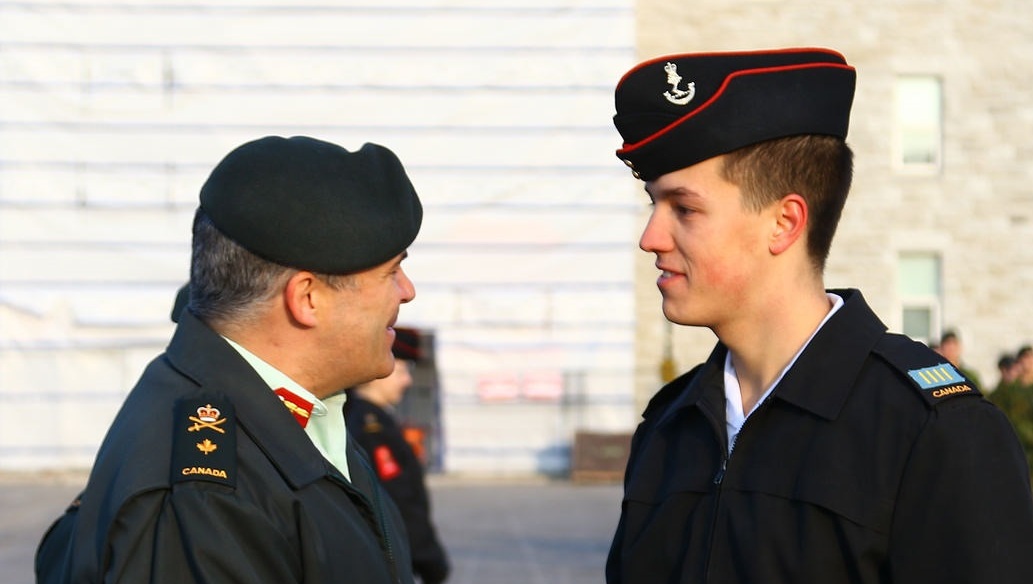 On 20 Feb 18 an OCdt was injured in a parachute accident at Palatka Airport, Florida.  He sustained a substantial injury to his left leg, breaking his femur after a hard landing on a taxiway light.  He was rushed to Orange Park Medical Centre for emergency surgery to repair the break and to be assessed for any other injuries.

In the wake of the incident, OCdt Nadeau dispatched a text message and follow on email to his Sqn Comd notifying him of the event.  Over the course of several hours, OCdt Nadeau was able to work with hospital staff, Blue Cross officials, and other members on scene IOT ensure the passage of timely and accurate information to his CoC.  This facilitated the reporting of the incident via the SIR and CCIR processes.  OCdt Nadeau’s dedication to service was paramount in ensuring that the injured OCdt’s affairs were being properly attended to, and that he was provided all the necessary care required, including assisting with his repatriation to RMC.

OCdt Nadeau, 27181, is hereby presented with the Cmdt’s Coin for his exceptional conduct following a parachute accident involving a fellow cadet during the Reading Week Break. 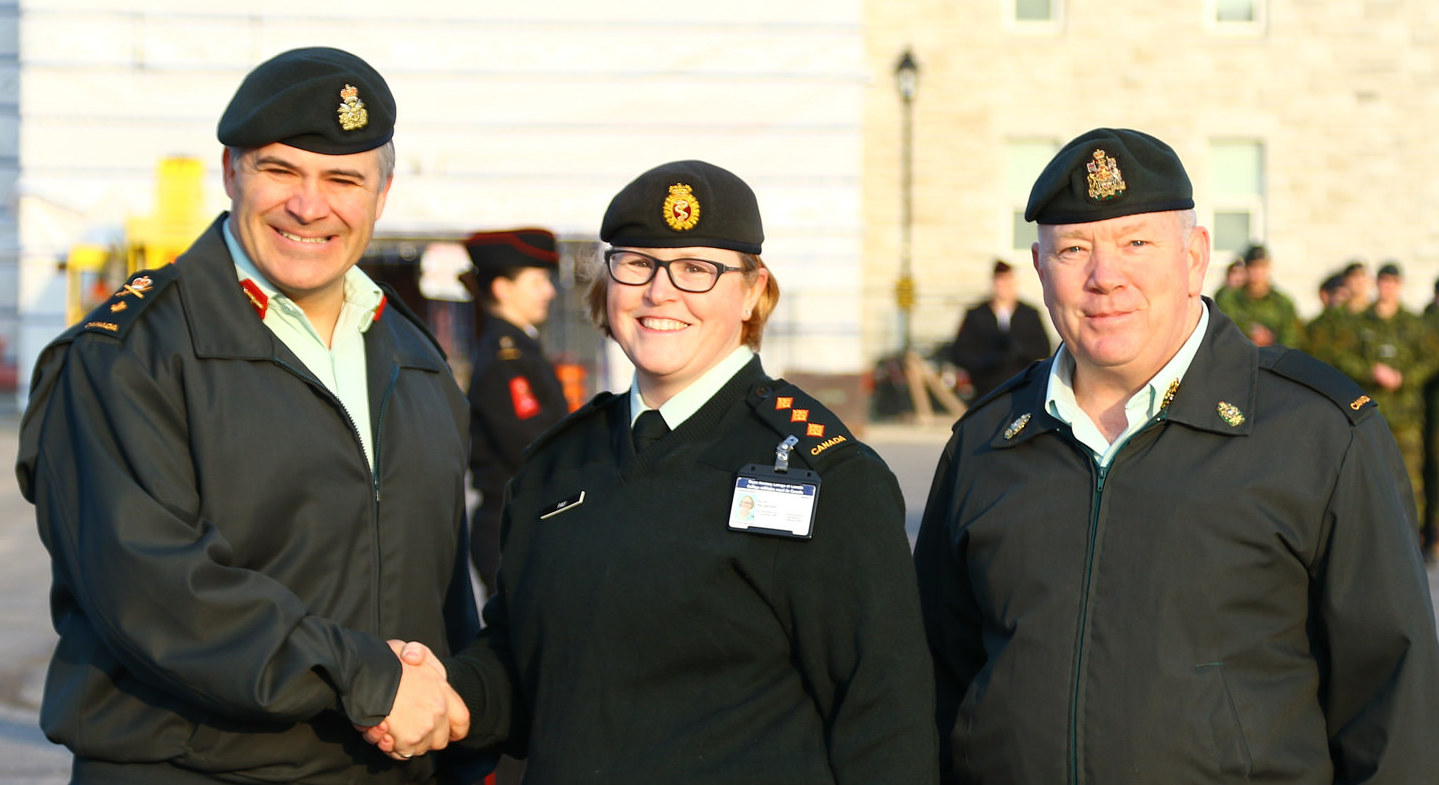 During a Sunday Mass  on 21 Jan 18, an elderly women slumped over appearing to have a medical issue. As a trained nurse, Capt Pay quickly rushed to her side to assist as best able before paramedics arrived.

Capt Paye is hereby presented a Cmdt’s Coin for her professional and courteous actions which reflect positively on RMC and the CAF.

More photos from the parade by OCdt Sharma – Here

28057 Colin Bond: The trials and tribulations of writing exams