He is the deputy director of education at the Canadian Forces College and an associate professor of defence studies at the Royal Military College of Canada.

RMCC commandant, BGen Eric Tremblay and wife Lieutenant Colonel Brigid Dooley-Tremblay were front row spectators.  Many other people from the RMCC community – including current and past military & academic staffs; officer cadets from all four years; PG students; family and friends of Dr. Chapnick also attended this celebration of his achievements.

The event was sponsored by the RMC Club of Canada Foundation. 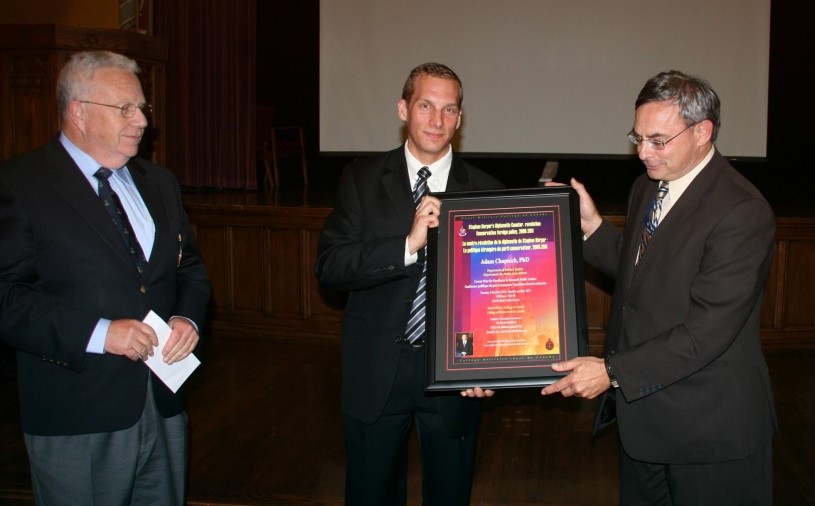 The Dr. John Scott Cowan Prize for Research Excellence was created to restore the fundamental symmetry of a university professor’s career; there was an award for excellence in teaching, but the aspect of research had been neglected. A problem with both awards was the fact that they were announced quickly, and did not leave a large impact.

“To make this recognition more visible, I decided to steal an idea used at the University of Ottawa. The two prizes were announced, and the recipients were made to ‘sing for their supper’ in a public lecture, and that seemed to work well,” said Dr. Cowan.

Friends, family, and colleagues of Dr. Adam Chapnick, the winner of the 2011 Dr. John Scott Cowan Prize, gathered at Currie Hall at the Royal Military College on October 4 to celebrate his achievement.

Dr. Sokolsky, Principal of RMC, introduced Dr. Chapnick. He is the Associate Professor of Defence Studies and the Deputy Director of Education at the Canadian Forces College in Toronto. He has been one of the College’s, and indeed Canada’s, brightest young scholars.

“Over the past decade, Dr. Chapnick’s publication record has been nothing short of prodigious with five books, more than 30 journal articles, and numerous op-ed pieces in prominent Canadian newspapers, magazines both in print and on-line,” Dr. Sokolsky said. “He is also a regular contributor to the magazine, University Affairs, where his columns on teaching and research strategies are among the most widely read pieces.”

“When I first met Dr. Chapnick at the CF College in Toronto, his youthful appearance made me think a Grade 6 student had gotten lost and wandered into the College,” Dr. Sokolsky laughed. “Even though he still has a youthful appearance, all of these awards and accolades confirm that Dr. Chapnick has established himself as the preeminent scholar in modern Canadian diplomatic history. With the presentation of the 2011 Cowan Prize for Excellence in Research, Dr Chapnick has added yet another honour to his ever growing list of accolades,” said Dr. Sokolsky.

Dr. Chapnick was “both shocked and flattered” to have his research recognized by being awarded the Cowan Prize. “Having now read more about the individual after whom this prize was named, I am even more humbled. John Cowan’s incredible career – as a researcher, a public servant, a university administrator, and an arbitrator – is overwhelming,” Dr. Chapnick said.

Dr. Chapnick ‘sang for his supper’ in his speech about Canada’s Foreign Policy over the past decade.

According to Dr. Chapnick, “the only revolutionary period began in 1996 when a Liberal foreign minister, Lloyd Axworthy, pursued an activist, spirited agenda, designed to simultaneously raise Ottawa’s diplomatic stature while also permanently altering the international landscape. The Axworthy doctrine was based on a series of principles and assumptions that diverged significantly from Canadian traditions.”

While Canada punches above its weight in many aspects, including military operations, its population size is so comparatively small that it lacks the capacity to “play a dominant role on the world stage.”

The Axworthy doctrine, however, saw Canada as a natural world leader, and it is only Axworthy’s immediate successor as foreign minister who stated that “when it comes to Canadian conduct on the world stage, ‘bland works.’”

Dr. Chapnick concluded his speech by imagining longingly what “the impact that Lloyd Axworthy might have made on the state of child poverty in Canadian cities or on the health of Canada’s indigenous communities had he been assigned a more domestically-oriented portfolio.”

Dr. Chapnick’s speech encouraged a lively exchange of ideas during the question period. His speech was illuminating, and aptly represented his considerable skill as a researcher and talents as an engaging speaker. Following the awards presentation, the audience enjoyed an opportunity to interact with Dr. Chapnick at a reception.