Article and Photos by 25366 Anna-Michelle Shewfelt

On Monday, July 22, 2019, in a simple, traditional event held in Currie Hall, CWO Garth Hoegi relinquished his position as College Chief Warrant Officer to CPO1 Marion Pivin. The centrepiece of the ceremony was the passing of the drill cane, which is carried by the College Chief on ceremonial occasions and which symbolizes the authority held by the bearer.

Prior to that moment, Chief Hoegi addressed those present. “This is a bittersweet day,” he said. “My tenure as the College Chief has been outstanding. I’ve worked with some really wonderful people and been able to understand just how much an impact the College has on the Forces (which is something you don’t get until you’re here). I was also privileged to be here at a time when the College was finding a new direction and to have been a part of changing the culture of this institution.”

Chief Hoegi also took the time to thank those who have helped him over the past three years. “If I mentioned everyone I’d like to we’d be here all day,” he joked, “but I’ll do my best. BGen Bouchard, thank you for your trust in me. Dr. Kowal and Dr. Bates, thank you for your guidance. It’s safe to say I now know more about university governance than I ever thought I would! Nathalie [Filion-Poitras], you are the rock that holds this place together behind the scenes. Karin and Cheryl, thank you for your friendship. I know it has meant the world to me and to LeighAnn. And my wife LeighAnn, thank you for your support and patience.”

“And to the NCM’s at the College,” he went on, “Never underestimate your influence on the Cadets. They will form their opinions of NCO’s from watching how you do business. Finally, to CPO1 Pivin, enjoy your time here. Have fun with the job!” 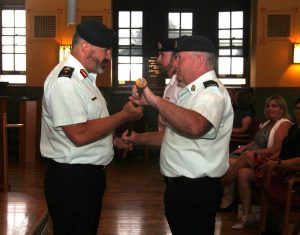 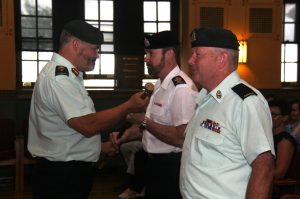 18777 BGen Sébastien Bouchard took the time to reflect on CWO Hoegi’s contributions to RMC over the last three years. “When Chief Hoegi was selected to come to RMC as RSM it was not a coincidence,” he explained. “He was selected because the CF knew he had the right approach for the job. And his first year was a critical time for the College as we dealt with the Auditor General and the Special Staff Assistance Visit. Chief Hoegi was instrumental in our success in those areas. As he said, it’s about changing the culture of RMC. Chief Hoegi was instrumental in building the unity of purpose we needed to do that.”

As BGen Bouchard went on to explain, “Here at the College we have the Command Team, which has been myself, Chief Hoegi, and Dr. Kowal. To be a good partner in that team you need three things, to be loyal to the unit, to give honest feedback, and to be united in the execution of the plan. Chief Hoegi had all those things. My job was easy because of him. And if you want to see just how much of an impact he’s had here, think back to the Carr-Harris Cup where the Cadets cheered for him for a full two minutes after the puck drop.”

BGen Bouchard also took the time to welcome CPO1 Marion Pivin. “You have the experience and the qualifications we need. I have full confidence in you.”

Following the passing of the drill cane, CPO1 Pivin, now officially the College Chief, thanked those present for the warm welcome. “It’s a great honour for me to join the College team,” he said. “I am eager to make a strong and positive contribution to ensure our mission success in preparing tomorrow’s leaders.”

Canso Investment Counsel Invites you to the Charity Golf Tournament

14458 Dr. Harry Kowal on his Upcoming Second Term as Principal of RMC