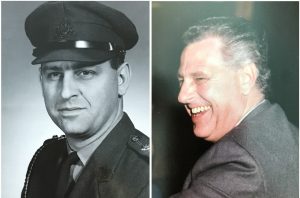 MURRAY, Robert George  – RMC#3573, RCCS, Queen’s B.Sc. Electrical Engineering ‘57
On Monday August 28, 2017 at the age of 83. Beloved husband of Sheila (née Lucas). Beloved father of Elspeth (Peter Richardson), Rob (Clare) and Andrew (Julie). Proud grandfather of Stephanie, Patrick, Chloe, Molly, Zachary, Genevieve, Avery, ‘associate’ grandfather of David (Akemi) and Alan (Lyndsay-Ann) Richardson and ‘associate’ great grandfather of Tristan, Eric and Sophie. Dear brother of John (Elizabeth), Jeanne and Jane, and uncle to numerous nieces and nephews. Friends are invited to gather at the Sacred Space of Beechwood Funeral and Cemetery Services, 280 Beechwood Ave. (east of Vanier Parkway) on Friday September 8, 2017 after 12:30 p.m. A Celebration of Robert’s Life will be held at 2 p.m. followed by interment at the National Military Cemetery of the Canadian Forces and a reception in his honour. In memory of Robert (Bob), donations to charities related to 2 of his great passions – RMC and gardening – will be appreciated. Donations supporting the RMC Museum Project, can be made by cheque payable to ‘Friends of Point Frederick’, and sent to P.O. Box 6, Kingston Main, Kingston, Ontario, K7L 4V6. Donations supporting Canadensis – The Garden of Canada, can be made via www.canadensisgarden.ca.

Greatly mourning his loss are his wife of 52 years, Janet (Barnum) Coulson, sons Michael and David, their wives Adrienne and Judi and grandchildren Adelaide, Finlay, Bennett and Grayden as well as many nieces, nephews, grand-nieces, and grand-nephews.

Peter Coulson was born in the front parlor of the Lovekin family home in Newcastle, Ontario. His father William (Bill) Coulson’s only sister, Helen (Coulson) Lovekin, had played match-maker when her brother Bill returned from WWI, pairing him with friend Evelyne (Wires) Minty.

Bill worked the lift in the Post Office on Adelaide St. in Toronto before trying his hand at farming on Amherst Island, and Evelyn worked at Birks in the import business. Together they invested every dollar they had into Peter, who worked his entire life to repay this debt to his parents, to his community to his own children and even his grandchildren.

While he joked that he “left Collège Militaire Royal before they could throw me out”, he successfully entered Queen’s University (Arts ’63, Law ’65) thanks to a loan from Principal Mackintosh. At Queen’s he met his love and life-long partner, Janet (Arts ’63).

Peter practiced law for a short time in Port Colborne, Ontario before becoming an Assistant Crown Attorney in Welland in 1969. He was appointed Crown Attorney in Napanee in 1976, and four years later was elevated to the Provincial Court, Criminal Division, splitting his time between Napanee and Belleville. In later years he would spread his judiciary duties across much of Ontario jovially remarking: “Have gavel; will travel”.

Not an overly academic jurist, Justice Coulson eschewed the mathematical precision of legal scholars to employ his own brand of moral pragmatism. In each case he strove to balance the facts and the individuals involved with the letter of the law, to mete out decisions that were just and not simply legally accurate. He was part of the creation of a judicial counselling system to support his colleagues on the bench who were going through immense job stresses. As a judge, he particularly enjoyed the privilege of marrying young couples.

He showed the same strong moral compass in his devotion to public service. He dedicated over 50 years to Rotary, building parks and pools, forging international ties via youth exchange, and pursuing lofty goals like the eradication of polio worldwide. He devoted much time and effort on the board of the Lennox and Addington County General Hospital as well as the Ontario Hospital Association, and gave generously to Queen’s and innumerable charities. And he took his boys to thousands of 6:00am hockey games and never once complained.

Peter put family and friends above all. His time and devotion to bringing us together will be one of the things we miss the most.

The family will host a visitation at MacCoubrey Funeral Home, Cobourg on Saturday, September 2nd from 7-9pm.

They will host a second visitation at Wartman Funeral Home – Napanee Chapel on Sunday, September 3rd from 1-3pm. Funeral Service will follow in the Chapel.

Surrounded by his loving family, George Earle passed away at home in Calgary on August 29, 2017 at the age of 75 years due to multiple myeloma.

George was born on April 25th, 1942, in Sydney, Cape Breton Island. He graduated with a Bachelor of Arts in 1964 from Royal Military College, where he flew CF-100s and Hercules aircraft. In 1965, George married Jennifer Sayer in Ottawa, later moving to Edmonton and settling in Sherwood Park in 1968 where they raised their three children. George worked for Canada Post, the University of Alberta, Alberta Culture and the City of Edmonton before retiring at the age of 53. George is survived by his wife Jennifer, children Rob (Robin), Jennifer, and Karen (Robert), as well as grandchildren Benjamin, Julia, Ryan, Eric, Peyton, Jenna and Alexia. He is also survived by son-in-law David Fleck. George was predeceased by his mother Christine.George lived his life by a code that was based on respect and honour and taught his family to do the same.

On George’s request, a private family gathering was held to celebrate his life. If friends so desire, donations may be made in George Earle’s name to Salvation Army Canada or the Edmonton Humane Society. Heartfelt thanks to Dr. Keith Laatsch for his compassionate care.

A Wily Soldier of the Insurrection and the Cossacks