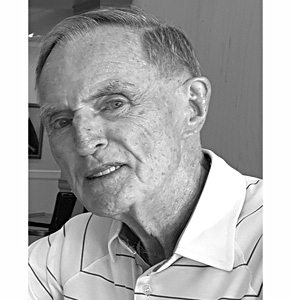 MacDONALD, Malcolm Jerome Major (Ret.) RCAF Passed away in the loving arms of his daughters at the Royal Jubilee Hospital, Victoria, BC, on November 15th, 2017 after suffering a stroke. Malcolm “Mac” or “Cuddles” as he was affectionately known, was born in New Waterford, Nova Scotia June 20, 1928, to Angus A. and Honora MacDonald. He was predeceased by his 6 siblings, and his infant son Gerard born 1960. He is survived by his cherished wife of 66 years Mary (nee Abbass) of Victoria, his daughters Honora Johannesen (Sigurd) of Victoria, Lillian Szpak (Robert) of Langford, BC, Ann-Marie (Alisa) of Montreal, his son John-Hugh (Mary) of Orillia, ON, and 9 grandchildren and 8 great-grandchildren. Mac was the kindest, most generous, sensitive, wisest and wittiest man there ever was. A coal miner and boxer from a tough Cape Breton town, he put himself through St. Francis Xavier University while working in “the pit” and was commissioned as an officer in the Royal Canadian Air Force in 1954. He served at Namao, AB; Baden-Soellingen, Germany; Centrallia, ON; Hamilton, ON where he earned his MBA from MacMaster University; Kingston, ON where he taught at Royal Military College and Queen’s University; and Ottawa, ON before launching a sterling career with the Department of External Affairs where, during his final working years he travelled to nearly every Canadian embassy abroad, usually with Mary – his “little dark-haired nurse” – by his side. In retirement he devoted himself to humanitarian work with the Canadian International Demining Corps, and together with Mary served meals at the Shepherds of Good Hope soup kitchen in Ottawa. A voracious reader and keen thinker, Mac was respected, admired and much sought-after for personal and professional advice by all who knew him. He instilled in his children, grand and great-grandchildren a sense of adventure, humour, self-reliance, respect for diversity, resiliency and optimism, and that each were special and loved uniquely. He honored Mary with a life well-lived, full of love, adventure, romance, devotion and dignity. The family wishes to thank the Emergency Room staff at RJH who, along with Dr. Fred Voon provided the kindest and most comforting care. We would also like to thank Drs. Michelle Fretz and Laura Farrell for their unfailing expert care and compassion. A Private Funeral Mass was held Monday, November 20th, 2017 at Mount St. Mary Hospital, Victoria, BC, followed by an open reception from 6 – 8pm at the Royal Colwood Golf Club. Internment to be announced, at Beechwood Cemetery, Ottawa, in June of next year. In lieu of flowers, please consider donations to Mount St. Mary Hospital 861 Fairfield Rd, Victoria, BC V8V 5A9. Condolences may be offered to the family at www.mccallgardens.com

David passed away peacefully in Victoria General Hospital at age 88. He is survived by his wife of 57 years, Lis, his sons Robert (Tasia) and John, his grandsons David and Phillip, his sister Elspeth (Jim) Helmcken. David attended Royal Canadian Naval College from 1945 to graduation in 1947. Thereafter he graduated with an MBA from The University of British Columbia and articled with Price Waterhouse. In 1955 he qualified as a Chartered Accountant. He then worked in accounting at CP Air from 1955 to 1974 whereupon he continued in private practice until his retirement in 1987. In the spirit of Service Above Self, David joined Vancouver South Rotary Club in 1977, was President (1987/88) and went on to become Rotary District Governor of District 5040 (1996/97). He worked with Rotary District 5010 (Alaska, Yukon, Siberia) to promote Rotary in Russia (esp. Siberia). During this period the David and Lis Ker Endowed Scholarship Fund for Russian students was established. Later they became members of the Arch. C. Klumph Society. Among David’s greatest pleasures were his worldwide travels, time spent in the air as a recreational pilot and in particular air races in Europe in the 1950s. He also took great pleasure in time spent with family and friends, especially on Salt Spring Island and in Denmark. In lieu of flowers, donations can be made to The Rotary Foundation at www.Rotary.org/donate . A Memorial Service is to be held at St. Mary’s Kerrisdale, 2490 W 37th Ave, Vancouver, BC on December 30, 2017 at 2 p.m.