January 7, 1947 to February 3, 2018 Richard (71 years old) passed away peacefully February 3, 2018 surrounded by his family. He is survived by his loving wife Judith Easton and sons Mathew Easton Baccari (Chelsea), Richard Todd Baccari (Marina) and Trevor Baccari (Rochelle). He also leaves three beautiful grandchildren Samantha, Alexander and Kaden (Trevor’s children). He was a loving uncle to Natalyee, Joshua, Ashlee, Sara, Oscar and Chloe as well as wonderful brother-in-law to Barbara and Sylvia. Not only was Richard a loving family member, but he was also a friend to all. Richard entered the military as a private and became one of the first to graduate from the UTPM program at the Royal Military College in Kingston. After a 25-year military career, he became the head of transportation for the 1988 G8 Economic Summit in Toronto, the Francophone Summit in Quebec City and the Commonwealth Summit in Vancouver.

He then formed Baccari Property Management Company in Kingston and ran it for 25 years. Richard was a member of St. Andrews by the Lake United Church and on the board of St. Mary’s Hospital. He was the president of the Kingston Rotary Club, receiving the Paul Harris Fellow Award. After retirement, Judith and Richard spent 14 winters at their golf community condo in Fort Myers, Florida where Richard happily golfed to his heart’s content. While there, his contributions continued as he organized the building of the new club house for their Hideaway Golf Community in Florida. Judith and Richard travelled extensively during their 40 years together. In Kingston he was a long standing member of the Cataraqui Golf and Country Club. Many of the members being close friends of Richard’s and a great support to Judith during this difficult period. The family would like to thank the staff of the Community Care Association which allowed Richard to spend 2 of his last weeks in the comfort of his home. They also wish to thank the supportive staff of the Providence Care Centre, Heritage Wing. A Celebration of Life will be held at the GORDON F. TOMPKINS FUNERAL HOME Township Chapel at 435 Davis Drive on Saturday, February 10, 2018, 2:00-4:00 P.M. 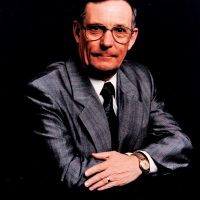 Loving father to Patrick (Andrea Brownlee) and Lysa (Trevor Smith). Proud and cherished grandfather to Annabel, Kian and Darcy. Dear brother of Danielle (André Beauparlant) and Michel (Laurence). Friends are invited to pay respects and celebrate Réjean’s life at the Hall of Colours of Beechwood Funeral, Cemetery and Cremation Services, 280 Beechwood Ave. (east of Vanier Parkway) on Friday February 16th between 1 to 4 p.m. A private family interment will be held at the National Military Cemetery of the Canadian Forces in spring. In lieu of flowers, donations may be made to Hospice Care Ottawa (www.hospicecareottawa.ca) 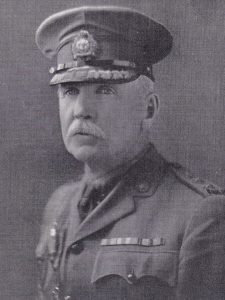 Since his retirement in 1922 from the R.C.M.P., he had been living quietly in Ottawa, and in more recent years had lived with his daughter and son-in-law, Colonel and Mrs. G. L. Jennings. He was ninety-five years of age at his death – a tribute to a remarkable constitution and to an indomitable spirit with which, fo fourty years, he faced the adventures of a frontier country.

Major-General A. B. Perry was born in Napance on 21 August, 1860. On 1 June, 1876, he entered the Royal Military College, and was given the College number 13, but this did not prevent his abilities bringing him to first place when they all graduated in June, 1880. He won the Governor-General’s Gold and Silver Medals and reached the rank of Company- Sergeant-Major and Cadet second-in-command. On his twentieth birthday he was gazetted but he later suffered a compound fracture on his right leg in a carriage accident. He saw a medical specialist in London, who gave him an unfavourable report, and felt it necessary to resign his commission in 1881.

For a few months after his retirement from the R.E., he held a position in the Geological Survey of Canada, but on 24 January, 1882, was appointed to the North West Mounted Police as an Inspector and for his services in the North-West Rebellion was promoted to the rank of Superintendent on 1 August, 1885. In 1900, after eighteen years of service, he was appointed Commissioner of the Force and retained that position until he retired in April, 1922, with the Rank of Major-General. From the time when his first assignment took him to the slopes of the Rockies in 1882 until he retirement, he was concerned with most of the historical highlights of the West.

He was at Fort MacLeod when the Riel Rebellion of 1885 broke out. On one march, he led his forces 928 miles in 38 days, and it was this campaign which gave him and understanding of the problems of the half-breeds and Indians. In April of that year he was sent to Calgary where his force was increased to 250 of all ranks, and the march to Edmonton was commenced. Included in his command were members of the 65th Mount Royal Rifles. Edmonton was reached on the 13th day. Considerable difficulty was experienced in the crossing of the Red Deer River, when Perry, assisted by Constable Diamond, almost lost his life in landing a tow-rope attached to an improvised raft on which were the field gun and its equipment. After the rebellion he was placed in command of “F” Division, with headquarters at Prince Albert, where, during the summer of 1887, suitable barracks were erected.

On 30 November, 1887, as Superintendent, he wrote the Commissioner: “The Mounted Police must therefore have the confidence of the public, as an Offensive as well as a Defensive Force, if its full benefit is to be obtained.” On 3 December of that year Perry made the following significant remark in a report to his superiors: “Whenever it is found that aid must be given an equivalent in the shape of work should be demanded, that is, employment should be offered rather than relief, except of course to the widowed, infirm, and sick.”

After leaving Prince Albert on 19 September, 1889, he was in command of Regina until 16 March, 1897, and was then given the command of Calgary district (which he held until the autumn of that year). While in command of Southern Saskatchewan he found time to take up the study of law and became articled to the firm of Haultain and Mackenzie at Regina. At the end of three years he passed all examinations with honours, and was called to the Bar of the North-West Territories.

In 1897 he left Calgary for special duty in British Columbia, and in the following year, visited the Yukon to maintain law and order during the excitement of the Gold Rush. This move led, on 26 September, 1899, to his succeeding Superintendent S. B. Steele to the command of the Yukon. At that time there were two divisions in the Yukon: “B” at Dawson under Superintendent Primrose and “H” at Tagish under Superintendent F. T. Wood. During April 1900, he handed over this command to F. T. Wood, and in the following August was promoted to Commissioner of the Force.

At this time the Force was in rather an unsettled state; its total strength was about 900 men, of whom 250 were in the Yukon. Nearly 200 had left to join the Canadian Contingent for service in South Africa. With Commissioner Perry began the modern era of the Force. He made changes in the uniform, introducing modern dress and equipment. As the population of the North West increased in numbers from about 113,000 to 350,000, so the numbers of crimes to be dealt with increased also.

On 24 June, 1904, the Canada Gazette announced that His Majesty the King had been pleased to confer the title of “Royal” upon the Force. During 1905 the new provinces of Alberta and Saskatchewan were formed, but by arrangements with the new governments the Force continued to function until 1917. On 9 November, 1909, Commissioner Perry was made a Companion of the Order of St. Michael and St. George.

In 1897, on the first occasion for a detachment of the North West Mounted Police to go overseas, the command of 30 N.C.O.’s and men had been entrusted to him to take part in Queen Victoria Diamond Jubilee Celebrations. Again in 1911, he was given command of the contingent of 6 Officers and 83 men sent to England to represent the Force at the Empire Celebrations held in connection with the Coronation of King George V.

In 1914, on the outbreak of war, Perry suggested the Force should go overseas to act as a Cavalry Unit. Subsequently, squadrons from the Force were spared to go overseas to Europe and Siberia.

The Canadian Government looked to Perry for accurate information respecting internal conditions of Western Canada and were never disappointed. After the Great War, in 1919, there was a serious strike in Winnipeg. The advice given by Perry to the Government led to the successful ending of trouble.

In 1919 the Government decided to form one Dominion Force to act in its behalf throughout the whole of Canada, with Headquarters at Ottawa. The former Dominion Police, which gave police supervision to Government buildings at Ottawa, the Naval Dockyards at Halifax, and elsewhere, were absorbed by the Royal North West Mounted Police Force, and instead of two Federal Police Forces, only one remained, which was called the Royal Canadian Mounted Police. From 1 February, 1920, the Royal Canadian Mounted Police has carried out Federal duties from one end of the country to the other. Working out the necessary details threw an immense amount of work upon Commissioner Perry, but they were all completed by 1 February, 1920, and the Force, which had been increased in strength to 1500 men, was ready to face the afterwar period of reconstruction. 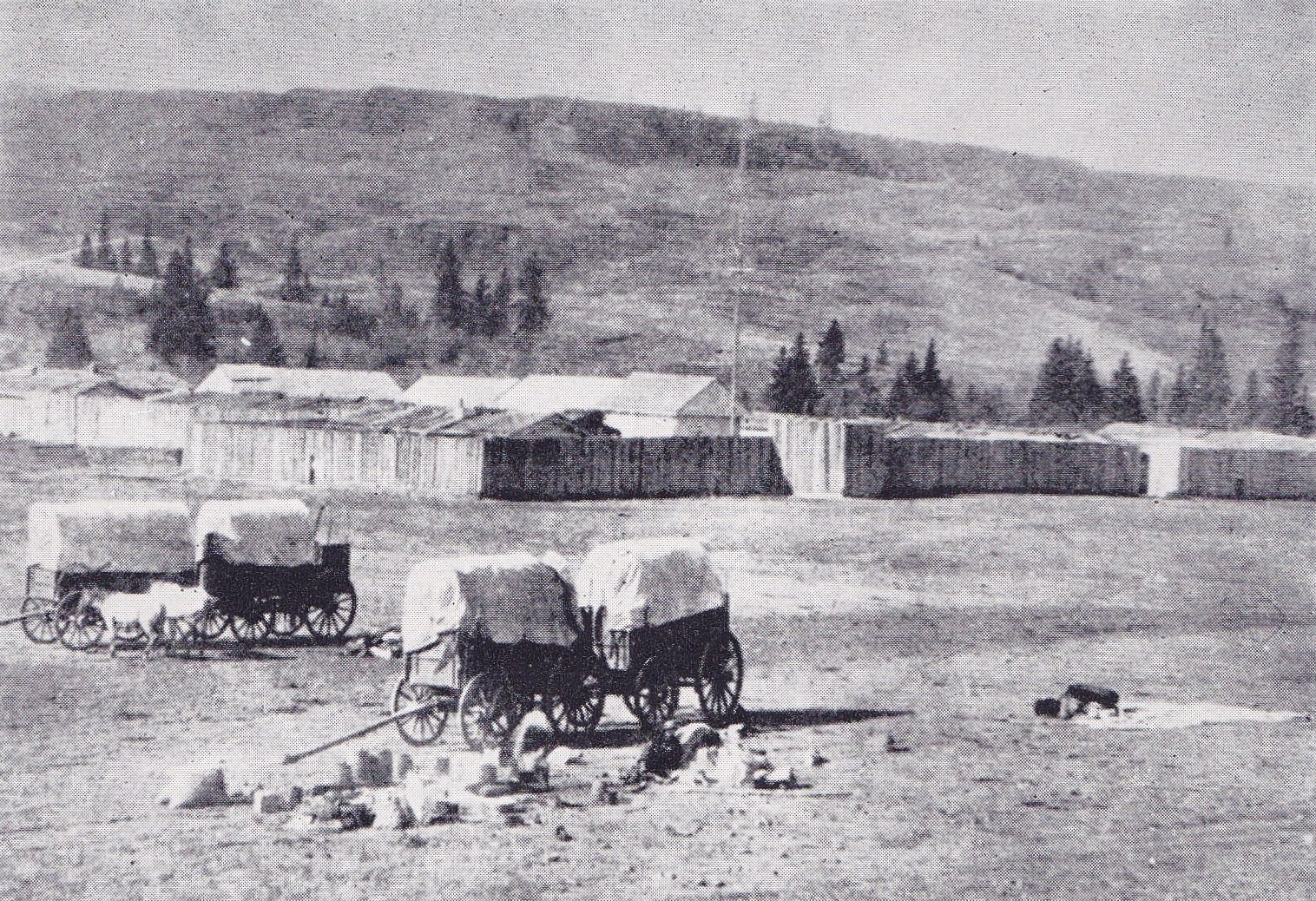 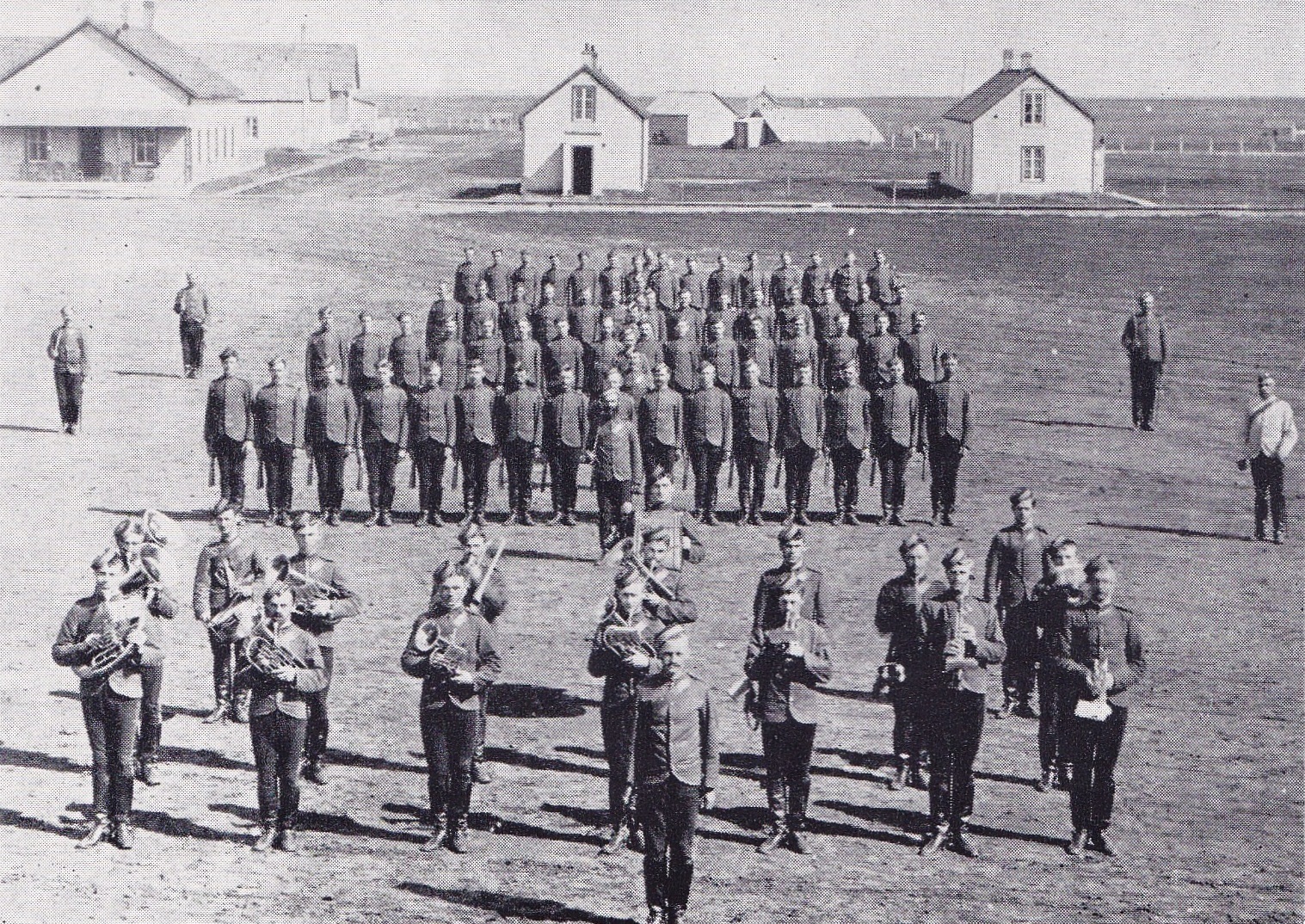 The development of the of the West, the extension of duties to the North and Hudson’s Bay required him to make many and difficult decisions, but brought out his ability and leadership, which will ever remain a great example to present and future officers of the Royal Canadian Mounted Police.

Mention should be made of his work in organizing police patrols in Canada’s great northland, including one on Ellesmere Island. In this way he fortified Canada’s claim to those vast tracks of land which run northward to the Pole. Amongst his friends were such notable individuals as Father Lacombe, the Rev. John McDougall, the War Chief of the Black Foot Confederacy, Jerry Potts, Sam Steele, Cecil Deeny, and many others.

When he retired in 1922 he was given the rank of Major-General by the Government in recognition of his outstanding service to Canada. For many years he was an Honorary Vice-Patron of the R.M.C. Club of Canada, and on many occasions in recent years he took the salute of the march past of ex-cadets at their annual reunion at the College.

To keep alive the memory of his name, General Perry leaves behind him the record of a long lifetime of influence for good. He added so much to the tradition and fame of the Mounted Police. By emphasis on respect for justice and fair play he sought to break down racial hatred. He helped to make the frontier country of the West a place where lawlessness could not abide. He showed that modesty can be a regular companion of greatness, that a first-class job can be done without thought of reward or recompense. He loved the Great Plains where the horizon kept beckoning to the early adventures and luring them westerly and northerly, ever receding as they followed. He so often spoke of the feeling that came to him as he travelled far and wide on his patrols of the utter immensity of the Western plains.

Perry of the Prairies has gone on his last patrol. The example of his life of service, efficiency, and leadership will be an inspiration to every cadet and ex-cadet. His name will live on forever be honoured at this College. 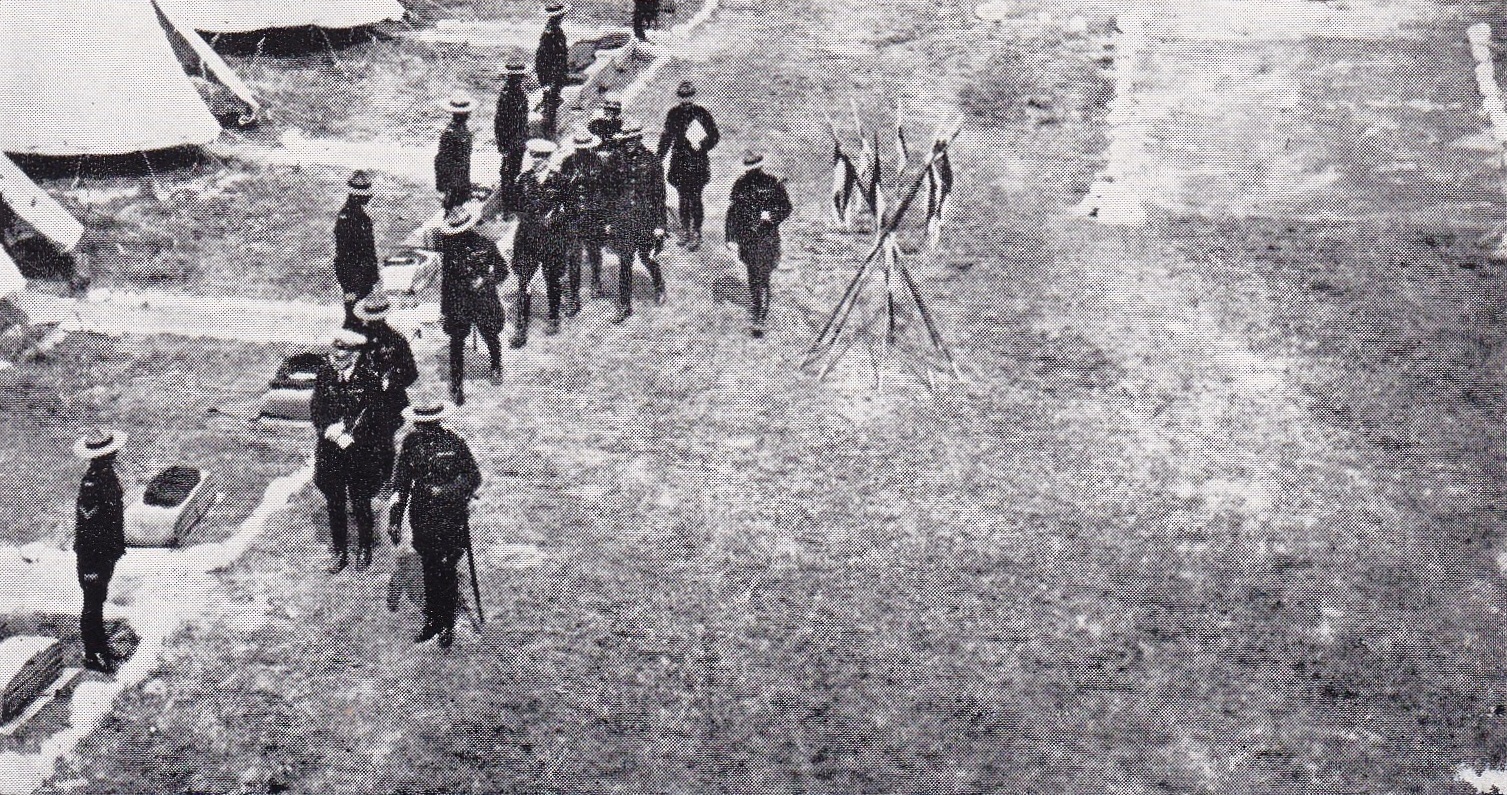