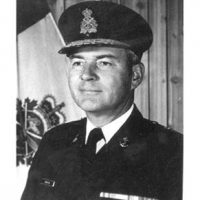 MARTIN, Michael Arthur Rear-Admiral RCN (Ret’d) Rear-Admiral Michael Martin (Ret’d) RCN, CF passed away peacefully in Victoria, at the age of 90, on 27 January, 2018. Born 25 July, 1927 in Calgary, AB, son of the late Capt. Arthur Martin and Gwendoline Martin (nee Hopkins). The Admiral is survived by his beloved Patricia (nee Greer) devoted navy wife of 66 years; by his son Peter (Yvonne/Bonnie); by his daughter Annie Shea (Michael); by his son Andrew (Teresa) and grandchildren Matthew, Michael, Andrew, Daniel, Maeghan, Joscelin and Keira, whom he delighted in and often referred to as his scallywags. Raised in Kingston, ON he was a Wolf Cub, Boy Scout, Sea Scout and Sea Cadet. Upon graduation from KCVI, in 1944, he entered Royal Roads Naval College to embark on his thirty-six-year naval career. Admiral Martin served two tours in Korea aboard HMCS Athabaskan & HMCS Cayuga. In the early 1960s, he was an exchange officer with the USN, serving as a Sr. Watch Officer during the Bay of Pigs and involved in the retrieval of astronauts Grissom and Glenn in Mercury flights 2 & 3. Returning to Canada in 1962, he commanded HMCS Ste. Therese & HMCS Skeena, was Deputy Chief (Combat Readiness) at Maritime Command in 1967, and Commander of the 2nd Destroyer Squadron in 1970. In 1974, he served as Canada’s Naval Attache in Washington DC. In 1977, he was promoted to Rear Admiral – Commander of Maritime Forces Pacific and Commander Pacific Region. He and Patricia retired from the Navy in 1980. His love for the sea, and his country was self-evident as he went on to hold leadership roles throughout the community including the Victoria Harbour Commission, Expo ’86, the Maritime Museum of BC, and BC Ferries. His legacy will live on through the Admiral Martin Navy League Cadet Corp, established in 1978, as well as the Disabled Sailing Association of BC (DSABC), Victoria Branch, which annually award the Admiral Martin Trophy following their New Year’s Day Regatta. A celebration of life, followed by a Naval scattering of ashes at sea, will be scheduled for later this year. In lieu of flowers, the family asks that donations be made to the DSABC, Victoria Branch, 4135 Lambrick Way, Victoria BC V8N 5R3.

Leaders must know the “real” requirements and stand up for them