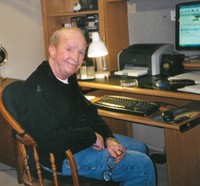 WHITEHEAD, Roger Wayne December 6, 1936 – April 3, 2018 It is with deepest sadness that Roger’s family announces his passing at home surrounded by his loved ones. Roger (beloved son of Edna and Milen) will be forever cherished by his wife of 59 years Colleen (nee Gallagher), son Paul (Debbie), daughters Linda (Mark) and Karen, and grandchildren Ryan (Sasa), David, Adrienne, and Zach. Roger completed his education in Kingston graduating from the Royal Military College in 1958 and Queen’s University in 1959, obtaining a degree in Electrical Engineering. After their marriage, he and Colleen went to Halifax where Roger served in the Royal Canadian Navy.

Upon returning to Toronto, Roger began a 30-year career with Ontario Hydro, retiring as the Director of Power System Operation Division in 1993.

Friends may call at the Turner & Porter Butler Chapel, 4933 Dundas St. W. at Burnhamthorpe, on Thursday from 5-8 p.m. Funeral Mass will be held at St. Gregory’s Catholic Church, 122 Rathburn Rd., Toronto on Friday, April 6, 2018 at 12 noon Interment Park Lawn Cemetery. For those who wish, memorial donations made to the MS Society would be greatly appreciated. Online condolences may be made through www.turnerporter.ca Loved in life, cherished in death.