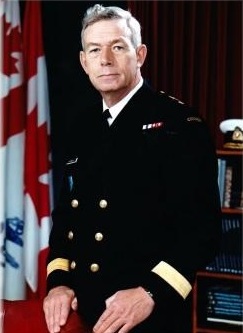 He is survived by his wife of 61 years Avril Harwood (Caton); children Janet Methot of Oakville, ON; David Harwood of Chatham-Kent, ON; Jennifer Harrison of Toronto, ON.  He was father-in-law to Paul Methot, Lisa Harwood, and Mark Harrison.

Born on August 9, 1932 in Chatham, Kent, England, John was the son of the late Arthur and Winifred “Win” Harwood, and brother to Mary Suddon (of Toronto, ON).  John immigrated to Nova Scotia as a seven-year-old boy. Even as the family moved inland to Ontario, John was drawn to the sea and as a young man pursued a career in the Royal Canadian Navy. He would serve from 1951 to 1987. He commanded HMCS Qu’Appelle, HMCS Saskatchewan, HMCS Saguenay, and HMCS Algonquin.  As Captain (N), he served as Commander Fifth Canadian Squadron. He was promoted to Commodore in 1983, and would serve as Commander Canadian Fleet and MARCOM HQ as Chief of Staff (Operations) before his retirement in 1987.

In retirement, John turned to apple growing in the Annapolis Valley; cider making; model engineering at the Trecothic Creek & Windsor Railway; and worked as a board member and president of the Blomidon Naturalists Society.

Visitation will be held from 6-8 p.m. on Monday, May 21, 2018 in the White Family Funeral Home Kentville.  The funeral service and reception will be held at 11:00 a.m. Tuesday, May 22, 2018, in the Pereaux Baptist Church, Reverend Mike Veenema officiating. Private burial at a later date. Family flowers only by request. Donations in memory of John Harwood may be made to the CNIB. The Harwood family would like to extend grateful thanks for the exceptional care of the doctors and nurses at Valley Regional Hospital.

Note from editor: An earlier version of e-Veritas had an error with this obituary. We regret the error.

OAKES, John Joseph March 3, 1934 – Hamilton, Ontario
April 20, 2018 – Calgary, Alberta
John Oakes beloved husband of Patricia Oakes (nee Speers) of Calgary, AB, passed away on Friday, April 20, 2018 at the age of 84 years. After graduating from Royal Military College with his class in 1958, John attended the University of Toronto where he obtained a Civil Engineering degree. John joined the Chevron Group in 1961. Over the next seventeen years, he completed various operational and technical management assignments in Vancouver, BC; Tahiti, French Polynesia; San Francisco, California and London, England. He was also a member of the Society of Automotive Engineers, and served for a time as the Chairman of the American Society of Lubrication Engineers in Vancouver, BC. He moved to Turbo Resources Ltd. in 1978 to work as a Senior Technical Specialist (Fuels and Lubricants) in Vancouver and Calgary. In 1993, John formed Oakes Petro-Chem Services Inc. The company offered consulting services in petroleum chemistry. He later worked for many years as a consultant in Calgary for Boss Lubricants as Technical Director. Besides his loving wife, Patricia, John is survived by his daughter Janet Fisher; daughter and son-in-law, Karen Oakes and Kevin Kisiloski; four grandchildren, Austin, Adam, Aaron and Katie. He is also survived by his sister and brother-in-law, Jane and Clint Magill; brother David Oakes; as well as his niece and her spouse, Anne and Danny O’Brien and their children. John was predeceased by his parents, Bertha and Lloyd Oakes and his sister Susan Oakes. After his mother’s death, he was also very close to his step-mother Isabelle Oakes (nee Houston) who raised him from the age of five. There will be a get together with friends and family at a later date where we will all share the happy times we had with John. Condolences may be forwarded through www.mcinnisandholloway.com. In living memory of John Oakes, a tree will be planted at Fish Creek Provincial Park.

Passed away on May 17, 2018 at the age of 66. Son of Pauline and the late Louis. Beloved husband of Amparo Torres. Loving father of Michelle Johanna and step-father of Juan, Hugo and Paola. Cherished grandfather of 7. Dear brother of Mario and Martin. He will be missed by many family members and friends. A Memorial Service was held at Beechwood, Funeral, Cemetery and Cremation Services, 280 Beechwood Avenue (East of Vanier Parkway), Thursday May 24, 2018 . In memory of Guy, donations to the Canadian Cancer Society would be appreciated. Tribute may be sent via www.beechwoodottawa.ca