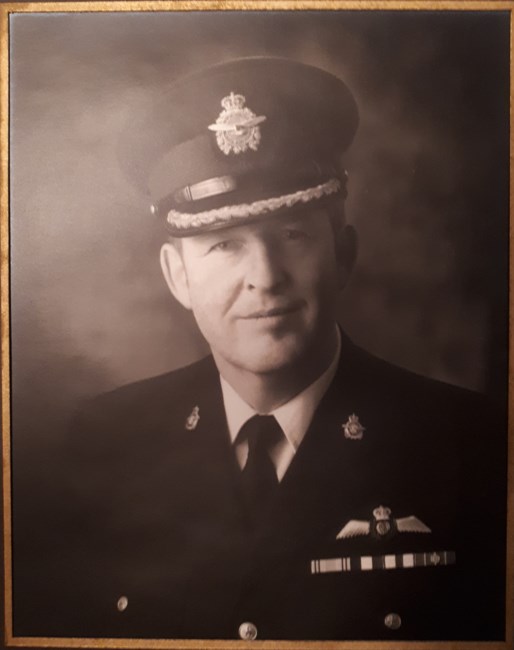 MCLELLAN, Brigadier-General ALLAN (Retired), CMM, CD
It is with great sadness the family announces the passing of Brigadier-General (Retired) Allan McLellan of Halifax, age 86, on June 15, 2018 after a defiant and courageous battle with lymphoma. Born in 1932 in Vipond Mine, Ontario, Allan was raised in Rouyn-Noranda, Quebec. Following graduation from Noranda High School, he attended RMC in Kingston, graduating with a Bachelor of Arts degree. Allan trained as a navigator in the RCAF, training with 426 and 435 Transport Squadrons in Canada and Japan.

After commissioning in 1954, Allan served with 404 Maritime Patrol Squadron in Greenwood, N.S., then with 436 Transport Squadron in Lachine, QC. In 1955 he served as Detachment Commander for the Overseas Ferry Unit in Narsarssuak, Greenland, which ferried F-86 Sabre fighter aircraft from Canada to the RCAF Air Division in Europe. He also served with the Air Transport Unit, supporting the UN Emergency Force in the Middle East, flying troops and supplies between Italy, Egypt, and Lebanon.

In 1957, after being posted to Winnipeg, Allan married the love of his life, Jean (Gillis), of New Brunswick. There, he was on staff with the Central Navigation School. He was also editor of the RCAF’s air navigation magazine. In 1960, he was a staff officer in Officers’ Postings and Careers. In 1964, as a new Squadron Leader, Allan began a one-year tour of duty with the International Commission for Supervision and Control in Vietnam. He spent six months in South Vietnam, and six months in North Vietnam, near the height of conflict during the Vietnam War. Following his return to Canada, Allan attended RCAF Staff College in Toronto, followed by two years at Canadian Forces Headquarters, Ottawa, developing career policy for the unified Canadian Armed Forces.

In 1968, he became Commanding Officer of 405 Maritime Patrol Squadron, in Greenwood, N.S.. Three years later, he was posted to Lahr, West Germany, where he served concurrently as Base Administration Officer and Senior Staff Officer for Personnel and Administration at Canadian Forces Europe Headquarters. Promoted to Colonel in 1973, he became Deputy Commandant and Group Director at the CAF Command and Staff College in Toronto. In 1975, Allan began a two-year tour as Deputy Commander of Maritime Air Group in Halifax. He was then selected to attend a one-year course at the Royal College of Defence Studies in London, England. In 1979, he returned to Greenwood, N.S., this time as Base Commander. Following promotion to Brigadier-General in 1982, he was appointed Commander of Maritime Air Group in Halifax. In 1984, he was posted to Ottawa, serving as Director General, Conditions of Service, then Chairman of the Charter Working Group, Director General, Charter Office, and finally Chairman of a new Charter Task Force. In June 1986, he was invested in the Order of Military Merit in the grade of Commander. Retiring in 1988 in Halifax, he served for two years as the Honourary President of the Atlantic Group, RCAF Association. At the same time, he was Third Vice President of the Federal Superannuates National Association. In 1994, the Minister of National Defence appointed Allan to serve on the Minister’s Armed Forces Pension Advisory Committee. Allan was a lifetime member of VPI.

Allan was predeceased by his parents, William and Ivy McLellan; his brother Peter McLellan; and his grandson, Tanner Smith-McLellan. He is survived by his loving wife Jean; son Douglas (Dale), Halifax; and son Peter (Julie Ricketts), Lower Sackville, N.S..

The family wishes to thank the many medical staff at the V.G.; Infirmary; ER; VON; and Allan’s family doctor, Dr. F. Vincent, who all provided him with treatment, care and comfort over the past five years.

Cremation has taken place. There will be no visitation. A gathering of family and friends will be held at a later date. In lieu of flowers, please consider making a donation to either Waldenstrom’s Macroglobulinemia Foundation of Canada, or Children’s Wish Foundation of Canada.