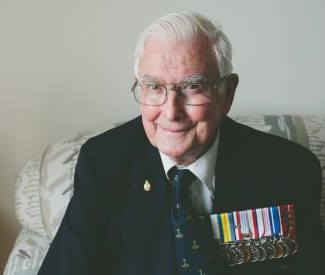 Major-General (Retired) Herb C. Pitts, MC, CD was born on 14 June 1929 in Nelson, British Columbia. He joined the Canadian Armed Forces (CAF) in 1948 as a cadet at Royal Roads Military College. Upon graduation in 1952, MGen Pitts was commissioned into Lord Strathcona’s Horse (Royal Canadians) and quickly sent overseas to the conflict in Korea. His time as an armoured officer was short-lived. Upon his arrival in Korea, he was immediately transferred to Third Battalion Princess Patricia’s Canadian Light Infantry (PPCLI) and served as a platoon commander. MGen Pitts would serve with distinction for the remainder of the Korean War and was recognized with the Military Cross for gallantry in action. He returned to Canada in July 1953 just prior to the ceasefire.

From 1953 to 1954 Lieutenant Pitts studied at McMaster University in Hamilton, Ontario. Upon return to Regimental Duty he served with the First Battalion, Queen’s Own Rifles of Canada (QOR of C) in Calgary, and then as a Staff Officer with the 4th Canadian Infantry Brigade Group in Soest, West Germany. In 1960 he attended the British Army Staff College at Camberley. Upon graduation he was posted to Army Headquarters in Ottawa, where he served for two years as Aide de Camp to the Chief of the General Staff. Upon promotion to Major, he served from 1962 to 1964 as a Company Commander with the Second Battalion QOR of C. He was again posted to the 4th Canadian Infantry Brigade Group, and served for over two years as the Brigade Major.

In 1967 Maj Pitts was promoted to the rank of LCol and given command of the First Battalion, QOR of C, in Victoria, B.C. This battalion was designated 3 PPCLI in 1970. From 1969 to 1971 he was posted as an exchange officer at the U.S. Army Command and General Staff College at Fort Leavenworth, Kansas, following which he attended the National Defence College in Kingston, Ontario. In 1971 Pitts was promoted to the rank of Colonel and posted to Edmonton to command the Canadian Airborne Regiment (CAR) for two years where he would play a critical role in developing the airborne capabilities for the Canadian Forces. From 1973 to 1975 he served at NDHQ as a Brigadier-General in the capacity of Director-General of Land Operations. Promoted to Major-General in 1976 he was appointed Chief of Land Operations. Following French Language training in 1977, he served in his final appointment of regular service as the Director-General, Bilingualism and Biculturalism until his retirement in 1978.

After MGen Pitts retired, he would continue to be close to the serving and retired components. Ever-dedicated to his regiments, he served as Colonel of the Regiment for the PPCLI and the CAR and later as the Honorary Colonel for the Queen’s Own Rifles of Canada, accumulating more than 44 years of uniformed service. MGen Pitts also served as the National President of Scouts Canada and was instrumental in the completion of the Korean War Memorial Wall at Meadowdale Cemetery in Ontario with KVA Canada.

He was predeceased by his son Danny in 1989 and by his sister Doreen Englund in 2017.
He is survived by his brother Bob and his children Jennifer, Lori, Jim, Kathy, Bob Jr and Tom and two nephews Brian and Don Englund

A Memorial Service will be held on Friday 19 October at the 1st Metropolitan United Church at Balmoral and Quadra at 1200 hours. A reception will follow in the Church Hall.

In lieu of flowers please make a donation to The Princess Alexandria Bursary, Boy Scouts of Canada, or the Princess Patricia’s Canadian Light Infantry Foundation.

8247 Dave Cogdon – Class of 1970, passed away on Sunday, Oct 7th. . He had been ill for quite some time. No further details available at this time.