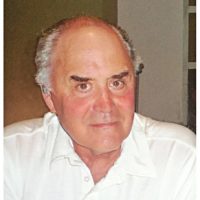 Richard George Ratcliffe passed away peacefully in Victoria on October 16, 2018 at the age of 78.

Survived by his loving wife Elaine, son Jeff (Mimi) Ratcliffe, daughter Katharine (Brad) Harrold and extended family Lisa (Terry) Mellett and Matt (Gina) Gillberg. Sister Adelle (Monty) Clements and niece Alana (Ian) Clarke. Grandchildren Cassie, Mackenzie, Cody, Ben, Logan, Scott, Ryan and Adam. Deeply loved by family and friends. Richard made a positive impact on the lives of those he touched, which were many. He completed his high school education in Kamloops where he excelled in athletics. Very involved with the Boy Scouts as a young boy, he attended the World Jamboree in 1955. Richard graduated from Royal Roads and Royal Military College with a degree in chemical engineer. He served a full 35 year career with the Royal Canadian Engineers. He served across Canada at many Bases and Units. He retired in the Base Engineers at CFB Esquimalt at the rank of major. He had fond memories of the time he served as the first Army Combat Diving Officer and his deployment as a Peace Keeper in Egypt. While raising his family and moving around in the military, Richard enjoyed frequently being called upon to support the local swim clubs. While in the army he obtained a Master’s in Business Administration and following his military service he worked in HMC Dockyard as the Industrial Engineer in the Ship Repair Unit. Richard had a passion for the outdoors and cherished a life time of memories made at the family property on Niskonlith Lake. Later in retirement Richard and his wife enjoyed vacationing in Mexico. Richard cared deeply about his family and friends and will be remembered for his warm nature. His kindness, intellect, care of animals along with his sense of humor and laugh will remain in our hearts and memories.

The family is grateful to the nurses and caregivers at the Selkirk Seniors Village in Victoria and the many neighbors, friends and family that have been so supportive over the last few months. A Celebration of Life will be held on November 5th, 2PM at First Memorial, 4725 Falaise Drive, Victoria, BC.

Bernie Hamel died last week. He was on the RMC staff for a number of years. We did not have an obit at press time.  Details that we know to date: