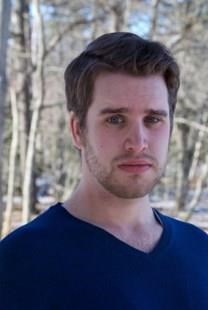 Age 32, of Halifax, passed away at home surrounded by the love of his family on Sat., Jan. 28, 2017. Born in Halifax, he was a son of Peggy (Young) and 10903 Paul Amyotte – RMC Class of 1976, a brother of Jonathan (Shelley), Sarah and Lauren, and a grandson of Edith and the late Harold Young, and the late June and late James Amyotte (all of Halifax/Dartmouth). He is also survived by many aunts, uncles and cousins, including his Godfather, Uncle David, in Hong Kong.He was predeceased by Aunt Dale (Amyotte).

Matthew was raised in the communities of Cole Harbour and Saint Vincent de Paul Parish where he was an altar server, lector and religious education teacher. He enjoyed many outdoor activities with his big brother as they participated in Cubs, Scouts and Venturers, attending CJ’97 together in Thunder Bay. Matthew himself was a source of endless entertainment and fun-filled drama as a big brother to his sisters when they were at home, and later when they all lived and worked in Halifax. He revelled in the richness of life in north-end Halifax and built lasting relationships there with friends who shared his passion for all things local, slightly different, and somewhat retro.

Matthew amazed all who knew him as a consummate performer devoted to developing and honing his artistic skills. He was drawn to the performing arts at an early age with his enrollment in Musical Friends at the Canadian Conservatory of Music. Piano and voice lessons, and self-teaching on guitar, resulted in his unique ability to pick up just about any instrument and play for the sheer love of music (and his mother who often requested a special performance). Encouraged by wonderful teachers in the Fine Arts Program at Prince Andrew High School, and motivated by his participation in the Nova Scotia Secondary School Students’ Association (NSSSA), he attended Dalhousie University graduating with an Honours Bachelor’s degree in theatre and music. This opened up a bountiful world of diverse experiences and lives touched, fully captured by Matthew’s favourite J.R.R. Tolkien quote: “Not all those who wander are lost.” Cesky Krumlov in the Czech Republic for Baroque theatre performances; Newfoundland for a big-budget Hollywood movie; Saint-Pierre for a gig with his rock band The Art Of; Chester for Haven screen readings; numerous performances in local film and live productions (including the Bus Stop Theatre and Neptune Theatre main and studio stages) – culminating in his work in the film There Are Monsters, for which he received Honourable Mention for Best Actor at the 2013 Atlantic Film Festival. Matthew was also a published illustrator, having worked with his father on creating and drawing an impish character for a scientific book.

Although Matthew truly radiated happiness when acting on stage, music was his life-long love and creative force. Whether performing himself or directing others in musical performance at the Grafton Street Dinner Theatre and Saints Alive! Theatre in Halifax, and Diamond Tooth Gerties Gambling Hall in Dawson City, Yukon, Matthew was fully in his element. At the tender age of 21, he became the Musical Director of the Youth Performance Company (YPCo) at Neptune Theatre. Over the next 11 years, he filled this role on numerous occasions while also teaching acting classes at Neptune. Matthew immensely enjoyed working with young, aspiring performers and was especially drawn to those who needed a few kind words of encouragement to recognize their own gifts of talent and self-worth. His final performance was on Dec. 10, 2016 with his beloved YPCo on the Neptune stage. The next day he returned to his family home in Cole Harbour to be embraced by the love of his parents and siblings.

Visitation will be from 2-4 pm and 6-9 pm on Wed., Feb. 1 in Cruikshank’s Funeral Home, 2666 Windsor St., Halifax. Funeral Mass will be celebrated at 11 am on Thurs., Feb. 2 in Saint John XXIII Parish, 35 Colby Dr., Cole Harbour; Father Irek Bem presiding. Private burial will follow at a later date.

The family would like to thank all members of Matthew’s dedicated and compassionate medical and support teams (hospital, and palliative and home care). You helped make it possible for us to care for our beautiful son and brother in an environment that brought him peace and comfort. Donations, if desired, are requested to be made to Neptune Theatre YPCo, or the Brain Tumour Foundation of Canada.  Source