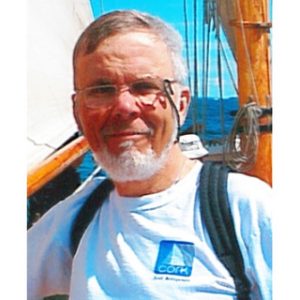 Alan was a passionate and dedicated teacher who, in his twenty-three year career of elementary education, inspired so many and gave so much of himself to his vocation. Both his larger-than-life personality and active involvement in the Kingston community ensured that he touched the lives of many.

He was devoted to working with young people, and enriching their lives through education, sailing, and leadership. Alan believed that all youth should be able to learn with confidence, joy and imagination. He attained the rank of Commander in the Naval Reserve.

A past Commanding Officer of HMCS Cataraqui, he devoted many evenings, weekends, holidays, and summers to running training exercises locally and aboard ships on both coasts. The Brigantine St. Lawrence II became a lifelong passion after he joined the senior crew in 1964. As a volunteer, he rose to be senior captain and operations manager, and gave decades of service as a member of the Board of Directors. He continued to volunteer until he attended his last brigantine board meeting a few weeks before he died.

Alan served as Aide-de-Camp to four Ontario Lieutenant-Governors, from the Honourable John Black Aird through the Honourable Hillary Weston. He had a distinguished volunteer career with many organizations in the community and committees of council at City Hall. He served on the boards of the Marine Museum of the Great Lakes and the local branch of the Navy League of Canada.

In 1996, Alan suffered a traumatic brain injury after being struck by a motor vehicle while riding his bicycle. Although seriously impaired, he continued to serve the community through countless hours of volunteer work at Providence Manor, Fairmount Home, and with organizations such as CORK and the Salvation Army Kettle Campaign. Alan’s injuries could never dampen his enthusiasm and devotion to the community he held so dear. Recognized many times for his civic service, Alan’s awards include the Queen’s Silver Jubilee Medal, the Queen’s Golden Jubilee Medal, the Canada 125 Medal, and the Canadian Forces Decoration with Bar. The family wishes to express gratitude to the many long-time friends who have helped Alan live his life to the fullest both before and after his injury. Special thanks are due to Dr. Pelletier and the dedicated team who have helped Alan continue living in his own home and carry on with his passion for serving others.

A Celebration of Alan’s Life is being planned for the spring. Memorial donations may be made to Brigantine Inc. (St. Lawrence II).

He completed both his elementary and secondary education in Raymond, graduating in 1950 from Raymond High School.  He then enlisted as Aircraftsman 2nd Class in the RCAF.

He was selected in the “Serving Airman Plan” and entered Canadian Services College Royal Roads in 1952.  He graduated from the Royal Military College in 1956, and continued to the University of British Columbia to acquire his BASc in Electrical Engineering in 1957.

He worked on several programs including the CF105 (Arrow), the BOMARC missile, with assignments to NATO in Europe and NORAD in North Bay ON.  He served periodically at NDHQ (which he considered a dubious honour) in every rank from Flight Cadet to BGEN.

Sugi was the first Canadian of Japanese descent to be accepted at Royal Roads; the first officer from the Class of RMC ’56, as well as his class at the Canadian Forces Staff College, and the first graduate of the “Serving Airman Plan” to attain General Officer rank.  However, his most cherished accomplishment was qualifying as a Battle Commander for the NORAD Region with Headquarters in North Bay, apparently the only non-aircrew officer to do so.

In private life, Sugi married  Noriko Ikuta in 1961, and they raised two children, a son Akira Kyle born Jun 24, 1965, and a daughter Takeko Alana born Dec 14, 1968.  Their daughter and her husband have raised Sugi’s two granddaughters.  Unfortunately, his first marriage ended in divorce in 1986.  He subsequently met and married Wendy Hilborn, whose hometown happens to be Waterloo ON, and they settled in to their Waterloo home.

Since leaving the armed forces, Sugi worked as an engineering consultant as well as a project manager, but then retired completely.  The golf courses in the area as well as their backyard pool and garden occupied his time in the summer.  In the winter, the local ski hills and trails did likewise 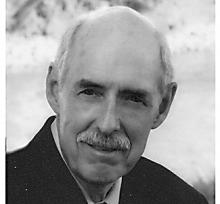 MARSHALL GRANT BAILEY January 4, 1936 – February 22, 2017 It is with great sadness we announce the passing of Marshall Grant Bailey of Pinawa, MB at the age of 81, at Health Sciences in Winnipeg on February 22, 2017. Grant is survived by his beloved wife Bonnie and their three children, Bryan and wife Jennifer of Kingston, ON., daughter Kerri Ann and husband Jim Swanson, and Glenn and wife Susanne of Winnipeg, MB. He is also survived by one brother, Gary and wife Sigrid of Vancouver, BC. He leaves nine grandchildren, Laura Bailey Pridmore, Karyn Bailey, Steven Bailey, Robert Swanson, Kevin Swanson, Matthew Swanson, Kaelyn Bailey, Alyssa Bailey, and Syrah Bailey. He is also fondly remembered by brothers-in-law and wives; Allen and Susan Dahl of Portage la Prairie, Grant and Joanne Dahl of Listowel, ON, and Mervin Dahl of Calgary and many nieces and nephews. Grant was born in Portage la Prairie, and predeceased by his parents Merle Bailey and James Bailey. Graduating from Ryerson Technology in Toronto in 1961, Grant worked two years at Atomic Energy of Canada in Deep River, Ontario as a Chemical Technologist and then transferred to the Research site at Pinawa in 1963. Grant and Bonnie were pioneers in the newly built town of Pinawa. They lived and raised their family in this beautiful town for 54 years. In earlier days, he was an excellent, competitive curler. He enjoyed ancestry research, dancing, gardening, golfing, making wine and winter vacations in Palm Desert. His family and friends were very important to him. He will be missed and remembered for many fun times and his unique sense of humour. A Celebration of Life Service will take place on Saturday, March 4, 2017 at 2:00 p.m. at the F.W. Gilbert School in Pinawa. Flowers gratefully declined. If desired, donations in Grant’s memory may be made to Siloam Mission, 300 Princess Street, Winnipeg, MB R3B 1M3. SOBERING FUNERAL CHAPEL & CREMATORIUM, Beausejour 268-3510 or MB Toll Free 1-877-776-2220 www.soberingfuneralchapel.com