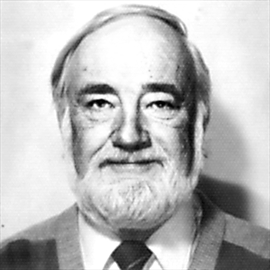 GALL, Carl Evert “All the world’s a stage, and all the men and women merely players; They have their exits and their entrances, and one man in his time plays many parts.” Carl Evert Gall, Professor Emeritus, in Chemical Engineering (University of Waterloo), Varsity Athlete, Polymath and Humanist died March 20, 2017 at age 85 at Grand River Hospital, Kitchener-Waterloo, Ontario, Canada.

Carl was born December 17, 1931 in Burlington, Ontario, third son – and first born in Canada to immigrant parents Jan (John) and Johanna (de Hoop) Gall of Friesland, Netherlands. His depth of love, humanity, ideas and wit will be cherished by his surviving daughters Carlaine, Alison and Suzanne, brother Rudolph (Nancy), family and friends. He was predeceased by his wife Elaine (nee Mertes), daughter Gwendolyn ‘Glendy’, brothers Wessel (Marny surviving), John (Gail surviving), Harold (Maureen), and parents John and Johanna Gall. Carl was a beloved husband, father, uncle and mentor to many who miss him. As a boy he translated Frisian, Dutch and English for his family, and excelled at Latin, French, German, athletics, math and sciences at Burlington High School, and won an engineering scholarship to the Royal Military College (“Dutch” Gall, RMC’53). Carl’s “ideas and convictions gained the respect of all and made him pleasing to know.”

After graduating with a B.A.Sc. ’55, University of Toronto, Carl moved to Montreal as a translator for Imperial Oil, where his first daughter, Carlaine, was born in 1956. Inspired by adventure and the love of his wife Elaine, Carl undertook a teaching commission in engineering at the University College of Addis Ababa, Ethiopia for four years of educating, building bridges and exploring Africa and Europe.

With Elaine and now two children (Gwendolyn, born in Addis Ababa) Carl returned to teach at the Royal Military College in Kingston, Ontario. In 1960 his third child, Alison, was born while Carl also obtained an M.Sc., 1962, at Queen’s University and won a Ford Scholarship. Carl’s scholarship in mathematical analysis took him to the University of Minnesota to earn his Ph.D. with Rutherford Aris. There, in 1964 his fourth daughter, Suzanne, was born. That fall, Carl joined the University of Waterloo Chemical Engineering Department where he remained until his retirement.

During his tenure, he also played an instrumental role in developing computer technology for engineering education with Hewlett-Packard, in the nascence of “high-tech” at Waterloo. Carl believed that a science education was not enough to understand or live life without a love for the Humanities. His gift for Shakespeare and theatre led him to act at the Stratford Festival (Ontario), in TV, movies and commercials, and to teach and direct award-winning K-W Little Theatre and Theatre of the Absurd productions at the university. With colleagues, family and friends, Carl will be remembered for helping to develop a vital community at Waterloo. Cremation has taken place. Condolences for the family and memorial donations to AMREF Health Africa in Canada may be arranged through the Erb & Good Family Funeral Home , 171 King St. S., Waterloo at 519-745-8445 or www.erbgood.com

3047 Professor Dutch Gall, as he is listed in the RMC Club directory, or Carl Gall as I knew him, was on the College faculty in 1961 during my time there, but not known to me then. He “caught up” with me in 1964, when he joined the Chemical Engineering faculty at University of Waterloo, where I was a student by then. I had him for one course, and he was one of the faculty advisors for us on what today would be called a “capstone” project. He was part of the inspiration that made me go to graduate school, also specializing in applied mathematics and physical systems theory. He became a colleague when I joined the UWAterloo Chemical Engineering faculty in 1971, and we were part of an informal applied math, physical systems, control engineering group within the department. He was also one of two of the faculty who had involvement in the local theatre scene (the other was an opera singer), who was a model for students, and the rest of us, showing that one could be an engineer and an “artsie”! When I left the faculty in 1988, I continued an informal association with the department, especially after I returned to the UWaterloo staff in 2001. By that time Carl had retired, but we occasionally crossed paths on social occasions. In recent years he became somewhat reclusive, but I did keep up with what was going on in his life through one of his daughters, who married the son of another Chemical Engineering colleague and friend, whom I see once in a while at events of that family.

The Matriarch—a Towering Leader at 5’ 2”: With Canadian Roots