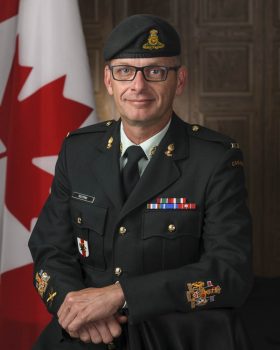 Robert is survived by his spouse, Valérie, of Kingston, and their two sons, Tristan and Alex. He also leaves behind his father Charles, his mother Bonita, his brother Trevor, and his daughter Jessica.

The family wishes to extend their gratitude to the Canadian Armed Forces, as well as to the staff, faculty and officer cadets of the Royal Military College their kindness, condolences and support during this difficult time.

Robert was born in London, Ontario, to Charles Vernon Keating and Bonita Elizabeth Greene LaFond on November 23, 1970. He went to high school at Georgian Bay Secondary School in Meaford, Ontario, graduating in 1988. He joined the Canadian Armed Forces in January 1989 in London, Ontario, as an Air Defence Artilleryman. He later served in CFB Baden-Soellingen, West Germany, and at CFB Chatham and CFB Gagetown in New Brunswick. He deployed twice in service to Canada. First, to Bosnia-Herzegovina on Operation PALLADIUM in September 2001, and again, in 2007, as Troop Sergeant Major for Joint Task Force Afghanistan. He was posted to Canadian Forces Base Kingston, Ontario, in June 2015, and selected to be the Training Wing Chief Warrant Officer at RMC in June 2017.

For his service, he was awarded the Canadian Forces Decoration, General Campaign Star – SOUTH-WEST ASIA, Special Service Medal (NATO Bar), Canadian Peacekeeping Service Medal, and  NATO Medal for Former Yugoslavia. He was promoted the rank of Chief Warrant Officer in 2017.

Robert will be missed most for his compassion, humour, and the joy he brought to everyone in his life. He loved the outdoors, and his easy smile will be remembered best whenever we think of him hunting, fishing, playing hockey with his boys, or spending quiet days with his family. He will be forever honoured by his fellow “Gunners” who knew and appreciated his professionalism, proven time and again throughout a Canadian Armed Forces career that spanned more than 30 years as a member of the Royal Canadian Artillery. Likewise, the officer cadets of the Royal Military College of Canada, will remember the sergeant major whose pace stick, firm voice and attention was always with them on the College’s parade square — mentoring them, encouraging them, challenging them, and exemplifying what it takes to be a leader. His example will not be forgotten.

Family and friends were received at the James Reid Funeral Home, 1900 John Counter Blvd., on Sunday, May 5, 2019. A funeral service was held at St-George’s Cathedral, 270 King St. East, Kingston, on Monday, May 6. A reception followed at the Royal Military College’s Senior Staff Mess after the funeral. In lieu of flowers, memorial donations may be made to the charity of your choice.

A Look Back: The Pay Officer