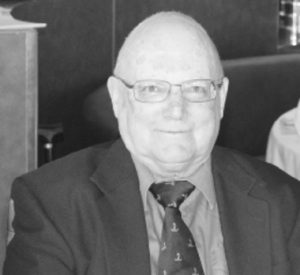 Bob passed away in his 80th year, on August 28, 2019 surrounded by family, in Ottawa. Bob will be missed by his loving second wife, Kitty Jones of 35 years, and first wife of 17 years, Suzanne Agur Frogley. Beloved father of Michael (Maureen), Mark (Lauralyn), Katherine Kurtz (Craig), and dear stepfather to Elizabeth Baldwin-Jones and James Baldwin (Tara). Proud grandfather to Alexander, Stefanie, Erika, Alison, Macy, Jayvon, Devin and Thomas. Bob will be missed by his brothers Charles (Barbara), John (Sandra), Bruce, sisters-in-law Irene and Lois, as well as his many nieces and nephews. Following Bob’s retirement from the Military in 1975, he continued his career in Civil Service, retiring as Full Director (EX) level from the Department of Supply and Services. Bob was the consummate, all welcoming host, a man of integrity, and enjoyed every moment of life, sharing his joy with everyone around him. The family would like to extend a special thank you to the palliative care team at The Governor’s Walk, especially Joanna. As well, a special thank you to Dr. Thompson and her team of dedicated palliative doctors. Friends and Family are invited to visit Beechwood, Funeral, Cemetery, and Cremation Services, 280 Beechwood Avenue, on Monday, September 9, 2019 from 10 a.m. until a Celebration of Bob’s Life in the Sacred Space at 11 a.m. Interment in the National Military Cemetery of Beechwood to follow at 12 noon. In lieu of flowers, in memoriam donations to Scouts Canada or the Canadian Cancer Society would be appreciated.

Richard was born on September 19, 1957 in Greenford, England. He moved to Burlington, Ontario with his family in 1965, joining sea cadets at RCSCC Iron Duke in high school. He attended the Royal Military College of Canada, receiving his bachelor’s degree in Mechanical Engineering, and making many lifelong friends. On graduation, he married Liz, with whom he made a wonderful life and raised six children over 40 years of marriage. He served in the Canadian Navy for nearly 22 years, living in Victoria, England, Halifax, Kingston, Ottawa and Toronto. In the service, he served in HMC Ships Mackenzie, Qu’Appelle and Preserver, earned a master’s degree in Mechanical Engineering from RMC, and held various shore positions, including a rewarding job with the Canadian Patrol Frigate project. On retirement from the forces as a Commander, he worked in the marine private sector, living in White Rock, BC. He later answered the call of the navy again as a public servant, moving to Victoria to hold senior positions at the Fleet Maintenance Facility, and finally worked part-time for the Naval Engineering Test Establishment after his second ‘retirement’. He had only recently retired for good when he became ill in 2018.

Richard not only had a strong sense of responsibility for his family but also for his country and for society, and seemed to have a limitless capacity to support all of these. He volunteered on many boards and executives over the years, even whilst raising his young family. He was most recently honoured by the Navy League of Canada for his leadership in establishing and growing a scholarship program that has benefited many sea cadets as they moved on to post-secondary education.

Richard was preceded in death by his parents, Fred and Vee, and his sister, Anne. He is survived by his wife, Liz (n. Brennan); his children, Simon (Shannon), Tim (Katrina), Mark (Olga), Richard (Natalie), Peter (Patricia) and Becky (Kory); his grandchildren, James, Keira, Julian, Hanna, Naomi, Vincent and Blake; and his siblings, Joan, Peter and Stella. A funeral service will be held on Monday, September 9th, 2019 at noon at St. Andrew’s Cathedral on View Street in Victoria. Donations may be made to the St. Vincent de Paul Society.

The Value of NCOs