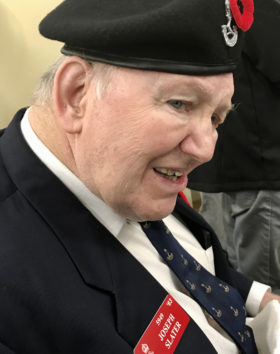 Just a short note from to let you know that my father, Joseph (Joe) Edward Slater died peacefully while surrounded by family and friends on Wednesday, November 13, 2019 at Veterans Memorial Lodge at Broadmead.

He asked that we let you know.

At Royal Roads Joe was active playing on the soccer and fencing teams and a member of the college band.  At RMC he tried out for the hockey team which “resulted in him having to repeat his third year”.  However he was again in the band playing the bass drum, “anything to get away from carrying a rifle on parade”.  In his final year he was D/CSL of number three squadron.

He was stationed at RCAF Station Trenton and then the Radar Base in Gypsumville, MB.  In 1967 he joined the federal water resources branch of Environment Canada in Winnipeg and became the director of the branch in Ottawa in 1979.  He finished his time with the government as Director of Environmental Emergencies.

He retired in 1999 to his country home on Crow Lake with his wife Sandi (nee Allan).  He was very active in the Greater Bobs and Crow Lakes Association and the Friends of the Tay Watershed.  He was a long time executive member of the Crow Lake Community Association and was the moving force behind the renovation of the village school house.  Sandi died in 2003 after 38 years of marriage.

Joe stayed at Crow Lake until 2011 after which he moved to Victoria, B.C. and married Noreen Greig.

Joe has been struggling with a significant decline brought on by progressive supranuclear palsy (PSP) over the past several years. He chose to end his life, while he was still in control, with the aid of MAiD provisions and in the company and support of his family and friends.

Joe is survived by his wife Noreen, his son Jeff and daughter Sheryl along with their partners Marissa and Andrew and Joe’s sister Dorothy.

The family would like to thank the staff at The Veterans Lodge at Broadmead in Victoria for making the past months a supportive transition to the end. Brain tissue will be donated to the Mayo Clinic to aid in continued research into PSP and its onset and treatment.

A Memorial Service took place on Tuesday, November 19 at 2:00 p.m. in the Sequoia Centre at McCall Gardens, 4665 Falaise Drive, Victoria BC.

In lieu of flowers, donations are gratefully accepted at the Heart and Stroke Foundation – HeartandStroke.ca, CurePSP.org or the Rideau Valley Conservation Foundation – rvca.ca (directed to support the Sandi Slater Memorial Trail).

Condolences may be offered to the family at the link below:

A shorter obituary has been published in the Victoria Times Colonist and online here :

Joe and his family hosted a farewell social Wednesday afternoon, 13 November, in a conservatory at the Veterans Memorial Broadmead Lodge where Joe had resided this past year. Robbie Preston, Mike Siska, Bill McKay, and Jim Bradbury joined members of the family who had traveled and come together for an agreeable visit with Joe, who displayed good spirits and appreciation for the company and conversation. He was especially pleased that Bill McKay (RMC 63) had flown in from Ottawa to visit with Joe and Noreen at this time. Bill’s friendship with Joe went back to their early school years. I conveyed to Joe the messages that had been sent me by RMC 64 classmates.

After an hour of light conversation which Joe fully engaged in although he had difficulty getting his remarks out clearly because of failing voice with the disease, Joe indicated that he was ready to return to his bed. When he was settled in bed we four guests went to Joe individually to bid him farewell then left him in company of his immediate family for the medical procedure.

The Celebration of Life for Joe at the wonderfully-appointed Sequoia Center was well-attended. The class of 64 attendees were myself, Willy Anderson, Merv Lougher-Goodey, Bob Stickley, and Al Robertson, who had traveled over from the mainland. Robbie Preston, Mike Siska, Ira Rote, and Mike Morres represented the class of  ’63. There also were a good number of ex cadets from earlier years, including Les East, Jim Butler, Gary Brown, and Dave Stocks (RMC 62), and other military civil engineers who shared monthly MILE luncheons with Joe.

Robbie Preston was the celebrant who led the service and delivered the eulogy. Mike Siska also spoke to the assemble about his experience with Joe at the college and Joe’s long and productive career with the federal government. Remarks centered on Joe’s  resolve, and focus in his decisions but Dave Stocks, a regular at the monthly VI ex Cadet luncheons and post meal banter, spoke about Joe’s apparent sense of humour and ready smile, which went from “ear to ear”. Although he couldn’t converse easily, Joe was always attentive to the conversation around him and would smile at amusing statements.

There was a slide presentation running continuously through the celebration that clearly evidenced a very active social life with family and friends and significant travel.

Joe’s son-in-law, Andrew, in conversation with me mentioned that Joe was a member of the family “Country Club”. To be a member in good standing one had to have visited the number of countries that corresponded with one’s age. Andrew advised that Joe at his passing was still a member in good standing. Undoubtedly the majority of those visits were work-related – especially with his four years employment with United Nations International Maritime Organization, which had him resident in London, U K.

From the conversations and presentation it is clear that Joe had a full life and that he lived it very well. 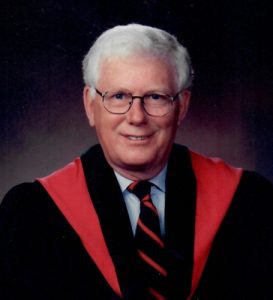 Loving spouse of Judith Gray, passed away peacefully at the Riverpath Retirement Community in Ottawa on November 18, 2019. Son of the late Harry and Elsie Tufts, Douglas Tufts of Madoc, Ontario, was born on December 8, 1932 and “took his final flight” in his 87th year.

Doug was a civil engineering graduate of Royal Military College (RMC) and had a long career in the Royal Canadian Air Force, serving in both Europe and Canada. Doug finished his career in Ottawa, working in the Public Service of Canada. Upon his retirement, Doug moved back to his roots on the family farm in Madoc where he enjoyed raising cattle.

Friends and family were received at the McConnell Funeral Home, Madoc, November 23rd, from 11 a.m. – 1 p.m., with a service taking place at 1 p.m. Interment followed at White Lake Cemetery, Madoc.

Donations made to the Alzheimer Society of Canada are appreciated. https://alzheimer.ca/en/Home