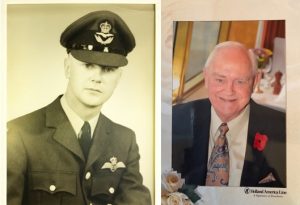 It is with great sadness that we announce the sudden passing of Major (Ret’d) Dale S. Northrup (RCAF).  Dale was born on January 2nd, 1937 and he passed away on November 16th, 2019 at the age of 82.  He is survived by his loving wife of 58 years, Marilyn (nee Muir), his son Glenn (Janice) and their daughters, Sarah and Erica of Winnipeg, MB; his daughter Heather and her sons, Tyler and Alex of Kanata, ON; and his nephew John Hyslop (Darla) of Slave Lake, AB.  Predeceased by his parents Lloyd and Lida Northrup, and his sister Doris Hyslop.

Dale was born in Riverside, NB and he grew up and attended school in the Moncton area.  He then attended Collège Militaire Royal (CMR) in Saint-Jean, QC.  Dale enjoyed a long and rewarding career (almost 39 years) as a pilot in the Royal Canadian Air Force flying several different types of aircraft, such as the Harvard Mk 4 trainer, CF-100 Canuck, CF-101 Voodoo, CF-104 Starfighter, CT-133 Silver Star, CT-114 Tutor, and the mighty C-130 Hercules.  During his first operational flying posting at 2 (F) Wing in France, Dale met and married Marilyn, the love of his life.  Together Dale and Marilyn enjoyed living in many interesting locations such as, Comox, BC; North Bay, ON; Colorado Springs, CO; Toronto, ON; Moose Jaw, SK; Ottawa, ON; and Belleville/Trenton, ON.  Dale retired from the RCAF in 1993, and he and Marilyn initially remained in Belleville, before moving to Kanata, ON in 2012 in order to be closer to their daughter Heather and her family.

Since retiring from the RCAF, Dale and Marilyn have been avid travellers, globetrotting around the world by ocean cruise ships, river boat cruises, guided bus tours, and simply travelling on their own.

Dale and Marilyn cherish the many friendships that they have made over the years, and they always looked forward to reconnecting with friends, old and new, whenever possible.

The family would like to thank the staff at the Ottawa Hospital Civic Campus for their outstanding care and support.

In lieu of flowers, donations may be made to the Heart and Stroke Foundation, or a charity of your choice.

A Celebration of Life event will occur at a later date.

An online memorial can be found on the website of the Capital Memorial Gardens (Ottawa), where there are additional photos, and an online guest book.

After a short illness, Brian passed away peacefully at North York General Hospital on Tuesday, November 19, 2019 at the age of 80. Predeceased by his wife Marnie (nee Young) who passed away in 1985, he will be lovingly remembered by his children, Heather and her son John, David (Krystyna) and daughters Margaret, Katherine and Victoria; and Michael (Kimberley) and son Alexander. A retired Colonel, Brian graduated from Royal Military College, served in the 4th Regiment Royal Canadian Horse Artillery, and subsequently in the 7th Toronto Regiment Royal Canadian Artillery Regiment. He had a distinguished career as an international affairs and defence analyst and media spokesperson. He was also a former teacher and was a great story-teller with a hearty laugh. Brian was a great inspiration to his family, friends and colleagues. Visitation will be held at York Funeral Centre (416) 221-3404, 160 Beecroft Road, North York on Friday, November 22nd from 5 p.m. – 9 p.m.. A visitation on Saturday, November 23rd at 1 p.m. was followed by the service at 2 p.m., and interment at York Cemetery. In lieu of flowers, please consider making a donation to the Alzheimer Society of Canada.

S/L MAS MacNamara died peacefully in Ottawa on his 80th birthday, an act of symmetry for which he would have been very pleased. Born and raised in Ottawa, Mark was both an Electrical Engineering graduate of the Royal Military College class of 1961 and of St. Michael’s College at the University of Toronto class of 1962. He was also a graduate of the US Naval Post Graduate School class of 1975 where he completed a master’s degree in Aeronautical Engineering with distinction. Mark served proudly for 37 years as an RCAF aerospace engineering officer in multiple locations across Canada, the United States, and Europe. As a warrior of the cold war, he retired in 1994 only after he was confident of the capitulation of the Soviet empire. Fondly remembered for his innumerable adventures and especially those in his trademark WW2 Jeep; he proved twice that an officer’s mess lower lounge could indeed function as a garage. His encyclopedic memory and knowledge was only surpassed by his extraordinary skills in fixing anything electrical or mechanical, which he put to good use in retirement in his basement precision machining and auto repair shop. Mark was an enthusiastic supporter of the Royal Canadian Legion, 410 Wing and was founding member of the ‘Knights of the Round Table,’ an association of comrades of which he was proud member right until the end. Predeceased by his parents Francis and Lois (nee Colquhoun), Mark is survived by his beloved wife of 52 years, Margaret (nee Stalker); his brother Sean (Gail) MacNamara and sister Frances Long; his daughter Caitlin (Paul Hooper) MacNamara and son Patrick (Shawna) MacNamara, and his grandchildren Madeleine, Kenna, Covey, William, Elliott and Frances, and niece Anne Marie (Colin Hogan) Long, nephew Patrick (Laura) Long, and cousin Ian (Amie) Colquhoun, as well as a great many friends from around the world with whom he had forged lifelong friendships. The family acknowledges with gratitude the caring staff at Beacon Heights Retirement Residence and the medical team at the Montfort Hospital. A ceremony with military honours will be held on 12 December 2019 commencing at 1100hrs in the Hall of Colours at Beechwood National Memorial Centre, 280 Beechwood Avenue, Ottawa, followed by a memorial service in the Sacred Space at 1145hrs, and interment at the National Military Cemetery of the Canadian Forces at 1300hrs. A reception will follow. In lieu of flowers, please consider a donation to the Alzheimer’s Society of Canada. May all your skies be CAVU and all your runways clear and may all your fuses arm as intended. 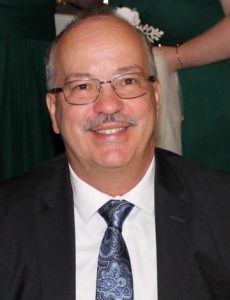 Suddenly in Atlanta Georgia on Friday November 22, 2019 at the age of 56. Predeceased by his parents Janice (née Patterson) and Gordon Black and brother Owen Black. Proud and loving father to Leah (Eric Long) & Victoria. Dear brother to Shelley (Roberto), Mark (Kelly), Kevin (Robyn), Mimi, Martha (Bart Haberbosch) and Michael. Cherished uncle to many nieces and nephews. Will be dearly remembered by his colleagues at DND and many friends.

Matt loved planes, baked spaghetti and his two girls. He liked to build airplanes and fly them at millennium field with his friends, go to broadway for breakfast and dinner and loved his job very much.

Friends were invited to visit the Hall of Colours of the Beechwood National Memorial Centre, 280 Beechwood Ave. on Friday December 6th from 2 to 4 and 6 to 9 p.m. and again on Saturday December 7th after 12:30 until time of service. Memorial Service was held in the Sacred Space at 2 p.m. followed by interment of urn at the National Military Cemetery of the Canadian Forces.

In Memoriam donations to the Heart & Stroke Foundation would be appreciated. 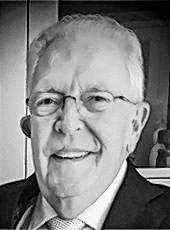 Age 88, died Wednesday, December 4, 2019, in North-wood’s Ivany Place in Bedford. Russ is survived by his wife, Liz; and children, Dave (Deb), Larry, Barb (Andrew), and Andy (Jacqui). He also leaves behind grandchildren, Lauren, Emma, Jonathan, Ryan, Jacob, Samantha, Wesley, Sabrina, Alexa, Norah, Gabby. Russ was preceded in death by his parents, Helen and Stan; and also his brother, Murray (Barb) who passed away in early September this year. Russ was born in Regina, Sask., in 1931. His long naval career began at the age of 19, when he enrolled in the Naval Reserve at the Royal Road Military College, and then two years later transferred to the Regular Force. After completing training at the Royal Naval College in England, he was posted to HMCS Micmac with a promotion to Lieutenant in 1956. After serving as Flag Lieutenant to the Flag Officer Atlantic Coast, he was selected for exchange duties with the Royal Navy, and promoted to the rank of Lieutenant Commander in 1963. He served as Executive Officer of HMCS Assiniboine between 1968 and 1970. In 1974 he was promoted to the rank of Commander, and in 1977 was transferred to the Supreme Allied Commander in Norfolk. He returned to Halifax in 1981 and retired from the Regular Force. He returned to active duty in 1982 to act as planning coordinator for the 75th Anniversary of the Naval Service of Canada, and on completion in 1985 he retired for the second time. Russ was an active member of his church, fulfilling many roles of the parish guild over the years. He was also very dedicated to the Canadian Naval Memorial Trust, and the preservation of HMCS Sackville. A service will be held in St. Augustine’s Anglican Church (290 Purcell’s Cove Rd.) on Thursday, December 12th at 11 a.m., followed by a reception. In lieu of flowers, donations may be made to the Canadian Naval Memorial Trust. (https://hmcssackville.ca/)