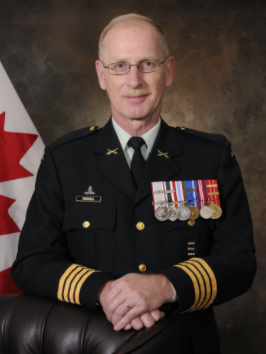 It is with great sorrow we announce that on Tuesday the 13th of October Colonel (Ret’d) Christopher Guy Simonds CD, aged 62, of Ottawa Ontario passed away in hospital following a very complex medical journey which began in July. Christopher’s four boys were able to visit with him prior to his passing. With his wife at his side, Christopher slipped away peacefully with love and the words of his boys in his ears.

Christopher’s life was one of dedicated service to the military, his family, and to his dear friends and colleagues. While his work often took him away from those he loved, when he could, Christopher enjoyed golfing and curling, watching the Blue Jays, and travelling the world with his family. Over the course of his life, Christopher received many honours and awards for his contributions to both the military and civilian communities he served. He lived his life guided by the values of duty, loyalty, honour, and valour; he will be missed for his outstanding leadership, strategic vision, and wonderful sense of humour.

Given the unexpected and devastating nature of the medical challenges Christopher faced, being with family at home whenever possible was immensely important throughout his period of care. This journey, while difficult, nevertheless proved to be tremendously unifying and he and his family were grateful for each precious moment they had together. Christopher never faltered in his determination to optimize every opportunity to extend life and spend time with those he loved. He remained optimistic to the very end. The family wishes to extend their gratitude to the First Responders and the Community Support Services that made this possible, in particular: the firefighters at Fire Station 51 in Ottawa, the Ottawa Paramedic Services, the University of Ottawa Heart Institute and the larger Ottawa Hospitals Network Oncology Services, the Champlain Local Health Integration Network, and Carefor Ottawa.

A funeral will be held at James Reid Funeral Home in Kingston, Ontario on Thursday 29 October at 1 p.m (with RSVP’s required for attendance as spaces are limited, to RSVP please call the funeral home between 9 a.m. and 1 p.m. Monday – Wednesday or by signing up below). Burial will follow at the Cataraqui Cemetery in Kingston, Ontario. The funeral will allow for both physical attendance (with masks, social distancing and contact tracing measures), as well as a live streaming digital component to enable those unable to attend in person due to COVID, to participate. Please register for the live stream using the following link: 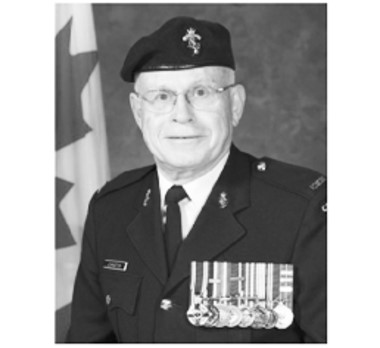 Murray died peacefully at the Queensway Carleton Hospital at the age of 87.

Murray leaves behind his beloved wife Joan (Aitchison) of 63 years. He will be lovingly remembered by his daughters Janice Tarling (Kent Tarling) and Jenny Janes and his grandchildren Pte. Jamie Tarling, Kameron Tarling, Kaitlin Janes and Grace Janes. Dear son of the late Edgar and Annie Johnston and brother of the late Palmer Johnston, he is survived by his brother Dr. Laurence Johnston in Vancouver. Murray will be remembered by his sister-in-law Mary Johnston and nieces and nephews: Catherine, Gordon, Ross, Mandy, Megan, Sara and their families.

Murray served as a Regular Force Officer, RCEME for 31 years, followed by work at the Department of Energy, Mines and Resources as Canadian Representative to the NATO Petroleum Planning Committee. He was then appointed EME Colonel Commandant in 1991 until 2004. His volunteer work included: RMC Club President, Vice-Chairman of the Conference of the Defense Associations, EME Association President, Vice-Chair of the Friends of the Canadian War Museum, member of the Board of Directors of the Perley Hospital Corporation. He wrote and published two books on the history of RCEME and developed the Branch’s Honour Roll. Amongst his awards/medals Murray received the NATO SFOR medal, the Governor General Meritorious Service Medal in the military division and most recently the Order of St. George.

In his much deserved retirement years Murray loved to travel the world with Joan, garden and spend time with family and friends. We wish you peace Dad and know that you are loved!

Donations can be made in his memory to the Canadian War Museum, Ottawa, Ontario or the RCEME Corps Museum, Kingston, Ontario.

Due to Covid-19 restrictions visitor entry to the funeral will be strictly limited. If you wish to view the service by means of livestream, please visit www.beechwoodottawa.ca for more information.

Murray’s legacy is remarkable and unparalleled. He leaves a substantial vacuum for his leadership and dedication to the Corps were notable and celebrated.
Indeed, it can be said that Murray personified all that the Corps exemplifies and indelibly put RCEME on the map!
His book CANADA’S CRAFTSMEN AT 50! and plethora of publications served both to preserve the Corps’ proud history and heritage and to articulate the Corps achievements.
Murray’s strong sense of family, both in his personal life and that in the Corps, was ever conspicuous and defined him as an officer and a gentleman extraordinaire as did his humility and humanity.
With the craftsmen and women, all of whom he valued and respected immensely, he enjoyed an affectionate and avuncular relationship, their Uncle Murray.
He was, and will continue to be, an inspiration to all and will be sorely missed.

Camille graduated from the Royal Military College, Saint-Jean, QC and the Royal Military College in Kingston and enjoyed 29 years with the Canadian Armed Forces. He served overseas with the 4 Canadian Brigade Group, NATO, with the Anti-Tank Company in Germany, with the International Control Commission in Vietnam and with the United Nation Forces in Cyprus. Cam was proud to have commanded the Trials and Evaluation Section of the Canadian Airborne Regiment in Rivers, Manitoba, the 3rd Battalion Royal 22e Regiment in Valcartier, QC and the Canadian Forces Recruit School in Saint-Jean. He attended the Canadian Army Staff College and later was a Directing Staff (DS) at the Canadian Armed Forces Command and Staff College in Kingston. At the end of his career, he was the Executive Director to the Chief of Reserves. Camille truly valued the long-lasting friendships made during his military career which have endured to this day. He loved to learn and, later in his career, obtained an MPA from the University of Quebec and an MBA from the University of Ottawa.

After retiring from the Canadian Armed Forces, he worked for Canada Post Corporation for 15 years as Manager of Fraud Investigations in the Internal Audit Department. Cam was an active sports enthusiast; he played hockey (goaltender), soccer, tennis and was a skydiver (D-150) with over 600 jumps. Upon retiring from Canada Post he bought his Harley-Davidson and he and Gwen travelled to motorcycle rallies across Canada and into the USA.

A very special thanks to Dr. E. Daigneault, Cam’s family doctor, Dr. H. Alsaffar, his ENT Surgeon, Dr. J. Hilton, his Oncologist, and all staff at the Cancer Centre and Ottawa Hospital for their compassion and care during Cam’s illness. In keeping with Cam’s wishes, a private graveside service will take place at the National Military Cemetery at Beechwood Cemetery. In memory of Camille, please consider a donation to the Support our Troops Fund or the Canadian Cancer Society.