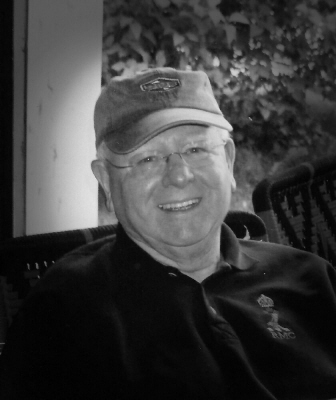 He has come to the end of his journey. Jim passed away on November 1, 2021 surrounded by his family. Jim has bravely managed his journey with cancer and is now at peace.

He is predeceased by his mother Lena, sister Anabelle, first wife Brenda, son in law Alan (Kerry) and his youngest daughter Kimberley. Remembering him are his loving wife Gail, sister Evelyn, daughters Sharon (David) and Kerry, step children Graham (Brandi), Ben and Lorie and his grandchildren Emma, AJ and Liam, who all miss him dearly.

Jim left his home in Drumheller, Alberta at an early age to attend two years at Royal Roads Military College, in Victoria, followed by another two years at Royal Military College, Kingston. Somewhere along the way he acquired the nickname “Fats” and it stuck with him. While in Kingston, met the mother of his three children and, upon graduation, became a Naval Officer. Many of his early years in the Navy were spent at sea but he managed to get his PhD in engineering between deployments. He notably led the creation of SHINPADS an integrated command and control system that the Canadian Navy still uses today, and which has been adopted/copied by other navies around the world.

After many years in the Navy and several moves from Dartmouth to Ottawa and Toronto, Jim left the Navy in the rank of Captain (N) to work in the private sector. He started working with Norpak Corporation and eventually became CEO and President. During his time at Norpak many new technological advances related to closed captioning and VCR+ were developed.

Jim retired from Norpak in the early 2000s but that did not stop his work. He worked with the RMC Foundation and eventually became its President. He was an active alumnus and was instrumental in the class of ’65 becoming, as he would say, “the best class at RMC”. He has sponsored several students at RMC and has been a strong supporter of the rowing club. He always had the Navy in his heart and became the president of the Naval Association of Canada so he could continue his work in advancing the Canadian Navy. One of his proudest achievements was the annual Battle of the Atlantic Gala, which commemorated the important role the Canadian Navy played in WWII.

Summers were Jim’s favorite time. This was the time for parties at the beach and having friends over to enjoy the weather. There was always boating and tubing. These summer events included friends from Norpak, the Naval Association of Canada, RMC Foundation, Class of ’65 from RMC and CMR, his great neighbours, and with extended family and friends. The summer highlights were the annual July 1st parties at the Carruthers Recreation Complex, Christmas in July with the Wilson’s, countless birthday and holiday celebrations with sleepovers, waffles and Euchre games. Fishing was always a big part of Jim’s life and he loved hanging out with the guys either in BC or Quebec when the fish were biting or with his family on Fishing Fridays. He really enjoyed teaching kids of all ages life lessons like how to fix things, how to sit and eat properly at the dining room table and how to be a good, responsible person.

Jim’s wish was to have a party to celebrate his life, so we will honour that wish with a function in the summer and everyone is “instructed to have a good time”. In lieu of flowers, please consider making a donation to the Salvation Army, Canadian Cancer Society or to the Ottawa Hospital Foundation.