Looking for excitement and adventure late on the evening of Monday July 15th the Commandant’s famous beagle, Barney, escaped through the back door of the cottage and went renegade through the campus of the Royal Military College of Canada. To prevent the pup from being abducted and submitted to various tortures by the smelly young sea cadets currently occupying the campus, 12192 Brigadier General Tom Lawson was sent into the night to retrieve him. Upon his return, beagle in hand, General Lawson was surprised to find a section of ninja-like gentlemen cadets stealthily installing a sailboat with a Jolly Roger upon it’s mast into his driveway. Little did he know what the next day would have in store.

In his first address to the cadets of RMC, General Lawson demonstrated his superior skills in oration while encouraging the Cadet Wing to participate in “Skylarks”, pranks around the College meant to improve morale and participation in Wing activities. With the impending Change of Command parade, some of the senior cadets decided it would be worthwhile to give the General a memorable send off with a coordinated series of Skylarks in honour of his time at RMC.

A week earlier, a crafty group of cadets doning scuba gear floated and anchored a section of modular tentage into the middle of Deadman’s bay with words of thanks for the outgoing Commandant. As the sun crested over the Stone Frigate on the morning of Tuesday the 16th, the late-night activities of the young officer cadets became apparent accross the College grounds. For starters, the Commandant’s white SUV had gone missing and was now located on the inner field and covered in red “BON VOYAGE FROM RMC” vinyl decals. The members of the Mil Wing immediately saw the brilliance of this parking job, raising some interesting questions: “Instead of converting the parade square into a parking lot, might the inner field not do just as nicely?” 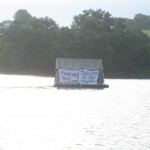 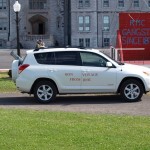 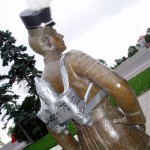 Across from the vehicle, the heavy 15ft Sandhurst Wall had been wheeled to the middle of the parade square and painted with interesting messages such as “RMC GANGSTA SINCE 1876”, referring of course to the early gangster rap music of “Snoop Doggy” Denison and his Funky 17. A very ambitious group of cadets managed to install a banner on the roof of the Old Hospital amid an onslaught of high winds and patrols by the Commissionaires. Brucie went through many costume iterations that day, starting as a pirate and later as “Rocketeer Lawson” complete with and ultramodern jetpack. To cap it all off, the following poetically written ransom note was delivered to the General’s house very early in the morning:

And so, at exactly noon on Tuesday the 16th, the Commandant was met at the gazebo in front of Fort Champlain by a handful of cadets and a hooded figure in a well made suit. In exchange for a day of relaxed dress in class, the cadets released their hostage, who was extremely helpful and a fantastic sport throughout the entire operation. S125 Bill Oliver, the master prankster and publisher of e-Veritas himself, was released from his bounds and Brigadier General Lawson was then presented with a plaque commemorating the day of Skylarks as well as a special thanks for his leadership and involvement on behalf of the cadets.

We wish the General the best in his new post, and hope that his peers at NDHQ in Ottawa will not be thrown off when they enter his office and see a wall-mounted rubber chicken. 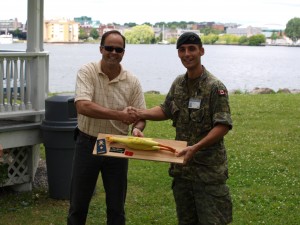 Commandant has the last word!

Following a barrage of inventive RMC officer-cadet skylarks that included a floating tent in Navy Bay, a sailboat in the Commandant’s driveway, a stolen vehicle stenciled with farewell messages, a costume for Bruce, and a hostage-taking with Mr Bill Oliver, I offer a day of civilian dress to the cadets now present in exchange for a halt to further audacities. Enjoy relaxed-dress Thursday, cadets, and thank you for the kind messages.