Lockhart Gordon Creek in British Columbia was named after 495 Captain Maitland Lockhart Gordon (RMC 1899), who was killed in action 7 May 1917 at Bullecourt. He was educated at the Royal Military College, Kingston, from which he graduated in 1902.

As part of the Royal Military College, Duntroon’s centenary celebrations it is timely to consider how the Australian College was founded on 27 June 1911 by an ex-RMC cadet.

25 Cadet William Throsby Bridges (RMC 1877-9) was born February 18, 1861 in Greenock, Scotland. He was one of the recruits who had entered RMC Kingston late in the second term on 10 April 1877. Although he was a good student, he became unsettled and began failing his courses when his family migrated to Australia leaving him in Kingston. Commandant Hewett asked his father to withdraw his son. This ex-cadet was the first RMC dropout.

In 1890, the Governor General, the Marquis of Lorne spoke of the success of RMC graduates in the British Army and said that a similar college was needed in Australia. At the request of Queensland 6 copies of the RMC regulations and the instruction syllabus were sent to Brisbane. In 1902, MGen E.T.H. Hutton proposed the RMC, Kingston system by which officers were trained for the reserve as well as for all arms of a regular force for Australia.

In 1909-10 Colonel William Throsby Bridges reported to the Australian Minister of Defence that on his way home to establish the Australian Military College, he had inspected his alma mater the Royal Military College of Canada. According Bridges’ diary in RMC’s Massey Library, he felt that the RMC Kingston system trained officers without getting full use of their services after graduation, since officers were trained for the reserve as well as for all arms of the regular force. With the international scene getting darker, he copied the West Point system, by which only regular army officers were trained via a four-year course training for all arms.

Lieutenant-General Sir William Throsby Bridges, KCB CMG served as founder and first commandant of the Royal Military College, Duntroon (1910-14). He served as commander of the Australian Imperial Forces in 1914. He was the first Kingston ex-cadet to command a division in the field. He was killed at Gallipoli on 18 May 1915. He is commemorated on the Canadian Virtual War Memorial and on page 566 of the Canadian First World War Book of Remembrance. His name is listed on the RMC memorial arch. He is remembered in a Memorial at Mt Pleasant Lookout Royal Military College, Duntroon. 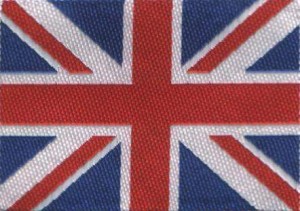 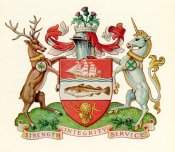 The Grant of Arms to the Royal Military College of Canada was a favour by H.M. King George V to the College. The achievement was `ensigned` indicating that a device was placed above all other heraldic devices pertaining to an achievement. For the RMC Arms to be ensigned by the Imperial Crown is a rare honour. That the College arms are special is evidenced by the `Inescutcheon charged by the Union Badge`, in other words a Union Badge was placed upon a a small shield-shaped charge in the centre of a shield.

1. When it appears on the Arms of the Royal Military College of Canada, it is merely called the Union Badge. On other occasions, it is known as_______

e) All of the above. When it appears on the Arms of the Royal Military College of Canada, it is merely called `the Union Badge. The Union Jack is officially known as the Union Flag or the flag of the Great Union. When it appears as an augmentation, for example on the Arms of the Dukes of Wellington, it is referred to as `the Union Badge of the United Kingdom“. Source: Lt Cdr Alan Beddoe `Beddoe`s Canadian Heraldry.` Mika Publishing Company, Belleville ON, 1981

2. Lt Cdr Alan Beddoe wrote that `Strength, Integrity, Service`, the motto of ____, reminds one of `Truth Duty Valour`, the motto of the Royal Military College of Canada:

A) The Bank of Nova Scotia

B) The Bank of Montreal

A) Lt Cdr Alan Beddoe wrote that The Bank of Nova Scotia`s motto, `Strength, Integrity, Service`, reminds one of `Truth Duty Valour`, which is the motto of the Royal Military College of Canada.

Did You Know Researched by: E3161 Victoria Edwards