‘Means of engaging this large unemployed shadow army with some form of employment that could use the skills and abilities of these ex-soldiers was a great necessity. To move Western Europe forward on a track to orderly recovery from a horrific and destructive war of some 6 years these young men needed to be engaged.’ 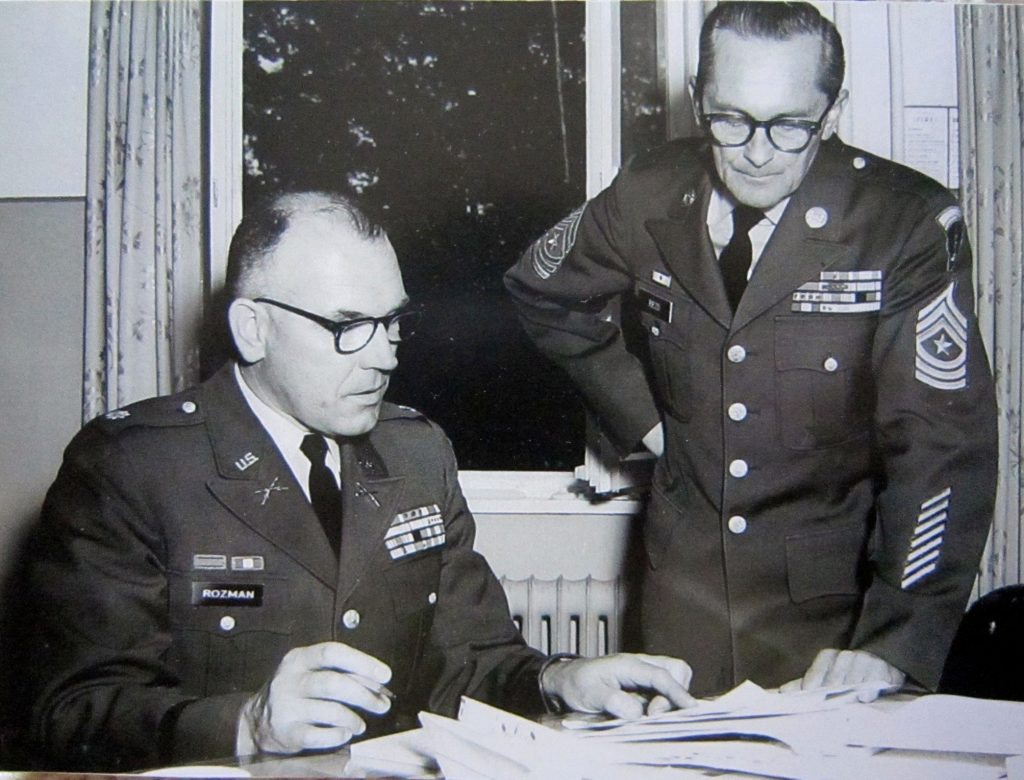 Disestablishing the Labor Service—Then Bringing the Service Back

The Army was confronting a period of reduced budgets.  Major commands were exploring every means of bringing down operating costs to fit within these reduced budgets.  A staff officer at U. S. Army Europe (USAREUR) had performed a study and recommended that a significant savings could be achieved by eliminating the Labor Service organization.

The Labor Service was a paramilitary organization established by the U. S. Government shortly after World War II in Europe to meet several needs.  One had to do with a large unemployed soldiery that was concentrated in Western Europe after the war.  Not only were the soldiers nationals of the countries where U. S. Forces were garrisoned in their occupation and later North Atlantic Treaty Organization (NATO) roles, they were also soldiers from countries that now were behind what was referred to as the “Iron Curtain,” soldiers of these countries who for political reasons and fear for their lives could not return to their homelands.

Means of engaging this large unemployed shadow army with some form of employment that could use the skills and abilities of these ex-soldiers was a great necessity.  To move Western Europe forward on a track to orderly recovery from a horrific and destructive war of some 6 years these young men needed to be engaged.

As well, the force reductions after the war had been so precipitous and extensive, that sufficient forces to secure Western Europe, especially against emerging Soviet pretensions in Europe were proving a challenge.  Forces already in place and reinforcing troops sent in the early 1950s found that there were major requirements for long haul drivers to move supplies from ports to garrisons deeper into Europe, for depot maintenance capabilities with sufficient mechanics to maintain rolling stock and equipment, and where  needed, security guards for everything from ammunition depots to allied army dependent school yards.

The units in place were finding that they had to make large diversions of troops to these functions.  These diversions were increasingly affecting mission capability.  A solution needed to be found.

Though there were other reasons, the above two stated rationales were major justifications for the formation of the Labor Service.  The organization was organized on military lines into companies and battalions and higher formation headquarters.  The units were billeted in barracks.

The companies and battalions were generally organized by nationality, for example, Albanian, Bulgarian, Czech, Hungarian, and Polish units. The Labor Service troops in the early 1950s wore the same service and utility uniforms as the U. S. troops, the olive colored wool service uniforms being died black and the helmet liners worn when on armed duty painted light blue with a white band painted around the center of the liner.  Labor Servicemen were assigned military rank in a parallel system to U. S. Army ranks.  Over the years there would be some changes such as the wool uniforms remaining in the same “Ike Jacket” design but changing color from black to a sort of cadet gray.

Within a fairly short time guard, long haul trucking, and depot maintenance units formed throughout the U. S. Zone.  They became an integral part of the U. S. Zone fabric.  Many Army dependent children of the 1950s can recall armed Labor Service guards in their black uniforms and light blue helmet liners patrolling the school grounds.

Over time, many of the labor servicemen immigrated to Canada and the United States or integrated into the French and German economies.  But the social mission of the Labor Service would remain well into the 1980s as it provided a continuing transition  employment for men escaping from countries behind the iron curtain.  This function had also served for many World War II soldiers who returned to Europe after service in the French Foreign Legion—thousands, especially Germans who had no job prospects immediately after the war, were recruited by the Legion as France ramped up its operations in French Indochina.

After the French defeat at Dien Bien Phu in 1954 and subsequent French withdrawal from that region, large numbers of these legionnaires began returning to Europe on release from French service.  This process was an extended one.  Many transitioned to the Labor Service, at least initially, though some remained with the Labor Service for long careers.  It was not uncommon to tour a Labor Service company barracks even in the middle late 1960s and note the area of an ex-legionnaire.

Now, some 14 years after formation of the service, a staff officer was suggesting disestablishing the service to help meet developing fiscal constraint.  Budget pressures were such that the command determined to move forward on the proposal.

The commander of one of the major service center headquarters, a USAREUR unit in the Kaiserslautern area, with 3,000 men serving in guard, long haul and depot maintenance units under its authority, received the direction to start the process of deactivating the labor service units controlled by the center.  Minimum financing to support transition would be available.

The above said, to do the transition properly the loyal officers and men of the Labor Service for their long years of dedication to mission deserved the best transition possible.  That is how the center headquarters commander chose to approach the task.  In his mind no stone would be left unturned engaging the German community in the area to find jobs and positions for the officers and men of the labor Service units controlled by the center.  He would do the right thing and obtain employment in the economy for every Labor Service man.

The service center headquarters commander had been in his role for two years before the initiative to deactivate the units of the command developed.  He had formed unique bonds of respect and admiration with the officers and men of the service.  These were reciprocated.  The commander’s dedication to the transition work was as a comrade in arms to fellow comrades of long standing.  The labor service men appreciated this dedication very much.  Remarkably, throughout the process, the men still in service loyally and with dedication performed their missions.

As the end of the demobilization year approached, the strength of the command was down to some 500 remaining. The transition was proving quite successful.

Then a sudden change of policy occurred.  Despite the budget situation, the loss of thousands of guards, drivers and mechanics was having a large and increasingly severe negative impact on 7th Army units.  Large numbers of troops were having to be diverted from mission to the functions previously performed by the labor Service men.  Or expensive contracts were becoming necessary with private vendors.

The situation was exacerbated by the situation that developed with the de Gaulle Government in France resulting in all U. S. support units in France being pushed into Germany.  As the situation approached critical mass, the service center headquarters commander received a peremptory order to cease transition and begin immediately to reconstitute the Labor Service units.  This mission began immediately.

Within some six months, the force had been restored to almost 1,500 labor service men.  Another mission success under difficult circumstances had been achieved.

As a leadership situation several observations may be made from this case.   The service center headquarters leader had apparently established a rapport and sense of mutual respect and regard with the officers and men of the Labor Service under command.  They trusted him and he knew their capabilities and had learned who they were as people.  From this basis the ability to perform very well two contradictory missions at once is apparent–the demobilization/transition mission and the ongoing mission.  Despite what one would expect in terms of the impact on morale and the difficulty in locating employment on so sudden and tight a schedule, both missions went forward with great success.

Even more remarkably, when another sudden mission change developed, a virtual 180 degree change in direction to reconstitute units as quickly as possible and reassume missions, the change was addressed quickly.  The mission was accomplished with equal alacrity and effectiveness.

The leader was apparently competent in the event.  Again, he had established highly effective relationships, networks and mutual respect with the officers and men of the labor Service units.  He had conveyed in action and deed that the welfare of the men was a top priority.  These men reciprocated fully making the rapid change in direction with success possible.

What was the basis of the center commander’s skill set as a leader that informed such success? One answer, he was an infantry officer who had served as an enlisted man to senior non-commissioned rank in the infantry for over 5 years, most of that time in a combat theater that involved multiple actions.  He had been directly commissioned.  He had commanded five company size units and served on battalion, regimental and higher army staffs for 16 years prior to this assignment.  In that time he had also been assigned to work with reserve formations and a foreign army.  As well, his heritage was that of many of the labor service men.  He was a uniquely well suited commander for these units and the situation that developed.  But others with similar backgrounds have been confronted by as difficult a situation and not been able to pull it off.  Why?

This leader chose to learn the people and give them unstinting respect, loyalty and support while demanding of them adherence to mission.  Every man understood and responded with dedication and high performance.  It’s a leader style that has been with us for a very long time—but it works.