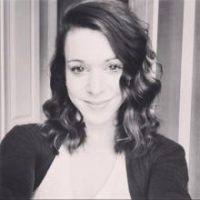 It may come as a surprise to some, but not every professor in RMC’s history department is an ex-Cadet. Dr. Marie-Michele Doucet, for example, admits she didn’t know much about the College before coming here in 2016. “Many of my colleagues at the History department are RMC graduates and have been involved with this institution for many years,” she said, “but that is not the case for me. I am not from a military family and have no military background so I can’t say that I knew a lot about RMC before I got my position here.” She added, “But since I’ve been at the College I have done my best to learn about the institution, about its students and everyday life at RMC. My students could certainly attest to that: they have always been more than happy to answer all the questions I have about the Canadian Forces and military life. They have taught me as much as I have taught them I think, and I am very grateful for that!”

Dr. Doucet has certainly been busy in her time at RMC so far. She teaches several courses, focusing mainly on European history but also on topics like Genocides in the 20th Century and Women and War. “On top of teaching,” she said, “I am also very involved in academic activities at the College. Just to name a few: I am one of the organizers of the Battlefield Tour, which has become a staple at the College over the years. I am also one of the organizers for next year’s Annual History Symposium, which will focus on the 1919 Peace Conferences. It certainly never gets boring!”

Her passion for what she does is something she comes by naturally. As the New Brunswick native explained, “Being a francophone New-Brunswicker, an Acadian to be exact, is a big part of who I am although I have not lived there for the past 10 years.” As she went on, “I think I always knew I wanted to become a professor. I think that if you ask my mom, she would tell you that this has been a goal of mine for much of my life. My father was a law professor for 33 years at the Université de Moncton. He actually retired the same year I got my position here at RMC. Seeing how passionate he was about his job has probably been a big influence to me. I would also add that throughout my studies, I’ve had professors who’ve truly inspired me. They were more than teachers to me, they were mentors, and some of them still are. In many ways, they are the reason why I am where I am today.”

Dr. Doucet earned her undergraduate and master’s degree at the Université de Moncton and completed her PhD at the Université de Montréal in 2016. Perhaps not unsurprisingly, her research focuses on the place and role of women during and after the First World War in France, “paying particular attention to the way they express their opinion on national and international issues, such as world peace, disarmament and reconciliation between France and Germany.”

As for her thoughts on RMC, she said, “I think the biggest difference for me is the proximity with the students. RMC is a small institution and that is its strength in my opinion. When you have classes of 5 or 6 students, you get to know them on a different level. Unlike many bigger universities the students are not just numbers,” she explained. “I actually make a point in knowing all their names and getting to know a little bit about who they are as persons not just as students. The relationship we have with them is very different. I feel that my teaching is more focused, more personalized if I can say. I don’t think this would be possible elsewhere and this is what makes RMC unique to me.”

This intimacy with her students also informs how Dr. Doucet teaches in her classroom. As she described it, “I don’t know that I have a teaching philosophy per say. My approach is very much focused on discussions. I want to teach my students about history of course, but first and foremost, I want them to learn how to think and how to form strong arguments; and that is why I highly encourage discussions in my classes.” 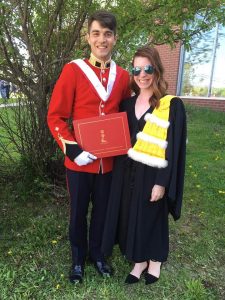 The connections such attachment breeds with her students come across in other ways as well. “Last year,” she recalled, “I saw my first group of students graduate and although it came with lots of mixed emotions for me, I could feel how exciting this moment was for them. For different reasons, I’ve never attended any of my own graduations; life always got in the way. So it was a great moment for me to be at their graduation and convocation last spring.”

So what does she do when she’s not teaching or otherwise involved with the College? “Like my other colleagues I kept very busy last summer,” she said. “Not only did I start a new position as Francophone editor for the Intersections journal at the Canadian Historical Association, but I also worked on a number of publications, some of which should be published this year. Summer is also the time to get ahead on my personal research. In August I travelled to London and Paris to do some research on my new project which focuses on the women’s international disarmament petition of 1930-32.  And, of course, being a new professor, a great part of my summer was also spent planning my classes for this year. Who said being an historian was not fun?”

Dr. B Asks, "What are you reading?" - The current CWC replies