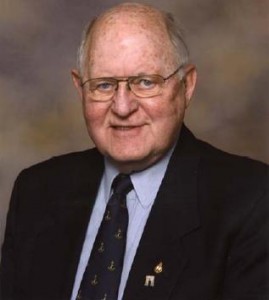 e-veritas: What extracurricular activities were you involved with at Military College?

Glenn Allen: I attended RRMC and RMC. My main extracurricular activities at Military College were athletic. I played on the varsity rugby team at Royal Roads. I was a member of the varsity football team at RMC. In previous years, engineering students completed a year at a civilian university. I graduated with a Bachelor of Engineering in 1962 as part of the first class of Engineering Graduates at RMC. The academic load was increased in third and fourth year to accommodate all of the credits required for a bachelor of engineering; I recall writing sixteen three hour exams in 10 days. At the time, civil engineering students had a choice of writing a thesis on soils or structures; mine considered structural concrete. Over the summer, I attended infantry summer training phases 1, 2, and 3. I served as the Cadet Wing Commander at the Royal Military College of Canada from 1961-62. After graduating on the 2nd June, I joined my regiment on the 4th June, 1962 and was part of the Divisional Concentration in Gagetown NB.

Glenn Allen: I served in Canada and Germany with the first Battalion of the Royal Canadian Regiment. I was the Assistant Army Staff Officer at RMC in1965 and 1966. I attended the Technical Staff Officers Course at the Royal Military College of Science at Shrivenham England in 1967. I then was posted to LETE, the Army test facility in Ottawa. After leaving the Army, I was involved in the start up and operations of several engineering companies that did extensive engineering development and manufacturing work in support of the Armed Forces and the Department of National Defence.

e-veritas: E-veritas recently ran a number of Remembrance Day poems written by Officer Cadets for their fallen comrades in a first-year English for science and engineering students class.

Glenn Allen: My son, 20704 Captain Michael Allen (RMC 1987) died on duty in the Hercules aircraft accident in Wainwright AB in 1993. Michael’s wife was Col Frances Jennifer (nee Home) Allen, who serves as the Commander of CFIOG. At the Canadian Military Colleges, the College community traditionally gathers to remember their fallen comrades, whether faculty, staff, alumni and students. I read the memorial poems in the electronic newsletter e-Veritas and look forward to reading more of the poems in the next edition of Veritas. http://www.veterans.gc.ca/eng/collections/virtualmem/Detail/80001841

e-veritas: You served as vice-president of the RMC Club during the Royal Military College’s centennial celebrations in 1976 and President in 1977. What are you most proud of?

Glenn Allen: The Club’s mandate was building and maintaining the momentum of a very active celebration of the 100th anniversary of the Royal Military College. We met often as a board and benefitted from a very good working relationship with the Commandants, 2816 BGen (Ret’d) William Turner (RMC1940) and H4860 General (Ret’d) John de Chastelain (RMC 1960), who remains the honourary vice patron of the RMC Club. In 1976, we relied on snail mail and the telephone to communicate with points of contact since we didn’t have e-mail, websites, or veritas. Liaison to the branches is always important, but it was more so during the centennial year and the following year. Since I owned my own engineering business, I had occasion to travel across Canada and was able to attend branch dinners as often as possible. Post-centennial, the RMC Club had to deal with a tired volunteer base. I am most proud that the RMC Club was able to maintain the interest of the membership and to expand after the centennial.

e-veritas: The RMC Club fundraised and offered a helping hand on a number of College projects to commemorate the 100th anniversary of the founding of RMC.

• City of Kingston bestowed on RMC the Freedom of the City privilege on the occasion of its centenary to march through the city with bayonets fixed, colours flying and drums beating.

• The stone pillar located near AMS, former Cadet Mess & Recreation Centre, was presented by the Class of 1976

Glenn Allen: Generally, the biggest challenges during my tenure as president were engagement of graduates, membership services and the role of the club. A key change to the constitution during my tenure was the decision by the RMC Club to offer full membership in the Club to those who had attended other Military Colleges in Canada. The Club acquired full members with numbers such as RNCC43 Commander A.C. Wurtele (Class of 1913 Royal Naval College of Canada); RCNC280 Don Currie (Class of 1946 Royal Canadian Naval College); RCNSE100 VAdm D.S. Boyle (RCN Special Entry); and RCNVR3 Commander James Coulter (RCN Volunteer Reserve at Royal Roads). Previously, those who had attended other Colleges in Canada were only eligible for associate memberships, and were not allowed to run for leadership positions in the Club.

e-veritas: Was the integration of lady cadets on the radar, when you served on the Minister of National Defence Advisory Committee for Canadian Services Colleges ?

Glenn Allen: Yes. When I served on the MND’s Advisory Committee from 1978-82, the key planning issue were

e-veritas: You recently served on the Board of Directors of the RMC Club Foundation; Any tips?

• The Foundation honours the wishes of donors of unrestricted donations by considering, prioritizing and filling as able the College needs lists identified by the Commandants of Royal Military College St. Jean and Royal Military College of Canada in their annual planning process as most important and pressing.

• The Foundation honours the wishes of donors who direct their donations toward approved capital projects or a specific priority program. In recent years, examples of approved capital projects include the construction of the Birchall Pavilion and the maintenance of the Memorial Arch. The specific priority programs relate to the 4 pillars: sports and fitness, leadership & military training, academics and second language. Although the Foundation recommends that donors do not become too specific in how they wish to direct their monies, some donations are directed specifically to include such things as sports / rugby or military training / band, or academics / battlefield tour, etc.

e-veritas: Would you like to acknowledge a particular gift?

Glenn Allen: Yes, I would like to acknowledge the Class of ’74 support of the gift of the collection of original military sculptures created by Colonel (Ret’d) Andre Gauthier of Ottawa, to the Royal Military College. The art displayed in Yeo Hall adds to the life of serving cadets by being displayed in areas where cadets spend a lot of time; by educating cadets with respect to their Canadian military history; and by being shared with ex-cadets and others who visit and study at RMC. This is a very unique collection of Canadian military art sculpted by an officer of the Canadian Forces who had a very distinguished career including service with the Military Colleges.

e-veritas: You are currently a member of the strategic implementation committee of the RMC Club of Canada. What is the committee’s mission?

Glenn Allen: Yes, I am a member of the Committee under 9143 Captain (Ret’d) Bruce McAlpine (CMR 1972), President of Fulcrum. The implementation of the 10-15 recommendations from the Strategic Review of members services is an iterative process that may lead to a paradigm shift for the Club: some are more expensive or time intensive to implement than others.

I was one of the members of the Strategic Review Steering Committee of the RMC Club of Canada which published “The Road Ahead” A Strategic Review of the RMCCC Membership Environment on July 3rd, 2012. The Strategic Review Steering Committee was tasked by the General Council to conduct a strategic review in order to reconfigure member programs and services. The committee mission was to find the ways and means for the RMCCC to reconnect with its existing and potential membership. The final phase of this review was an on-line survey of the entire Club constituency. Under co-chairs 4976 Reg Watts (RRMC 1960) and 9143 Bruce McAlpine (CMR 1972), the work was done by volunteers on the committee together with support from other members, an external research consultant volunteer, and Panet House. http://www.rmcclub.ca/wp-content/uploads/Strategic-Review_Final-Report_oct2012.pdf

Glenn Allen: I was one of 100 classmates and others who attended our 50th year of graduation reunion in September, 2012. As a volunteer I am involved in several economic development and tourism organizations in Westport and Eastern Ontario. My wife Judith and I live in Westport Ontario on the shores of the Rideau Canal.

e-veritas: Would you advise cadets/Ex cadets and former students to get involved with the College extracurriculars/RMC Club? If yes, Why? If not, why not?

Glenn Allen: I would absolutely advise alumni to get involved with the College extracurriculars/RMC Club. Alumni get involved for various reasons, whether to develop skills and interests, family military ties, pride and love for college, association and affinity with the military, ongoing professional development, or to reconnect with friends and family. There are benefits to networking as a student preparing for your career, while building your career, and as a retired person. The RMC Club offers services and benefits, which improve as members use them. Most people do not necessarily think to participate in the RMC Club until they have been in the work force for awhile. I was involved in the Club in a formative time of my career, while my family and business was still relatively young. For me, the involvement in the RMC Club is about ex-cadets affiliation and friendships. There are many ways to get involved: Some alumni told us in the interviews that they prefer to maintain contact with friends and class organizations, and volunteer via social media such as twitter, facebook, email and websites. Others find that they value social contacts with their branches and classes, or the main club as they are posted to or travel to different cities for work.

e-veritas: Would you like to acknowledge a particular volunteer initiative?

Glenn Allen: I would like to acknowledge the Kingston branch and several of its members for their work in support of Heritage at the College. One project has committed over 700 man-hours of work over four years to protect all the pre WW II cadet files from deterioration. The work was completed on April 6, 2011. Each sheet of each of the 2828 files of the cadets who entered the College up to and including 1940 has been interleafed with a sheet of acid-free paper. This will protect the contents of the files from further more rapid deterioration. All files are now boxed and stored in the climate controlled workshop of the RMC Museum where they are readily accessible by researchers and others.

E3161 Victoria Edwards in conversation with G0055 Valerie Keyes who served as President of the RMC Club in 1998-99.