E3161 Victoria Edwards in conversation with 5604 Ken Smee (RRMC RMC 1962) who served as RMC Club president in 1986-7. In addition to providing leadership in the RMC Club and its Foundation, he served on the Board of Governors. He continues to serve as 1962 Class Secretary 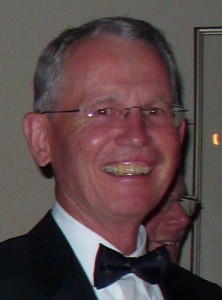 e-veritas: How did you come to be in Honours Mathematics and Physics at RMC?

Ken Smee: I started at Royal Roads in chemical engineering largely because my chemistry teacher in high school had made the subject very interesting. In my second year, Professor Clarence Cook, the Director of Studies, who also taught me physics, took me aside one day, and asked if I had ever thought of studying Honours Mathematics and Physics. As a result, I changed degree program, and graduated with a BSc in Honours Mathematics and Physics with First Class Honours. I was awarded the Governor General’s gold medal, and it turned out that I not only earned the highest mark in the graduating class, but also the highest mark in College history up to that point.

e-veritas: What extracurricular activities or leadership positions were you involved with atMilitaryCollege?

Ken Smee: I was certainly not a skilled athlete, so my memories are of the intramural program at Royal Roads (1958-60) and Royal Military College (1961-2) which I enjoyed very much. Amongst the many sports, I remember being involved in rowing, boxing, rugger, soccer, and X country running between Squadrons and Flights. Coincidentally, I was in Hudson Flight at both Royal Roads and RMC. I have fond/not so fond memories of racing whalers at Royal Roads. As the coxswain, I sat in the stern facing the bow, steered, coordinated the power and rhythm of the rowers and was thrown in the water at the end of the race for my efforts!

In fourth year, I served as a 3 bar cadet responsible to squadron headquarters for supply. At the time, the logistics role entailed making sure that everything supplied to cadets was indeed working as it was supposed to.

e-veritas: How did you come to be on the faculty of RMC?

Ken Smee: Upon graduation from RMC, I won a National Research Council scholarship to study for an MSc in Solid State Physics, which I did at McGill University in Montreal. While there I met Willie, my future wife, who was studying physiotherapy. We were married in 1965. I then went to 2RCHA in Petawawa, and although in the artillery, served as part of an infantry battalion in Cyprus with the UN. From 1966-69, I was lucky enough to be posted to RMC to teach physics, a most enjoyable and fulfilling vocation.

e-veritas: What were your duties when you returned to the RMC Physics department while on service posting?

Ken Smee: I had a number of experiences and responsibilities:

Ken Smee: In 1969 I left the Army and got an MBA atQueensUniversitywhere there were more RMC grads in my class thanQueens. I worked in finance for Alcan from 1971-4. From 1974-97, I had a great variety of jobs in the 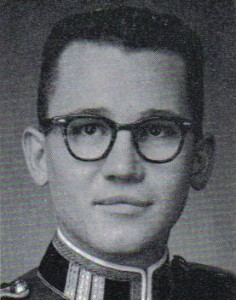 Ken Smee: I was on the Club Executive twice, first while I was teaching at the College, and then later, after a few years on the executive of the Toronto Branch. I was President of the RMC Club and after that, the Foundation, and represented the Club on the RMC Board of Governors. While I was President of the Club, the Royal Bank posted to me to Puerto Rico. Since video conferences hadn’t been invented yet and the phone lines weren’t great, I had to fly back to Canada periodically to attend RMC Club meetings and functions. I was very fortunate to have a very supportive and helpful Club Secretary, H2840 Col (Ret’d) Don Strong, who was a pleasure to work with.

e-veritas: As RMC Club president, you were inadvertently involved in a College Skylark

Ken Smee: Yes, on Reunion Weekend during the Saturday morning parade, the President of the Club always gives a speech to the Cadets and the parade attendees. While speaking I was surprised to hear laughter and talking to one side of the parade square. As I was not at a funny part of my speech, I stopped speaking to look at what was happening. A remote control vehicle was going along in front of the whole wing and then it stopped directly in front of me at the dais. After I retrieved a bottle of champagne, the vehicle beetled off. I think that the skylark was quite a bit more memorable than my speech!

e-veritas: What were some of the biggest challenges during your tenure as president of the RMC Club and RMC Foundation?

Ken Smee: We wanted the Club and membership in it to mean more than it did at that time. Without diminishing the importance of the Cadets and the Colleges, we increased the emphasis on caring for each other as Club members. The simplest examples of that would be assisting a member to find a job, or helping a member who is having health issues.

My finance background was helpful when I served as President of the Foundation in 1987-88. The board was starting to struggle with the impact of the tax laws on a charitable foundation in terms of the amount given to the Colleges relative to the amount donated in any one year, and also, the relationship between the Club and the Foundation.

e-veritas: You were appointed to the Minister of National Defence’s Advisory Board on the Canadian Military Colleges in the 1992-96 period.

Ken Smee: Yes, and the biggest challenge stemmed from the pressure of massive spending cuts from the Government of Canada in all areas of expenditure. As part of the cuts in the armed forces budgets, the Department of National Defence closedRoyalRoadsMilitaryCollegeand College Militaire Royal St-Jean in 1995. Feeling that the Advisory Board did not have enough influence and power, the Advisory Board recommended its own replacement with a Board of Governors for the Royal Military College. This happened in 1997 and I served as the RMC Club representative from 1997-2003 on the first Board of Governors. Under the Terms of Reference, the Board has the responsibility to ensure that officer professional military education is sustained in the long-term. The Board provides advice and recommendations to the Minister of National Defence on all matters concerning RMC. When H3948 Doctor John Plant retired, for example, I chaired the Search Committee which recommended the appointment of H24263 Doctor John Cowan as principal in 1999.

e-veritas: The Wither’s Report was a report of the RMC Board of Governors.

Ken Smee: One of the Board of Governor’s initial tasks was to ensure the recommendations from the Report of the Commission of Inquiry into the Deployment of Canadian Forces to Somalia as it related to undergraduate officer training were fully implemented. In order to achieve this, the Board struck a study group, chaired by H2951 Gen (Ret’d) Ramsey Withers, which undertook a thorough study of the undergraduate program at RMC, ensuring that RMC graduates were fully prepared to undertake all responsibilities expected of newly commissioned officers. I was the representative of the Board of Governors on the study group.

Ken Smee: Since I retired, my diary has not been quite so locked in.  Willie and I have three married children and eight grandchildren, who live in Toronto, San Diego, and Rhode Island, so lots of time is spent with them. In addition, we spend our time at our cottage north of Kingston, at our home in Toronto, travelling the world and…being Class Secretary of the Class of 1962.

e-veritas: As Class Secretary, you took care of the details when the class participated in the Reunion Weekend in September 2012.

Ken Smee: We had a great Reunion for our entry into the Old Brigade in 2008, and the format for our Reunion in 2012 for our 50th year from graduation was similar and very well attended:

•           Friday: Obstacle Course, assist with the presentation of Commemorative Coins to the

•           Saturday: Parade; assist with the presentation of College Cap Badges to the First Year

e-veritas: The Class of 62 developed an innovative Class memento.

Ken Smee: Yes. The Mackenzie Squadron (8) was known informally as “Slack Mac.” 5500 Mike McCavera drew cartoons featuring the adventures of Slack Mac for The Marker and the Class of 62 grad pin. A sterling silver version of our Class Pin featuring Slack Mac was prepared by Classmate 5611 Gerry Stowe, now Old Brigade Adjutant. It measures 1 inch high by 3/4 inch wide and has a “keeper” pin on the back. The pin is available for $35 at the RMC Gift Shop. https://rmcclub.ca/cart/

e-veritas: The Class of 62 have presented the RMC Club ties to the Graduates receiving RMC degrees both at RMC and at Canadian Forces Staff College since 2000s.

Ken Smee: The recipients of the ties continue to tell us how much they appreciate receiving them. When we did our Class fundraising for our entry into the Old Brigade Reunion, one of the main objectives was to raise enough money so that the Tie Presenting would have a self funding endowment and that was accomplished.

e-veritas: Outline your involvement with the Club today?

Ken Smee: Last year we were asked by the RMC Foundation to consider a new use for some of the Class of 62 funds.  As a result, the Class supported the equipping of the Kingston Military Community Sports Dome (KMCSD) with three electronic multisport score boards, special seating, and  electric carts while DND paid $4.2-million for the construction of the dome, foundation and turf field. Following the formal ribbon cutting presentation on Reunion Weekend with the Class in attendance, a rugby match between the (M) Varsity 2s against Ex Cadets was held as part of the festivities. Today, the field is used mainly by RMC cadets, residents and personnel of the base for soccer, rugby and other sports. It can be divided into three smaller sports fields for intramural sports and physical education courses. The Class was very pleased to be able to make a difference for the College and the Cadets with this donation.

E3161 Victoria Edwards in conversation with 3010 Peter McLoughlin, who served as president of the RMC Club from 1987-88.

E3161 Victoria Edwards in conversation with G0055 Valerie Keyes who served as president of the RMC Club from 1998-99.

E3161 Victoria Edwards in conversation with 4100 Jacques Choquette who served as president of the RMC Club from 1988-9.

E3161 Victoria Edwards in conversation with 5533 James Glenn Allen P.Eng, who served as president of the RMC Club from 1976-77.

E3161 Victoria Edwards in conversation with H7543 Senator Joe Day, who served as president of the RMC Club from 1994-95.

E3161 Victoria Edwards in conversation with H2897 MGen (Ret) Herbert Pitts who served as President of the RMC Club from 1981-82.

E3161 Victoria Edwards in conversation with 5758 Michael Morres, who served as president of the RMC Club from 2000-1.