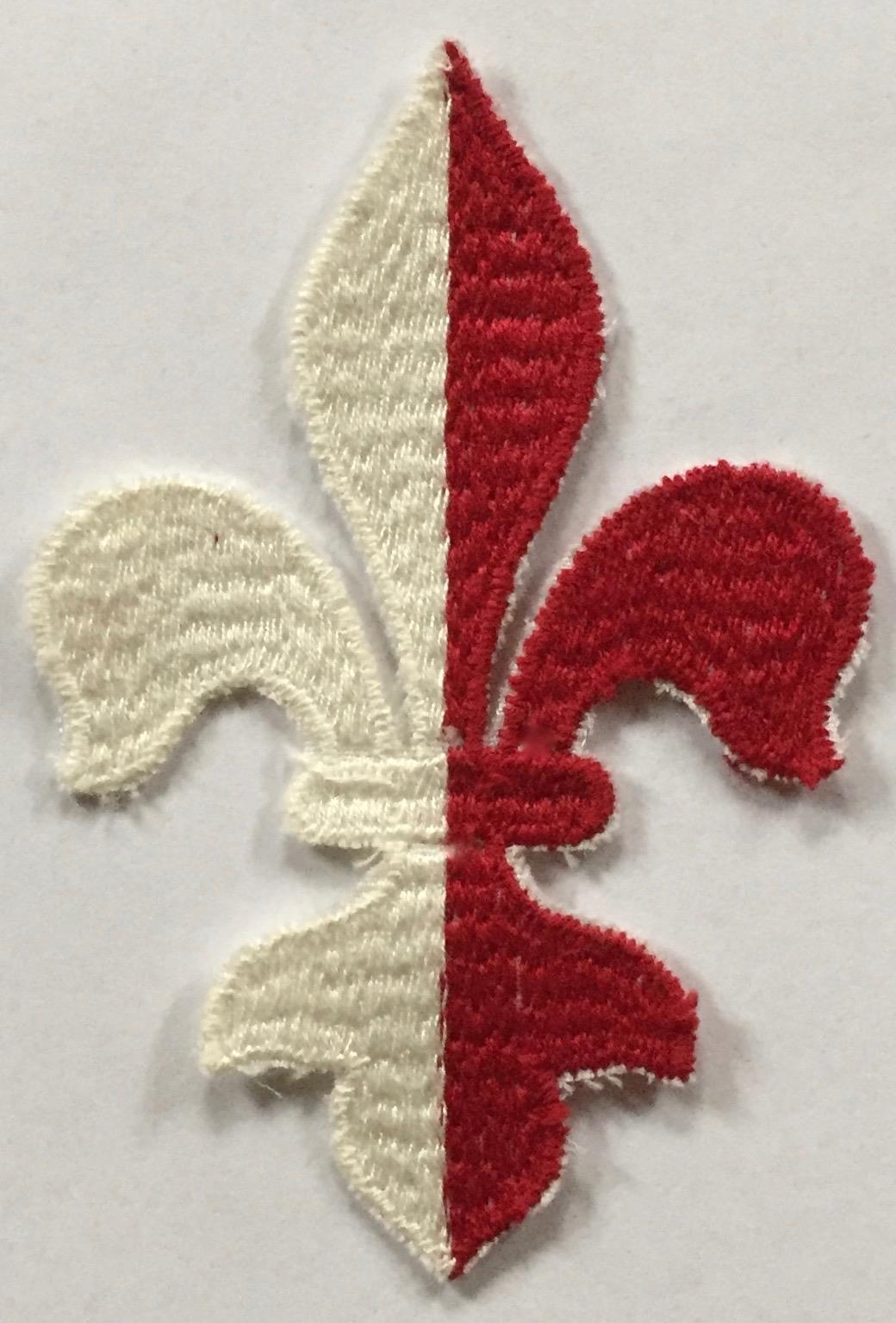 Leadership may manifest in many forms and sometimes at moments unexpected yet proving a vital factor in staying alive. Its qualities may appear even in younger people. The following vignette is a scenario that developed among a group of three 15 year old Explorer Scouts during a visit to the then International Scout Chalet in Kandersteg, Switzerland, now the Kandersteg International Scout Centre. The scouts were the sons of officers in U. S. Army units then stationed in the garrison at Schweinfurt, West Germany. The Centre is a wonderful experience for scouts today as it was in its earlier form at the time of the vignette.

The leadership demonstrated by the young men in the situation described below that in the event, proved similar to other situations that would present in later life, was an indicator of capability and potential. The event reinforced tendencies and perspectives toward the exercise of leadership in later life.

The bus transporting the scouts of the American explorer post from the U. S. Army garrison community in Schweinfurt, West Germany had been traveling since late morning through Bavaria and into Switzerland in route to the International Scout Chalet in Kandersteg. It was April and the spring break for the dependent schools in Germany. It was late night, the bus had been delayed by a Spring blizzard and the driving conditions had deteriorated dramatically as the bus climbed the winding mountain road leading to the high mountain Kandersteg valley. Several times the driver had experienced white out conditions and almost left the road. The situation had the attention of the 16 scouts and two accompanying adult sponsors. It was absolutely pitch black with driving snow that was, except for the bus’ headlamps, making visibility almost impossible. 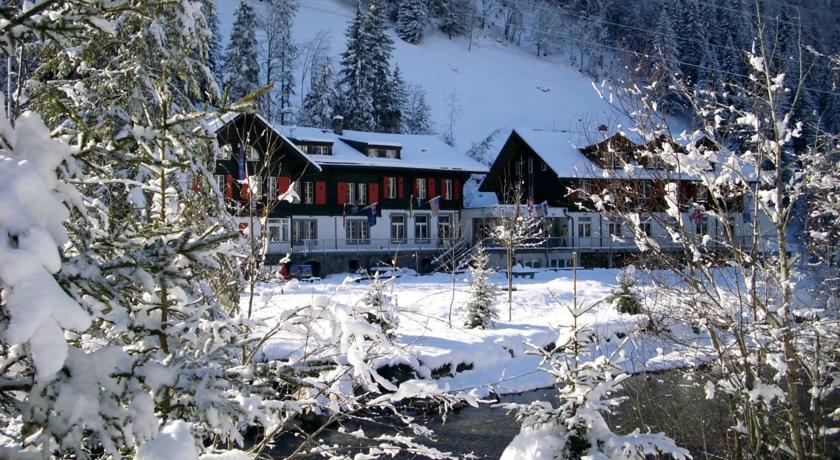 Eventually at almost midnight, the bus slowly made its way into the parking area adjacent to the chalet. It was a large building in form of the traditional Swiss mountain chalet.

The U.S. explorer post’s representative entered the chalet and made contact with the chalet staff. Shortly afterward, the weary travelers were escorted into the chalet and directed toward their area in the building.

The chalet operated on a European youth hostel format. Accommodation consisted of Spartan rooms with wood frame bunk beds with rope suspension and thin mattresses. There was no heating. Lavatories were common and on each floor with open showers but no hot water. Showers were cold.

The scouts took little time to get their gear inside and into their bunks for some needed sleep. Regardless of the excitement about the coming week and promise of adventure in the Kandersteg Valley, exhaustion set in and, despite the very cold accommodation, all scouts were soon asleep in their assigned bunks.

When morning came and the wake up call sounded, the scouts crawled out of their bunks, washed in the sinks, dressed and made their way to the chalet’s refectory. The refectory was a large common room on the chalet’s first level. Its walls were of unfinished wood board panels. Long trestle tables, with long trestle benches on both sides of the tables, furnished the room.

Each table had baskets of hard crusted German style rolls, Swiss butter and jams, cheese and some sliced meats. The scouts ate quickly in the gathering throng in the refectory meeting afterward to review with the explorer post sponsors the plan for the coming week.   After reviewing chalet and post rules of conduct and how the explorer post would operate during the stay at the chalet the scouts would begin their week long program.

The plan was deliberately designed with a great deal of flexibility in the program for the week. It oriented on forming small teams of three and four scouts emphasizing independent activity that took advantage of the range of activities available such as hiking, climbing, ski-lift rides, skiing, and craft activities.   The Kandersteg Valley was a major destination for other youth groups, families and people on weekend trips, and other recreating groups and gatherings. It was a very popular and well visited destination in Europe.

The town, sitting deep within its high mountain walls, had a large number of hotels, bed and breakfast chalets, hostels, camp grounds, restaurants, taverns and clubs. Evenings were active times in Kandersteg. Though the scouts might certainly be encountering young ladies their age and might have opportunities to socialize, the post had a curfew time to be assembled on the chalet with a set lights out time per chalet rules.

As the program shook itself out, one group of three scouts began an aggressive touring program that took in the ski lift up one of the mountain slopes, hikes to several of the upper valleys and eventually rock climbing. Two of the team’s fathers had been stationed in the Ft. Bliss area previously and had done a lot of rock climbing in the U.S. southwest.

Interesting to all three scouts coming from military families during their hiking in the upper valleys was evidence of Swiss Army training. Pre-prepared structures for explosive charges were found in the roads. Positions were found for mortars and other crew served weapons. Green and red plastic expended blank cartridges were found in a number of locations and several concrete fortified positions were noted.

The scouts also enjoyed the town and certainly meeting some attractive young ladies at the different venues. The week passed quickly. As the end of the visit approached the two rock climbers of the team pushed for a rock climbing expedition up one of the valley mountain walls. The non-rock climber third team member had some reservations and expressed them but was assured by the other two team members that it would be manageable and safe.

On a bright sunny morning near the end of the visit, the three scouts struck out to work their way to the slopes they would climb. They traveled with little to encumber them except the clothes on their back. They carried no equipment, just a small amount of food to eat at noon time. 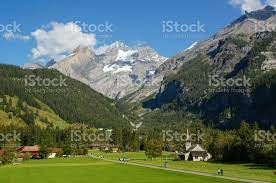 By noon the team had reached the base of the mountain face they would climb. The approach had been gradually getting steeper as they proceeded upward on the winding trail. The face they were preparing to climb was a varying slope that ranged between 70-80% and in some places straight up. The terrain varied with some tree, grass, and scrub growth and areas of rock.

The scouts scrambled up the face of the valley wall, the two more rock climbing experienced scouts in the lead. Higher and higher the scouts progressed. Perhaps 3,000 feet up the trailing scout made an uncomfortable discovery. His right foot was supported by a small outcropping of rock of about four inches or less. His left foot was supported by an equally minimal purchase. His left and right hands were extended out at chest level holding basically tufts of grass and one seemed to be giving way.

The scout was essentially pressed against the valley wall with a slope of some 85% or more. The scout realized he was losing his purchase, one handhold was giving way and the other wasn’t much better, and he could not see a secure place he could move to going upward. He looked down and directly under his feet he could see a bright green sunlit mountain pasture with grazing cows, the cows no larger than pinheads. The thought occurred to the scout that he was about to “call it a day”…but there was no need to panic. If he lost his hold it would be a fast trip down. He improved his purchase as best he was able and called up to his teammates that he was unable to move.

Already having moved a distance ahead, the companion scouts worked their way back down the valley wall and began coaching their less experienced teammate. Gradually, the trailing scout was able with the coaching to work his way upward. Several hundred feet further up the team reached a ledge with width enough to stand. The ledge allowed a lateral downward movement that connected to several other widening downward sloping avenues to the slope the scouts had used to approach the valley wall.

Near miss averted, the scouts made their way down into the valley and back to the Chalet…it was late afternoon. A day later the post packed its gear, loaded the bus and said farewell to Kandersteg and the good time enjoyed over the week. The bus began the long drive back to Schweinfurt. One scout in particular appreciated being on the bus headed back to his family.

One might question the form of leadership demonstrated by two of the team members in this case. Their colleague had no training or background in rock climbing and made that fact known. He was a good athlete and in shape, but to take on an almost straight slope of several thousand feet may have exceeded good judgment on the part of the other two team members.

To their credit, when the less experienced scout confronted a dire situation on the rock face, they responded with calm and worked their way back down the face at risk to themselves to aid their fellow team member.  They effectively coached their colleague up the face of the mountain side. The effort succeeded and the scouts made it back to the valley safely. 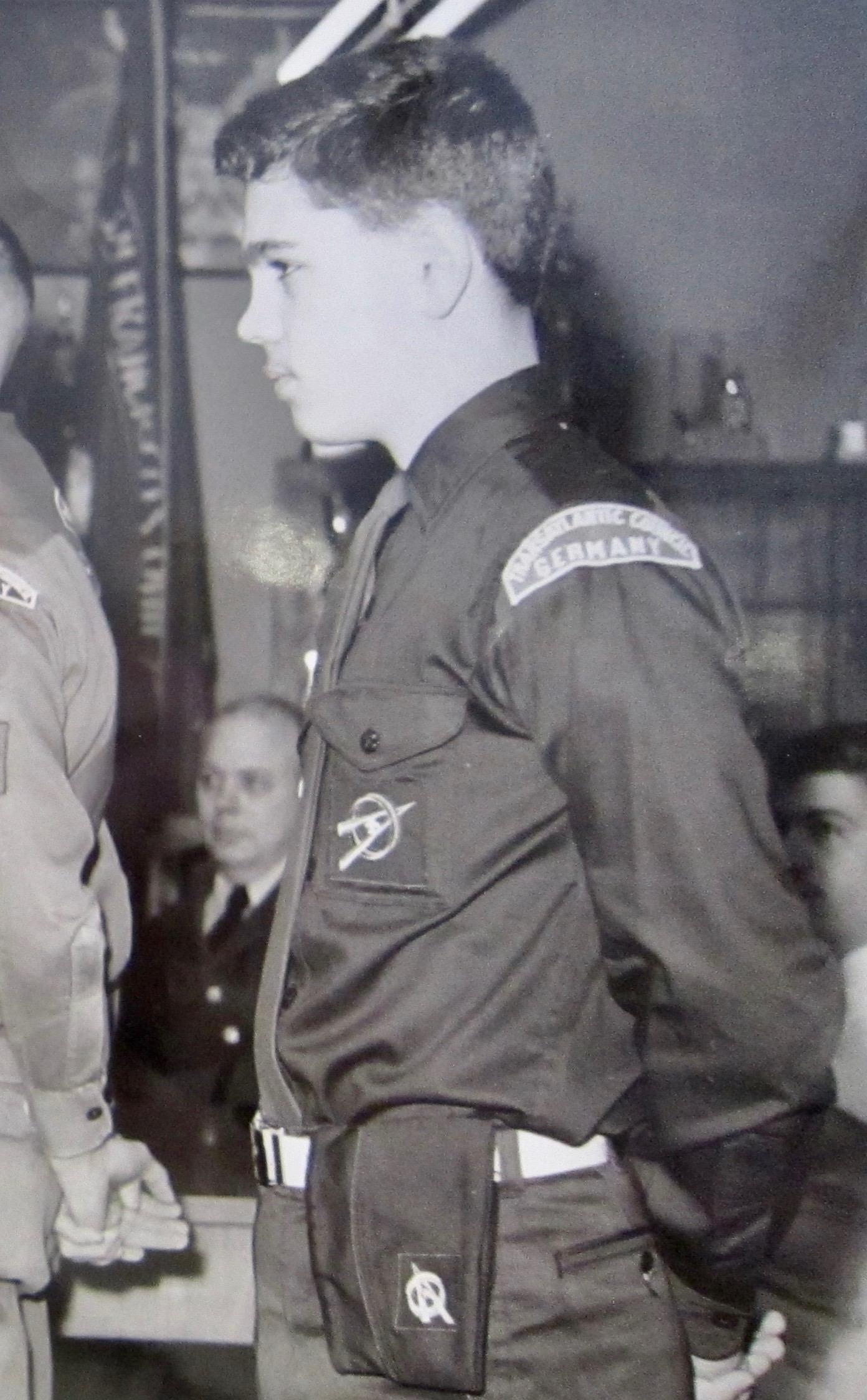 One of the Explorer Scouts of the team

Some leadership “take aways” the scouts learned that they would reflect upon in later leadership roles are worth review. One was that situations can go badly. When they do, calm is essential…the leader must act. But the leader must keep their wits and think through the situation if worse developments are to be avoided.

In this case, the two rock climbing experienced scouts found the team in a situation that exceeded the skill and capabilities of one team member.  All three assessed the situation without losing their heads. They remained calm and focused. They thought through the situation and acted. They pulled the situation off successfully.

It was 1962…all three scouts would have ample opportunity to apply the lessons they had learned over the coming years. And the first time rock climber would re-embrace rock climbing with a vengeance in the North Georgia Mountains in U. S. Army Ranger School and later in the New Mexico Mountains.  The leadership lessons learned at Kandersteg would be remembered.