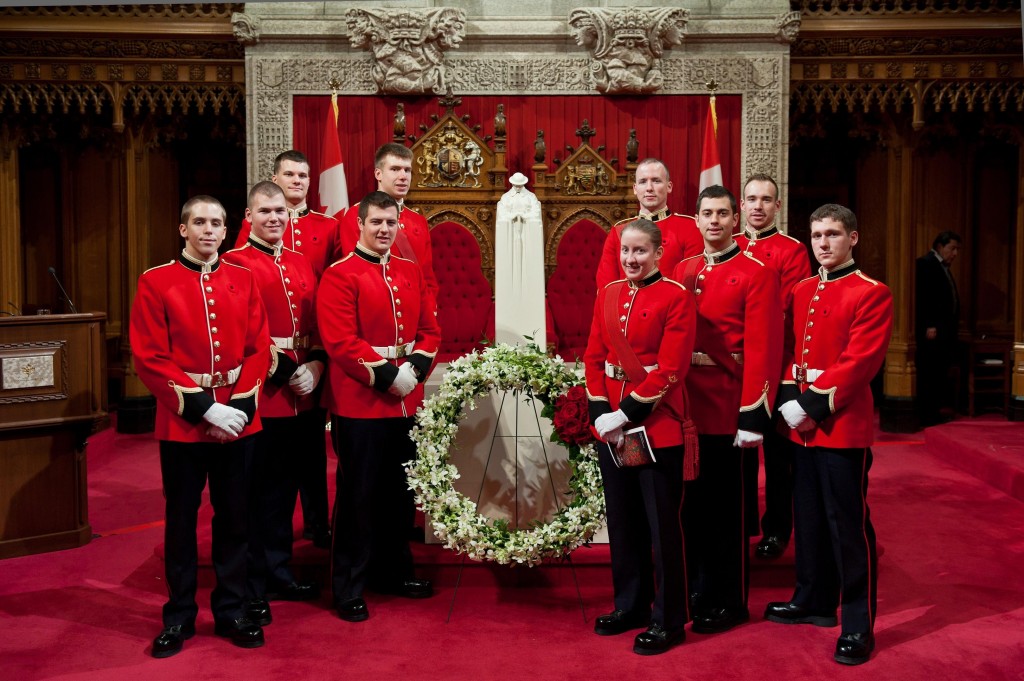 At 0500 on 4 Nov ’11, ten RMC Officer and Naval Cadets boarded a van with their scarlets and some extra large double doubles. We were heading to the Chamber of the Senate in Ottawa to witness the official opening of Veteran’s week in Canada. The cohort consisted of the DCWTO (III) Steven Trainor as IC of the trip, (IV) Andrew Noris, (III) Francis LeBoeuf, (IV) Jean-Luc Plante, (II) Travis Lane, (III) Luc Abel, (I) Derek Frank, (IV) Melissa Chandler, (IV) David Brosseau and (III) Jeremy Appolloni.

Our group arrived early and found itself with over an hour of hang time before it was required in the chamber. So after a quick snack of some juice and more coffee, and after begging the senate pages to show us around, a tour was authorized. Our group got to explore most of the parliament that morning, as there were no other tours starting until much later. We had exclusive access to the parliamentary library and marvelled at the new olympic display within. We also had a chance to see inside the house of commons as well as the spectacular view from the clock tower. However, the tour hit a high point as we were given access to the beautiful memorial chamber. This room is incredible, as it houses the names of all Canadians who have given their lives in wars. To punctuate their sacrifice, nearly everything in the room is, in some way, an artifact of war. When you realize that, as you’re reading the list of Canadians who died at Vimy Ridge, you’re actually standing on wood and stone and brass shells which were taken from that site, it is quite an experience that I’m sure none of us will soon forget.

Once our tour was over, we proceeded to the Senate chamber where we were seated directly behind the speaker’s podium. We watched as some of Canada’s top soldiers filtered in, including Canada’s top soldier, General Walter Natynczyk. We quickly realized that we were not just attending, but we were a backdrop to the ceremony. We were to be a reminder to everyone of the young faces which will never grow old, and which, with energy and courage, fought for peace wherever they were needed.

After the ceremony, there was a meet and greet in the Senate foyer and the group was once again able to get some much needed caffeine. The CDS honed in on us and imparted a few words of wisdom for us all. He asked how things were going and gently reminded us that these are the good old days, so we shouldn’t let them slip by unappreciated. After 2 or 3 more coffees, it was time to go. We got changed, loaded back up into the van and were back on the road to RMC. It was a great day, made more valuable by the opportunity to tour the parliament building and to visit the amazing memorial chamber.