“It’s always about the children.”

My company was called Pacific Show Productions, which I joined right after I retired from the Air Force in 1985. We produced corporate entertainment shows for conventions and various business meetings in Canada and the USA, with a few exceptions, some of which were these show tours for the Canadian Forces. In addition to the three tours mentioned in my article, we also produced one for the troops in Alert, NWT. I sold the company in 2004 and went on to teach event production at Capilano University and to write 5 textbooks and 1 book of humorous anecdotes about my time in “showbiz.” 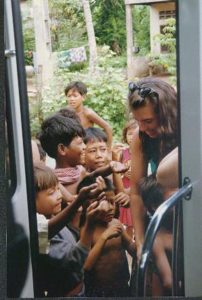 Nancy, one of the performers, with the children in Cambodia. (Courtesy Doug Matthews.)

Cambodia, July 1, 1993 – A few kilometres from the infamous Killing Fields, our bus full of Vancouver performers stops to give out Canada pins to a group of laughing children. Several have only stumps for legs or arms, the unexploded landmine legacy of the Khmer Rouge. That night, in the 48C heat of the Cambodian jungle, the memories of the children and their proximity to death is fresh in the performers’ minds as they stage a highly emotional show for our UN troops overseeing the first real “elections” in the country since Pol Pot was ousted.

Bihac, Bosnia, November 1997 – A break-off contingent of our entertainers stops to perform a short show for some of our NATO soldiers in this bombed-out, isolated outpost. At a local school, we are surprised to see a choir of 100 Bosnian children who have prepared a special performance for us. A tiny girl, not more than 10, reads a letter in perfect English, telling how much she appreciates what the Canadian soldiers are doing for them. Then the children, who live with an every-day existence of destruction and poverty, sing with all their hearts. Our performers, Juno award winners Farmer’s Daughter, all of whom are hardened veterans of many road trips and tours, are brought to tears. 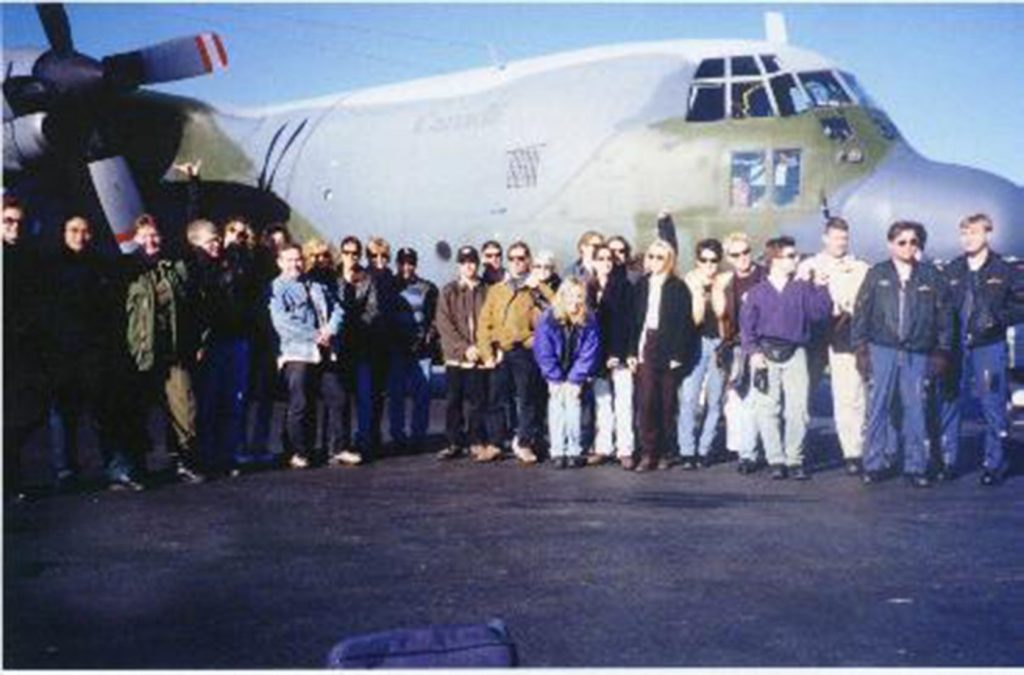 The performers before leaving Bosnia in a C130 Hercules. (Courtesy Diana Frances.) 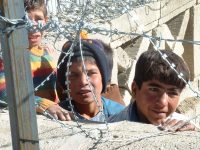 Afghanistan, November, 2003 – Vancouver improvisational comedians Rock, Paper, Scissors are touring the bombed-out shell of the Queen’s Palace near Kabul when four rag-tag kids approach to watch the visitors and play hand games through the surrounding razor wire. The desire to give away warm mittens and clothes to protect them against the cold is hard to resist and becomes heart wrenching when they realize that to do so would jeopardize the safety of future patrols by our soldiers due to the sheer numbers of children who would be clamoring for free goods.

Our small production company has been privileged to produce four entertainment show tours for Canadian troops serving in these far-flung corners of the globe. Our performers have served in the tradition of The Dumbells who began it all entertaining Canadian troops during WWI, Wayne and Schuster in WWII, and the WWII tours of Bob Hope and the USO. 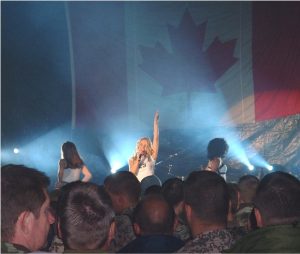 After every tour, there are similar emotional stories to tell. Although our task has always been to provide morale-boosting entertainment for Canadian troops, we are afforded the occasional glimpse into daily life as it really is in these countries. In every case, we have discovered that the Canadian military is universally loved and appreciated, but the Canadian public often misunderstands its role, which generally is to assist with returning the countries to some semblance of terror-free life. Perhaps Jake Leiske of the pop group Farmer’s Daughter (now The Daughters) said it best, “I will never look at my country, freedom, family, the military or the blessings I experience every day the same way again.” For us, the entertainers and the company responsible for creating the shows, we know in our hearts that by helping our Canadian troops we are in turn helping the people of these countries. We know it’s about their future. We know it’s about the children.