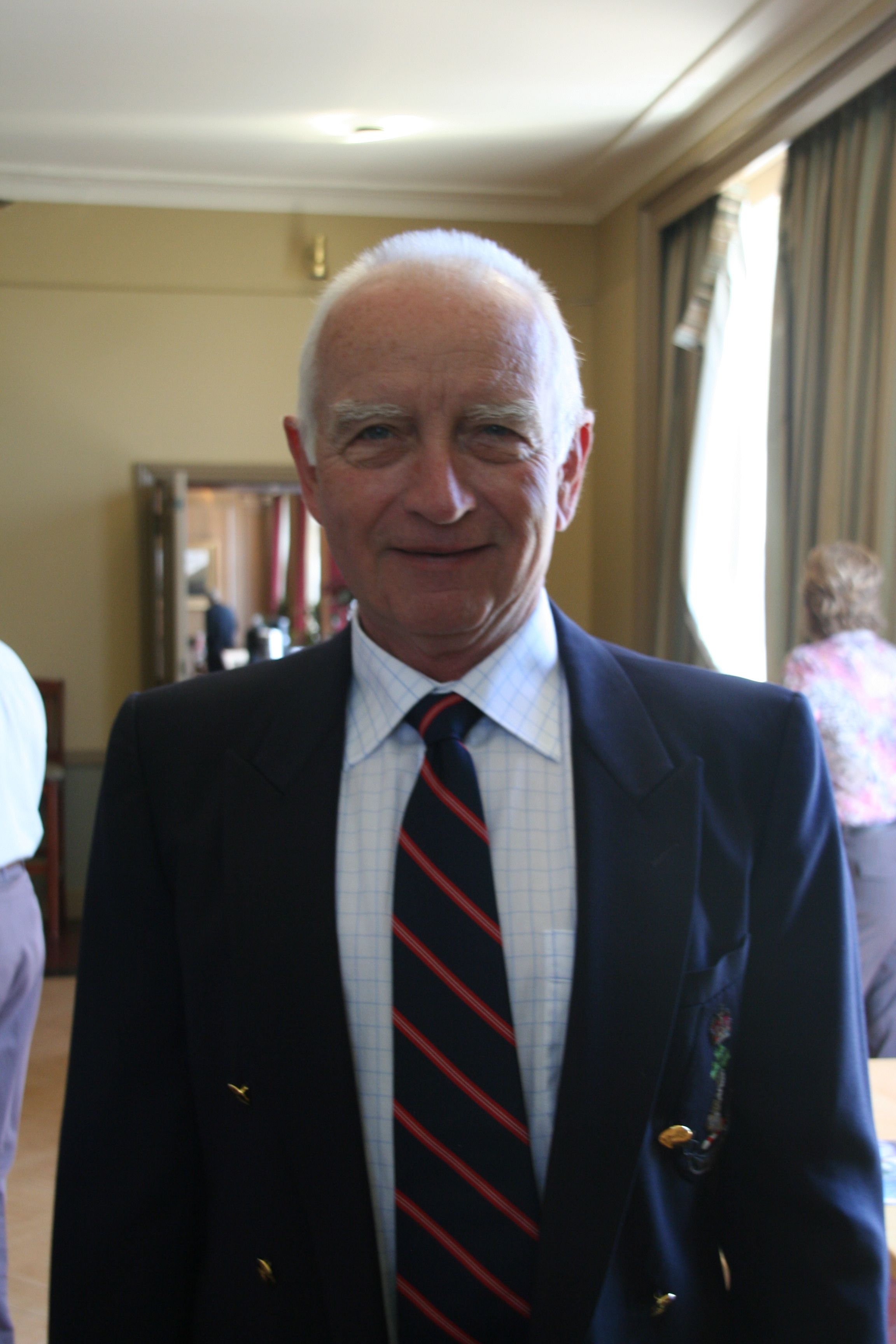 Upon graduation, students are released into the much wider world and do not know what to expect. This can be an exciting – but ultimately fearful – experience. 7838 Henri Cardinal has led a rewarding career since his graduation from the Royal Military College of Canada, and he has lived an exceptionally varied life. Cardinal has taken his teachings from RMCC and applied them across the span of his career life – making him an admirable icon of life experience.

Henri Cardinal joined the Canadian Forces in 1964 and enrolled at the College Militaire Royale in Saint-Jean, Quebec. His father was in the police force, and Cardinal looked up to him immensely. Cardinal spent time in the Army Cadets during high school, and he developed a taste for the disciplined life that the military provided. Cardinal’s main desire at the time was to pursue a career in the police force, and he was hesitant in joining the Army. However, he realized another option after attending an airshow: a fruitful career as a pilot was waiting for him. His father encouraged that he still pursue further education; he said that it was important to be able to have something to fall back on should his career end shorter than expected. With numerous siblings and his family’s modest means, a University education would have been very difficult for Cardinal.

“I joined the college to get a degree that my father likely couldn’t afford, and it was insurance; I graduated in engineering, but I never spent a day as an engineer!” explains Cardinal, “Yet, my training as an engineer provided me with a logical mind when approaching problems and increased my ability to calculate.”

He graduated in 1969 and says that while his five years spent in the system (3 years at CMR, and two years at RMC) were tough, he realizes now that he did not genuinely appreciate what his time at RMC had provided him. According to Cardinal, the comradeship found in the college is unparalleled compared to many other places, and it truly helped shape him in discipline and self-improvement. It was not until he took a few steps back – or five years away from the college – to realize just how much the college shaped him. During his time at RMC, he also met his future wife, Brenda Hicks, who was studying at Queen’s University. For this, he says his time with the college is more important than he could ever imagine.

After graduation, Cardinal left for Pilot Selection in Borden. This spanned for 13 months, after which he was sent to Moose Jaw. Around this time, delays started to appear because too many pilots were graduating and too few operational positions were available. For a year’s duration, he and several other pilots flew aircrafts in order to maintain the aircrafts and their own abilities. Although he was recommended as a fighter jet pilot during his time in Moose Jaw, the numbers did not stack in his favour and Cardinal was sent to his first and only operational unit in Valcartier where he began to fly helicopters. These came with unique challenges that he formidably encountered, but he left the Regular Force in the summer of 1975 at the rank of Captain. 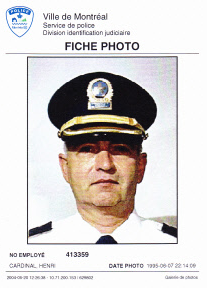 Reflecting his reasoning to leave his position as a pilot, Cardinal says, “I left because I wanted to see the immediate results of my job: if I’m a police officer and give somebody a ticket, I have done something; if I stop and help someone find their way, I have made a difference. It might have been different had I been in search and rescue, but we were simply preparing for the Cold War – which was a fight that we did not believe either side was foolish enough to start.”

In January 1976, Cardinal fulfilled his early ambitions and became a constable in the Montreal police force. This job proved to be immediately exciting due to the ’76 Olympics. During this time, he helped protect areas during the construction phase and was inside the stadiums during the games. Cardinal found himself in many different stations before arriving to the one he truly desired: the downtown station. Under no means was his time before this less rewarding;  for four years, he was a member of the SWAT division and was involved in several drug raids and the capturing of high-profile criminals. Much to his pleasant surprise, the downtown area was even more exciting than this. He claims, “there, it was highly noticeable when the normal people left to go to bed and the other types emerged.”

After eight years as a constable, Henri Cardinal was promoted to a Sergeant. He was then made a Lieutenant a year (minus a day) later, and he took on the command of several constables and a few sergeants. He learned much from his time in the military, and this experience helped him a great deal in this position.

“I found it is much better to earn people’s respect than them liking you. I’ve seen many people in leadership positions who wish to be ‘popular’ and don’t do the jobs that they’re supposed to do as a supervisor. Their subordinates like them because they get anything they desire, but they do not respect the leaders because they see them as pushovers,” he details, “If you strive to earn people’s respect, they may not like you because you’re tough, but they will follow you if you enforce discipline on not only them, but also yourself. This means leading by example.” 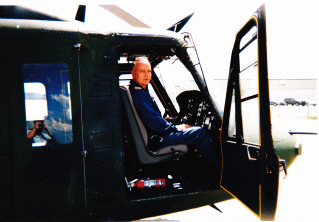 During his time as an officer in the Canadian Forces and a member of the Montreal Police, Henri Cardinal never fully ended his ties with the military – helping him later in his career. After verifying his schedules and smoothing a few technicalities, he joined the reserves in March 1980 and continued to fly with 438 Squadron in St. Hubert. The unit was equipped with helicopters soon after Cardinal’s arrival, and he was once again operating them. Coincidentally, the director of the police force dreamt of uniting with the Royal Canadian Mounted Police in order to engage in a helicopter detachment. With Cardinal’s maintained flying experience, he was a shoe-in for this position. He would fly missions for the Montreal police and RCMP for quite some time. Cardinal’s adjacent responsibilities within the reserves increased, and he was made the Commanding Officer of 438 Squadron from March 1990 to June 1993. During the Oka Crisis in 1990, he flew transport and patrol missions. After this, he was promoted to Colonel and took over 1 Wing from June until 1996. Before his departure from the reserves in 1999, his responsibilities swelled to advising the Commander of 1 Wing (Kingston) on Air Reserve matters. Montreal police, Henri Cardinal encountered many types of people under his command with varying levels of experience. He believes that his time at the Royal Military College truly helped with being able to deal with this because he was able to learn from his mistakes early on. Cardinal stresses the importance of appreciating where you currently are, but he also has experienced the difficulty of stepping out from your current situation to analyze it.

“The best and most rewarding position for a cadet – or anyone else – to be in is when they are able to get to the point where you can appreciate where you are while still there,” says Cardinal, “It isn’t advisable to simply look forward to graduation and marching through the arch as your goal. This isn’t deliverance; you are losing many good years.”

The police force changed the weapon standardization before Cardinal’s eventual retirement, and his final position was supervising and co-ordinating the many instructors in the shooting programs at the Police Training School. He continued shooting as a hobby after his retirement in 2006, but Henri Cardinal mostly travels now with his wife. He has a motorcycle that he uses actively, and he frequents the gym to stay in shape. After a very rewarding career, he is able to look back with ease and appreciate each milestone required to get what he desired.