I was posted from the 2nd Battalion to the 1st Battalion, RCR, stationed in Germany in the late summer of 1964. Some weeks later I was approached by then Assistant Adjutant 5496 Lt. Roy G. S. Lampard (RMC 1962), chair of the St. Mark’s (Protestant) Chapel Men’s Club, and asked if I would undertake the designing of a window for that chapel. I chose as the theme Mary, the mother of Jesus, with her son at the age of twelve. Jesus stands in front of his mother, who is seated.

This window was installed and dedicated, as far as I can recall, in time for Christmas of that year.

As I had never undertaken such a project before, there was much to learn about the process. One aspect which I was quickly made aware of was that it was necessary to allow for the vent window to be useable. As it turned out, this was a simple modification to make in the original design. It was also worthwhile towards preparing me for the unexpected request I was to receive a short while after the New Year, to design an additional three windows, one being for the Protestant chapel 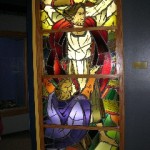 Jesus calming the waves, with the “cross” configured behind “anticipating” the coming crucifixion and the other two for the Catholic chapel.

In the case of the Catholic chapel windows, I was directed to develop a baptismal theme. Being in Westphalia, the theme for the second window in the Catholic chapel came easily: St. Boniface, patron saint of Westphalia …. St. Boniface was the “Apostle of the Germans”.

As can be seen from these photos, the style used in the designs changed from that of the “Mary and Jesus” window to the later three windows. During the three months between actually working on the full-scale drawings, I was able to do some traveling about the country on leave and was heavily impressed and inspired by the singular strength of the contemporary windows I came across in various small chapels and churches. The foreman at the Paderborn Glaswerks remarked during a visit I was permitted to make to see the windows being manufactured: “How is it that a Canadian designer can capture the Germanic style so well?” The first step towards completing this assignment was to draft a series of coloured cartoons (miniatures) of what I recommended. Once approved, it was a matter of producing the three full-scale working layouts for the factory workmen to use.

With no formal art training behind me, I also had no formal studio in which to complete the necessary drawings for the stained glass window manufacturer. Only the floor of my room at the officers quarters at Fort York. Preparing the layout for the first window had proven relatively uncomplicated; I was in good physical shape. However, before getting underway with the final three, I sustained a knee injury during a soccer practice at the base, which sidelined me from platoon responsibilities for several weeks. Stretching out on the floor beside the panels of paper on which I was mapping out the details of each design proved somewhat awkward with a leg cast to contend with, but as I was to be able to share with others later – including my many art students at a junior high school in Nova Scotia where I taught for some eighteen years before retirement – I became so engrossed in what I was doing that I regularly lost track of time and had to be reminded to get some food or to go to bed. I had no idea of time: I loved what I was doing so intensely. And awakening to that specific reality – of how time can mean nothing when you are doing what you are truly meant to do – was to lead to my resigning my commission some months later, leaving the Regiment in September, 1965, to give myself over to an arts career full-time.

These three windows were installed and unveiled in two separate ceremonies in July at Fort York, 1965, Battalion Commander Lt. Colonel Terry Lafferty officiating. It had been suggested that HRH Prince Phillip might do the honours while visiting Fort York as the Regiment’s Honorary Colonel-in-Chief for the Trooping of the Colours, but it was quickly pointed out that that would be inappropriate, given that he could not be seen to prefer one denomination over the other by going to one of the chapels before attending to the unveiling in the other. A sticky wicket, that.

The 1st Battalion completed its tour of duty with 4CIBG in the fall of 1965, to be replaced by the 2nd Battalion. Upon this battalion’s return to Canada in 1968, Fort York was returned to the German authorities and the stained glass windows were crated and shipped back to Canada with all other battalion and regimental materiel. Only two of the windows, however, arrived at Wolseley Barracks in London that fall. It would not be for a few years thereafter that a third window, “The Stilling of the Waves”, was discovered and identified in its crate in a hangar at CFB Trenton. That said, to this day there has been no sign of the original first window, “Mary and Jesus”, nor any hint of what might have happened to it or where it might be now if it in fact still exists. A mystery yet to be solved.