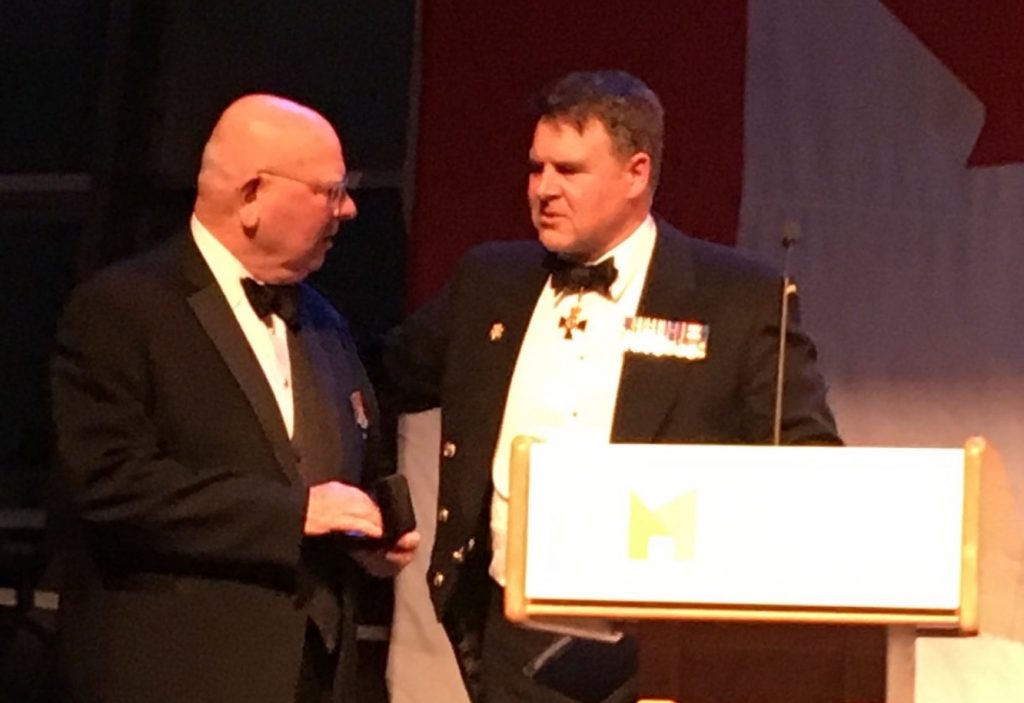 B of A Dinner in Ottawa

The 2018 Battle of the Atlantic Gala Dinner was held at the Canadian War Museum, Ottawa on Thursday, 3 May.

According to 5440 Tony Goode: “A good number of cadets were in attendance at that dinner. The MND singled them out in his remarks;  Jim Carruthers was awarded the Admiral’s medal at the well attended event.”

***
No assurances, clarity from defence minister on future of air force pilot training at Southport

Twin athletes from Kingston to stick together with military career

Military adds more generals and admirals than soldiers or sailors

Job placement program for veterans was a flop, audit finds

Conrad Black: In defence of our brave and honourable Vice-Admiral Mark Norman

Veterans’ charitable organizations struggle to raise money throughout the year and yet they do so much to help current and former military members and their families.  To deliver their programs, they need to have a sustained funding model and worry less about sponsorship efforts.  The adage that ‘necessity is the mother of inventions’ stands true here as a group of ex-cadets joined with other veterans and members of the financial industry and seized on an opportunity to benefit veterans’ charities as well as act as a vehicle for potential personal financial investment.

“I’ve worked with many different veterans’ charities and I see how committed they are to their cause and the amazing work that they do,” explains Arcs of Fire Investment (AOFi) founding Board Director Cybele Wilson (class of ’98).  “Unfortunately, charities depend on donations which can vary from year to year.  These charities need a sustained funding model and the AOFi Balanced Fund provides an innovative way to invest while a portion of the portfolio managers fee is reinvested into the Veteran Fund, a Not-For-Profit Foundation partner.”  The Veterans’ fund is affiliated with Veterans organizations including: Wounded Warriors Canada; Team Rubicon; Veterans Emergency Transition Services (VETs) Canada; Paws Fur Thought; True Patriot Love; The V42 Foundation; Aboriginal Veterans Autochtones; and The Canadian Institute for Military and Veteran Health Research (CIMVHR).

The AOFi board teamed up with financial experts with Cumberland Associates Investment Counsel and Norrep Capital Management and received regulatory approval in Fall 2017.  The Fund is RRSP, RESP, TFSA and LIRA eligible and is available through the Mutual Fund Dealer Advisory network and Fundserve in every province in Canada, except Quebec, where regulatory approval is being sought.

Cybele Wilson explains that, “there is an unexplainable bond that is formed between classmates at the military college where we intrinsically look after each other and we trust that if we are having a difficult time that our ‘college buds’ will have our backs.  I believe that our idea to help veterans’ charities through an innovative funding model is an extension of what we learned at RMC about comradeship and leadership.”

'Zinger' takes over as Chief of the Air Force