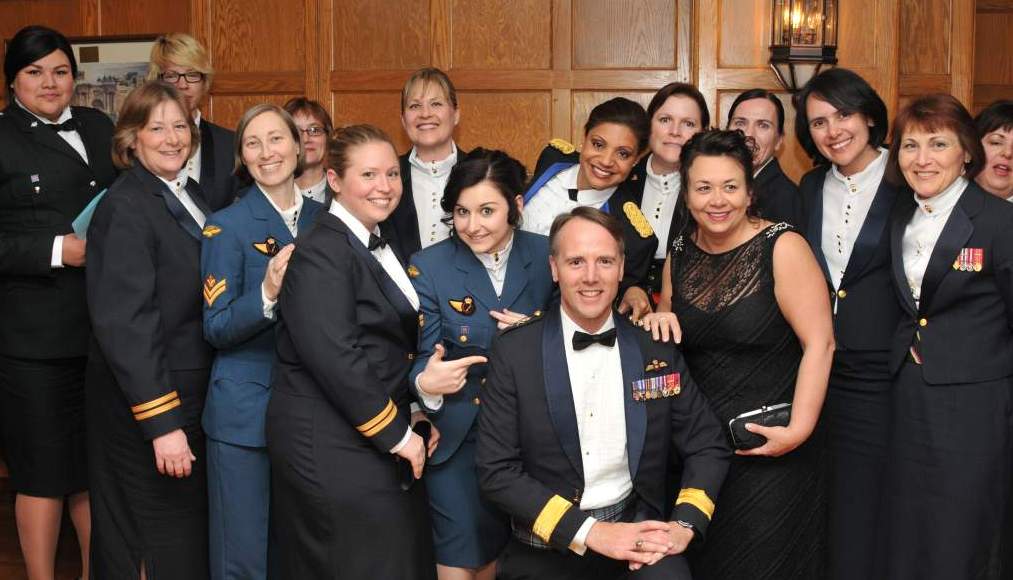 Caption: A ‘thorn amongst some roses’. A good time was had by all at the  Fort Frontenac Officers Mess  where staff from 1 Wing, Kingston celebrated the RCAF’s 90th birthday with a classy “All Ranks” Mess Dinner. RMCC commandant, Brigadier-General Al Meinzinger was the Guest of Honour.

This year, April 1st marked the 90th Anniversary of the Royal Canadian Air Force. Throughout these 90 years, the RCAF has made a remarkable impact on Canada and the world. RMC has had noteworthy involvement in the RCAF history led by very brave airmen like First World War flying ace 943 Air Marshall Billy Bishop (entered RMC 1911), who attended RMC. This forged the groundwork for other brave airmen and ex-cadets such as 13738 Colonel (Ret) Chris Hadfield (RRMC RMC 1982) who not only made the journey to space, but helped lead it. He took the Air Force motto to heart, “Per Ardua ad Astra”, through adversity to the stars. Graduates at RMC have and will continue to serve with distinction within our RCAF.

RMC Ex-Cadets and the RCAF

1815 Air Commodore A. D. Ross, GC, CBE, CD (RMC 1924-1928). Winner of George Cross [equivalent to the Victoria Cross] for gallantry in rescuing aircrew from a crashed bomber. Ross is only one of nine Canadians to be awarded the GC.

Other notable RCAF ex-cadets – (does not include those currently serving in the RCAF):

Before and After the Ivey MBA with Lu Li

“I wanted to continue to serve Canada, but through business,”

Romeo Dallaire: Tory Complaints Over Veterans Costs ‘Pissing Me Off’

“And I say: Oh, yeah?” said Dallaire, describing how he walks them through the dollar cost of equipping and deploying the military on missions like the recently concluded 12-year mission in Afghanistan.

“And then I say, ‘Now that they’re home — and the ones that are injured — they cost too much?’ This has been sniffing its way around the Conservative hallways and it’s pissing me off.”