From Toronto to a PoW camp — and back again 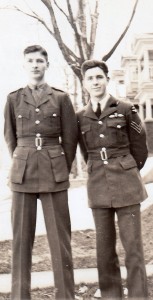 “That was my plane,’’ he says, his fingers running over the cover painting of the Avro Lancaster flying, as night bombers always did, in the dark over Germany.

The Lanc, as it was known, entered active service just months before Carswell, then a 19-year-old pilot from Toronto’s Beach neighbourhood, was shot down near Berlin.

It was his fourth wartime mission. It would be his last.

The Lanc, like so many of the young men who flew it, had a dismal casualty rate…

Son 11623 John explains that he took the book to a design firm to prepare it for publication, “It turned out a literary agent named Nick Harris loved it and then it was picked up by Wiley (the publishing company). And that’s the story.”

Footnote:  photo of Andy Carswell with his brother 2743 Jim, Class of 1940 just before Andy shipped out to England.

2743 Jim Carsell was in the War Class of 1940 which was abbreviated and the last before they shut down the college in 1942. Jim went on after the war to work in the U.S. space program and worked on everything from Nike and Mercury up to the Space Shuttle so he probably was the first RMC “Space Scientist”.

Another article & CTV Toronto: Naomi Parness on the new book Video – Toronto’s Andrew Carswell, 88, recalls the time he was forced to jump out of a plane over Germany in his new Second World War book.

MORE DETAILS ON THE BOOK – Over the Wire: A Canadian Pilot’s Memoir of War and Survival as a POW

New preacher at the pulpit for Sydenham church

Milne was a sea cadet in Ottawa and London. After joining the Canadian Forces in 1980, he graduated from the Royal Military College in 1984.

“You’re getting something right now that not a lot of people in Canada get and that is an understanding of how to be a leader, of how to solve problems, of how to stand in front of people and say, ‘Here’s what we’re going to do,’ ”

“Op Caribbe is all about preventing illicit narcotics from entering North America from both Central and South America, and we’re working with our allies in a multi-agency and an international type setting to achieve that goal,”

11190 Dick Isabelle, a former commander of Canadian Forces Base Gagetown