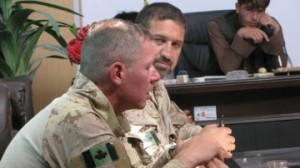 Canadian Brig.-Gen. Jonathan Vance, the head of Task Force Kandahar, speaks during an emergency shura in the Dand district of Afghanistan on Monday Sept. 28, 2009, following an IED blast that injured a Canadian soldier. Vance demanded the immediate meeting with village elders and told them he was ‘disgusted’ of the injury and that no one in the village had reported the explosive device being planted. THE CANADIAN PRESS/Bill Graveland