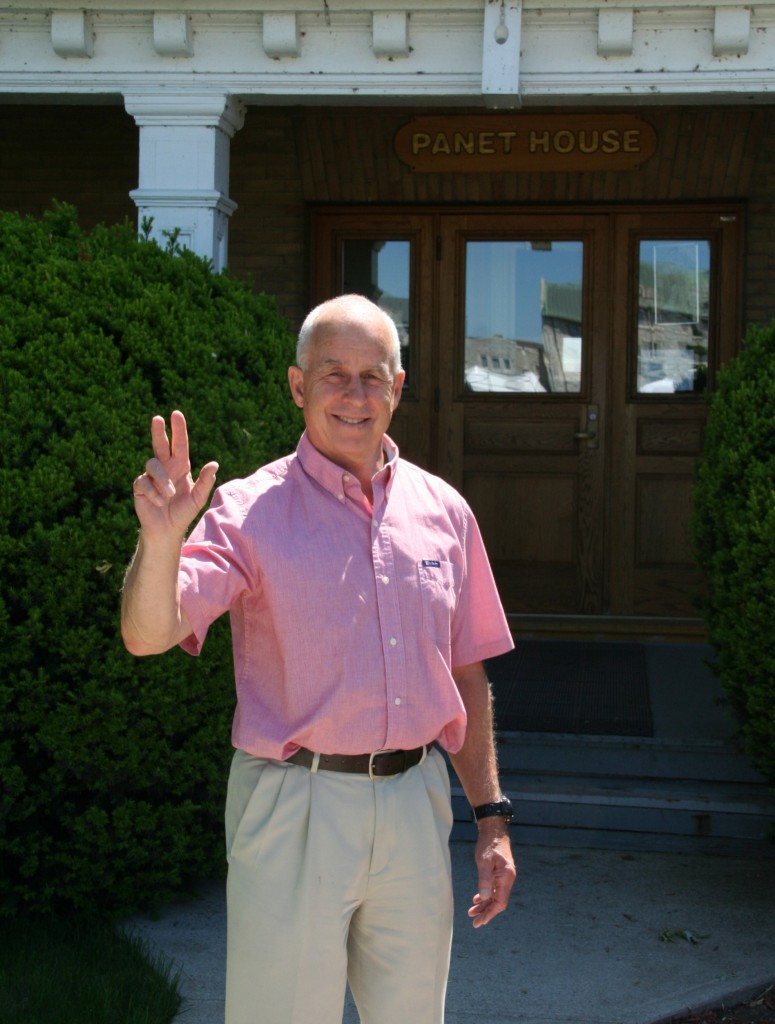 Executive Director bids farewell after a decade of service

After nearly ten years as the Executive Director of the Royal Military College Club of Canada, Peter Dawe will be moving on. His dedication to the Club has made Dawe an invaluable team member, and his contributions will not soon be forgotten.

In the last ten years, Dawe has worked hard to improve the services provided, and he is most proud of getting the Veritas magazine off the ground.

“We’re a not-for-profit organization, so it’s pretty hard to find dollars to pay the bills. I’m the Publisher and the Editor-in-Chief. We used to have someone on staff, but we were losing money, so I do Veritas and my regular job.”

Veritas is published three times per year, and Dawe tries to address issues that matter to the readership. In the last few years, he has been focussed on Afghanistan.

“We started to gear up and really take the fight to the Taliban in 2006, so we’re trying to keep our eye on that ball. That’s important to all of us who have worn a uniform, whether you’re a civilian now or not. We’re all bound by our common experience.”

The business of tracking stories is one of Dawe’s favourite parts about Veritas.

“It means that I get to stay in touch with a lot of people. I’ve made some good friends that way.”

One good example will be on the cover of the next magazine; Jameel Janjua is a fighter pilot, and he graduated from RMC in 2000, along with one of Dawe’s sons, James. 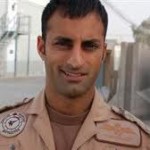 “Jameel is on exchange with the Brits, and he’s flying the Tornado. He made the last cut for the astronaut program as well. When Jameel’s squadron went into Afghanistan, we stayed in touch, and I suggested he write a piece about being with the Brits, supporting Canadian and NATO troops in Afghanistan. Before he could get settled back in Scotland, he got a Warning Order that he was going off to Italy to fly missions into Libya,” he said. “So between deploying to Italy and starting to fly the missions right away, he got this beautiful piece in, with photos and everything. That’s just an example of the kind of contacts you get, and the great folks you bump up against. That’s the part that I’m going to miss the most, is the folks. It’s always the folks.”

While some of the subjects covered in Veritas have been controversial, the vast majority of readers appreciate where Dawe is taking the magazine. “I deliberately stay away from having Generals write well-thought out, ponderous prose. We have other venues for that, like the Canadian Military Journal. What I’m trying to do is capture the visceral thoughts of young officers. We’ve been very good at that. I recall vividly one of the first rotations; 1 RCR was there, and I ran into Lieutenant Jeremy Hiltz, in the gym. We were talking, and he said that he had graduated with Matt, and Matt’s platoon took over Jeremy’s platoon. I’m always looking for stories, so I asked him to write a piece about his experiences while he was over there. He said he would take some time, but that he would get to it. When I got his article, it was 4000 words, and he was bleeding from every orifice. He was hurt. It was his platoon that got strafed, and he got 30 casualties, I think. Just a few days after that, I was talking to Jeremy’s Commanding Officer, Colonel Omer Lavoie, and it was exactly the same thing; he had written 4000 words, and he’d lost his Regimental Sergeant Major, Bobby Girard. And he was bleeding from every orifice. My editor said that the articles were way too long, but I told her not to change a word. We went with both. This would have been in the summer of 2006, and those two accounts are incredible. That was a crazy year. Nichola Goddard was on the cover of the Fall issue of 2006; that’s what we decided to do for any grad that was killed over there.”

Getting the magazine in three times per year was challenging, but Dawe acknowledges that every job has its challenges. “I’m the kind of person where the glass is usually half full. I tend to forget bad experiences, and remember the better ones, and that way you get ahead. It’s been a really good run for the last ten years; Bill Oliver, Mary Darlington and I have fed off one another, and it’s just been magic.”

Along with his team, Dawe focuses on connecting members and providing them with certain services.

“The most important services are communication tools, like Veritas, and also e-Veritas. With Bill Oliver as the Editor, he put that out 50 times last year; the volume he puts out is incredible. The mission of the club is to connect the members to one another and to their Alma Mater. In everything we do, we think about cadets and try to be relevant here on campus. There’s not a person that comes in here that’s not treated seriously, and looked after. Bill and I do a lot of things which are not in anybody’s job description, and Mary bends over backwards for people. She brings a certain spirit to the place.”

As a Combat Engineer with the Canadian Forces for 33 years, Dawe brought significant experiences to the position. One of his most memorable postings was as the Commanding Officer of 5e Régiment du génie de combat in Valcartier.

“The most important experiences are always of being a Commanding Officer, for me. In that post, there was a Newfoundlander who learned Latin in high school commanding in French. That was a challenge, but I had a three-month French course in 1970, and I commanded in Valcartier from 1984-86. My French was accented, of course, but as one Sapper told me one day when we were having a couple of pops in the troops stores, ‘You know what Sir? We know when you’re happy, and damn it, we know when you’re pissed off!!’ So that’s the aim, isn’t it, to communicate. I spent 28 months in command of a unit that was going through a hard time when I walked in, to one that was arguably one of the better ones in the Forces when I left,” he said proudly. “We cleaned up at the big Engineer competitions, and we stood out physically; we were always physically fit. We were always the top guys for blood donations, United Way – it didn’t matter what it was. Proportionately, we were always the best. In the Winter Games, we used to take it to the big guys. It was a great Command.”

Dawe made a significant impact as a Directing Staff member at Fort Frontenac as well. He spent six to eight weeks at a time with young officers on the cusp of committing to a career.

“They were about 30 years old, captains with some time in, and who were considering staying for life, or not. It was a particularly difficult time when I was there. I was there from 1991-94, through the Somalia Crisis. There were a few mornings, after reading some really bad stuff in the paper the night before, where I’d get through the course material in no time, and then we’d talk about what was on the news. I had guys who had served in Somalia, who needed to talk it out a bit. My job was to develop these guys so that they would not only do well on the course, but be good officers as well. That was an important job. There I was a lieutenant colonel and a mentor, and knowledge is one thing, but experience is a whole lot more, about how to deal with folks.”

Dawe is a natural at building a team, and his experiences have taught him that one of the most important aspects of team-building is leading from the front. He would never ask someone to do something that he could not or would not do himself.

“That goes a long way, especially in the Combat Arms. When I was a 40-year-old CO, I was in the top ten of everything in my unit; whether it was running or shooting – it didn’t matter. And I take a lot of pride in that. I have to tell you, the 18-year-olds notice it when you beat them in a ten kilometer run, or shoot their lights out on the range. The Army is physical; you might get away with it in a staff job, and be able to fly around, but in the Army, you’ve got to be able to do it from the front, or you don’t do it at all. That’s always stood me in good stead,” he explained. “And as a result, Bill keeps himself fit, and I keep myself fit. We try to be good role models for the cadets. We’re not going to run Harriers with them, but by the same token, we’re not slobs. We take a lot of pride in that, without even thinking about it. It’s just the way we’re built.”

Working as the Executive Director is not the first time Dawe worked at RMC. From 1976 – 80, he taught Civil Engineering, and his children grew up on the grounds here.

“I have noticed a change in the cadets in the last ten years, since Canada has been involved in Afghanistan,” Dawe said. “I would have to say that there’s a certain urgency now. Not 100 percent, mind you, but there are cadets who are here at the college for the right reasons. They tend to gravitate towards the Combat Arms, and when you’re reminded of Nichola Goddard and Matt Dawe, you know there’s no fooling around. It’s very serious. Every young person thinks he’s invincible, and it’s got to be that way. You can’t be looking over your shoulders if you’re going to war. While they’re invincible, and they are cocky, they still have the awareness that things can happen. It brings a degree of seriousness to the College. At the Combat Training Centre in Gagetown, all the instructors are better because of their experiences in Afghanistan. Now, suddenly, it’s real. The Engineers actually cleared routes, blew up live IEDs, and conducted missions under fire. Everything is so much more real. It’s the same with the Infantry and the Armoured Corps, in terms of their cooperation. Everything is better, and there’s mutual respect between the Arms now, and for Combat Service Support, for that matter. Everybody’s got a role, and in peace time, you can kind of slip around, but when you’re in the battle group in Panjwaii, you’d better all be on the same page. I think things have changed, and they have changed for the better.”

Upon leaving his current position, Dawe’s biggest fear is that he’ll become bored, but he will remain engaged in a number of different activities.

“I presently serve on several boards, and I’ll be the President of the Kingston Symphony Association in the fall, the President of the Buck Lake Association where I live, and I’m part of the Boys and Girls Club in Kingston. I’m also an Area Director for the Canadian Forces Liaison Council, which tries to get jobs for Reservists. There have been two or three other offers since I’ve announced that I’m leaving; my Army background is sure to bring a lot to these civilian organizations. I’m looking forward to having a more flexible schedule. This job was tough. It was hard to take much of a vacation, because there was always another magazine to put out, and you had to get things done. It was an intense ten years.”