Experiences in the Reserves have nicely prepared this Squad. Com. for the challenges at RMC 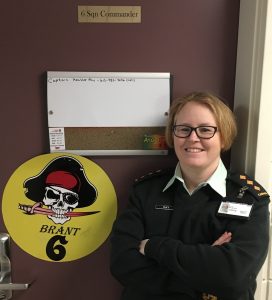 Leadership is a key component at RMC and the best source of leadership comes from the Squadron Commander (Squad Com). Squad Coms are officers taken from all over the Canadian Armed Forces with plenty of experience. Such is the case with Captain (Capt.) Heather Pay.

Born in Sault Ste. Marie, ON, Heather Pay began her career in the Canadian Armed Forces in a reserve regiment. She was accepted into the 2nd Battalion the Irish Regiment of Canada in Sudbury, ON where she attended Laurentian University.

The 2nd Battalion Irish Regiment is an infantry regiment, and was full of learning experiences, and that experience would be latter passed onto the RMC cadets.

She later transferred to the 1st Battalion, Royal New Brunswick Regiment, where she was employed as Platoon Commander, Adjutant and Company second in Command. During her time in the reserves she was deployed to Bosnia and Hercegovina with 1 PPCLI and Haiti with 2 RCR. She participated as a planner in countless national and international exercises which provided valuable lessons.

While at RMC, she has been able to connect with the cadets offering valuable information on being an officer and mentoring the cadets to become the future leaders of the Canadian Armed Forces. Overall, it is a learning experience for both sides while at RMC since the cadets learn from their respective Squad Coms, and the Squad Coms never have a dull moment around the cadets.

In conclusion, Squadron Commanders, such as Captain Heather Pay are examples of the knowledge that all of the officers at the Royal Military College have to offer the cadets, so that they are prepared for the tasks that await them in there respective occupations.

Reading Week: What is all the hype about?