The following is taken The Marker in April 1961.

At 0600 on Saturday the 25th of March, 62 alarm clocks went off at RMC and 62 bleary-eyed Glee Club members started to ready themselves for a trip to Toronto to sing on the CBC network on “Timmy’s Easter Parade of Stars”. After an early breakfast, the cadets boarded two army buses which were to take them to Toronto.

The destination was finally reached at 1200. After much searching, the CBC rehearsal studios were found, and the singers were let loose on Toronto to forage for their lunch. Fanning out from the Sumach Street Studios, the cadets invaded the city in search of a place to eat, and in some cases, from which to make strategic telephone calls.

By 1345, all were back in the studios, and they met the producer of the show, Mr. Stan Harris, who introduced his staff, and then got down to work. First, the Glee Club sang their proposed numbers in their entirety. One of these numbers did not meet with Mr. Harris’ approval, so a glee which had not been rehearsed for almost a month was substituted. Then, the producer committed a grave faux pas; he asked whether the cadets could march. On being reassured that the cadets could indeed march, an entry routine was worked out. This was then practiced and perfected. By 1630, Mr. Harris was happy with the performance put on by the club, and he gave the cadets their freedom until 2100.

This freedom was utilized in many different ways, and as a consequence, there were some spectators at the rehearsal who were giving the cadets moral support as they tried to appear as if they were seasoned performers. At this rehearsal, the Glee Club recorded the numbers that it was to sing on the show the next day. These recordings were to be played on the show while the cadets mouthed the words. This technique increases the quality of the sound that emerges from a television set, and it is very difficult to tell that the song is actually being mouthed. At the same rehearsal, the well known star Juliette and the Gino Silvi Singers also recorded a few songs. At 2300, the star of the show, Andy Williams, appeared, and the finale was practiced. By 2330, the rehearsal was over, and the RMC Glee Club eagerly melted into the dark of the Toronto night.

The next day, cadets straggled into Maple Leaf Gardens one by one until all were assembled at 1215. Complete chaos was reigning in the darkened Gardens, and the cadets sat down and watched how a show was put on in a rush. For many of the performers, this was their one and only rehearsal. For instance, Imogene Coca had finished her night club act in Washington, D.C. at 0100 that morning, and had immediately left for Toronto. The producer, dressed of course in earphones and a microphone, was easily the busiest and the most demanded man in the Gardens. He told all the performers what they would do, how they would do it, and where to do it. As well as this, he simultaneously gave directions to the cameraman and to the lighting technicians while doing this he also found time to “dig” some of the songs that especially appealed to him.

As the time for the opening of the doors came closer and closer, everything grew more and more hectic, until just when the doors opened, the Glee Club started its final run through of its entrance. The audience could not have been too impressed with the motley group of cadets dressed in shirtsleeves, but then this was only the rehearsal.

Suddenly, all the chaos subsided, and the 13,000 people in the audience filled up the auditorium without seeing the frantic preparations that had gone on not a quarter of an hour ago. The cadets seized this opportunity to fill up the players’ benches in order to watch the first half of the show, which was not going to be televised. This show was modelled on the minstrel hall days, and features an acrobat, a plate-spinning act, a magician, a two singers. Immediately after this part of the show, the cadets assembled in their dressing room where they put on their scarlets, or, to paraphrase a chorus girl, those gorgeous red uniforms. After seeing the televised portion of the show start, the Glee Clubbers assembled in the hallway outside the dressing room, and there were given their last minute briefing. One of the numbers, “Men of Harloch”, was completely cut, but the rest of the show was as practiced, except that the special formation for the finale was to be ditched.

By now, the singers were getting a little apprehensive, and as the acts went by, the cadets assembled in their respective areas from which they would march on to the stage to the tune of “Precision”. Finally, the Ivan Romanoff group ended their performance, and the Royal Military College Glee Club was next on the programme. While the two revolving stages were still being  pushed into position, the first bars of “Precision” could be heard, and the first line of cadets marched on. Since it was necessary to march on the revolving stages to get into position, the first few cadets found that they were marching straight at the camera, and yet, with the stage still being turned, they were standing still! When the first row was in position, the next two rows marched on from the wings, and the front row with agility sidestepped a camera which was right in their way, and so the Glee Club was formed up on the stage, marking time and mouthing the chords to “Precision” for all it was worth.

When that number was finished, the Glee Club then started to mouth its second song, “Amo, amas, I love a lass.” Unfortunately, in this number, the tape was slowed up a little, and thus the whole Glee Club was mouthing words which were not there. However being old troupers, this did not dismay the Glee Clubbers in the least, even though one cadet’s red hair was distinctly seen turning white. Then came the finale followed by the opportunity to escape the hot glare of the lights.

Everyone headed straight for the dressing room, where scarlets were taken off, and more comfortable dress was put on. The cadets streamed out into Toronto to say their last goodbyes. On the way out, some even signed autographs, thus immortalizing themselves and the Glee Club.

The buses started back for Kingston at 2000, and after a relatively quiet trip, the singers geared themselves down down to get back into the routine of the college after a weekend of being in show business. The next day, as congratulations came in, the Glee Club unanimously voted that this experience was well worth the time spent on it, and that more ventures like this should be undertaken.

“Timmy’s Easter Parade of the Stars” has been criticized because it is thought that it costs money to put it on, and that money used for Easter Seals is used to pay for this show. This is not true, as was pointed out by Mr. Harris. The performers gave of their time; sets, accommodation, television facilities, travel arrangements, in short, everything was donated, and the show, despite its high priced talent, costs absolutely nothing. 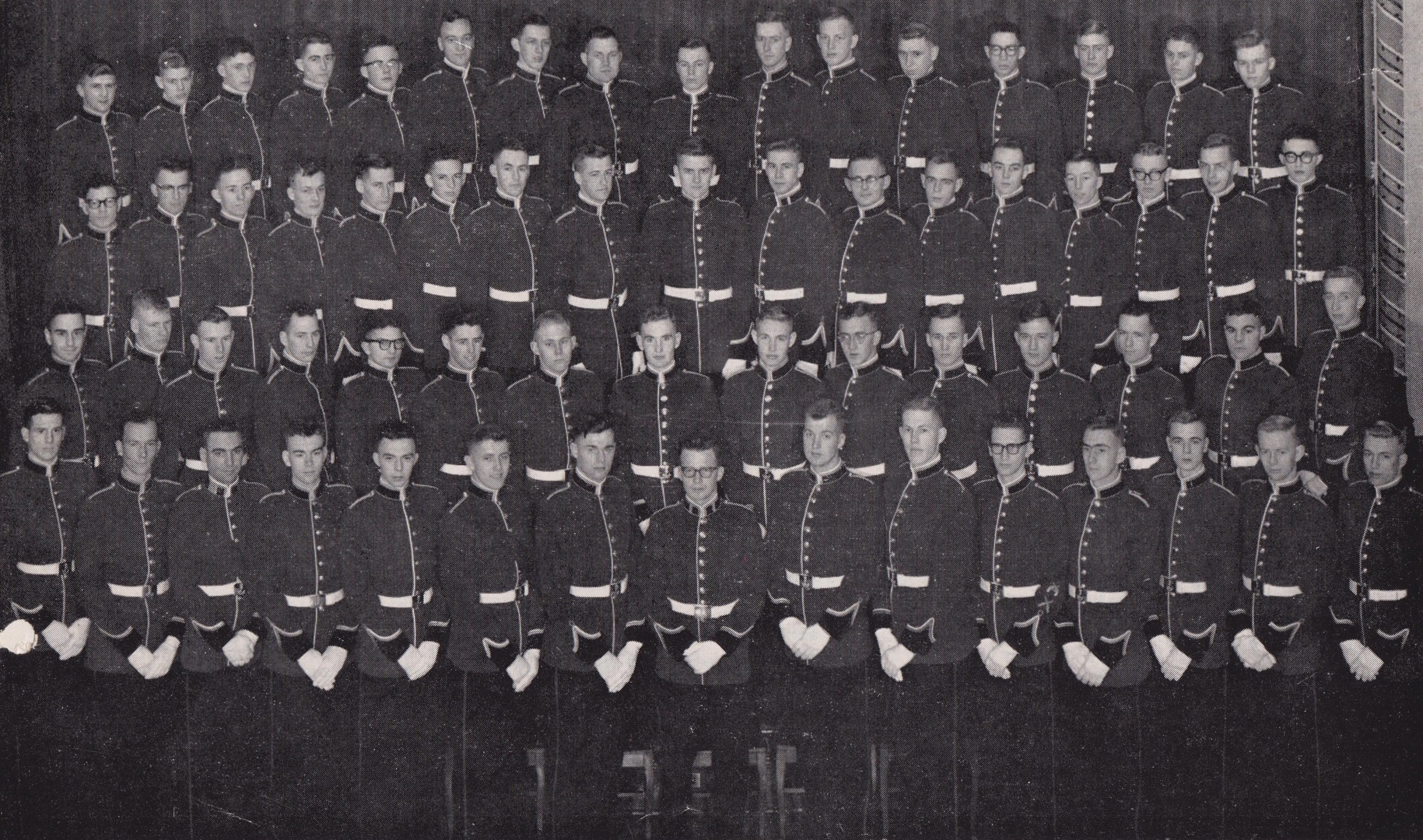 Names bracketed DID NOT go to Toronto.