(Readers are encouraged to follow the “Source & More” indicators)

My room has a small bed, a table with a small book case, and a
wardrobe. I am in the old dormitory and only have to go down stairs &
out a short walk to swim while those in the new dorm have to run
across the square. We recruits are only here for the benefit of the
seniors The meals up here are great. No desserts but one eats so
much before that one has no room.

The first week up here was awful! We were slammed around and made
do menial duties and all the rest of it. They lost their heads
completely and went too far. One fellow, wrote home to his father,
told him of the things which he was made do and the result was that
his father came up to the college and withdrew him from the college
after reporting the matter to the commandant. The commandant
immediately held a court of inquiry… The whole affair came out then
and two seniors who were non-coms were reduced in rank… He then
had all of us up and told us that we were not to do any
more fagging and ordered us to report any hazing that went on. In
the regulations it says that this is not allowed but it has always
been more or less the custom. The staff have been trying for the last
few years to cut it out.. We are not kept on the jump so much now and
are not woken up at all hours of the night to amuse the seniors. Last
week on account of us not getting enough sleep about ten fellows
fainted and hardly a drill passed without someone keeling over. I
myself was all right and kept up all right but the others had a
rotten time.

We are never disturbed at night now or made amuse the seniors and
so we are all right. They treat us fairly decently now and are all
standing by the commandants orders…They only lost their heads…
they were only recruits themselves …not used to giving orders.”


We’ve been out superintending the recruits working on the
obstacles. We sure are going to give them some race. The sports are
tomorrow and we have a whole holiday but at present it looks very
much like rain which will spoil everything.

The Sam Brown is coming along O.K. I use that Kiwi paste of Uncle
Bobs and the Packards liquid dope. The more its shined the better
it gets and believe me its getting some shining.

I believe they send drafts of officers over about every 2 months.
Please try to get me appointed to one of these batteries [73rd 74th
or 75th]… Say Im 19 and have passed an artillery course at Petawawa.

I suppose you’ve guessed it by now but its quite safe to tell you
that my official age is now 20. We all took a chance and shoved an
extra year onto our ages thereby saving the government and ourselves
much time, trouble and expense. However, as you all knew Id do it if
I had a chance I guess you wont be much surprised.

The last two days have been great and everything is drying up.
However, its still mighty cold at night and the water in the morning
is colder than R.M.C. was.

“We can’t mention an officers name on the phone now for some fool
reason so we have names for all … I get Canada of course.” 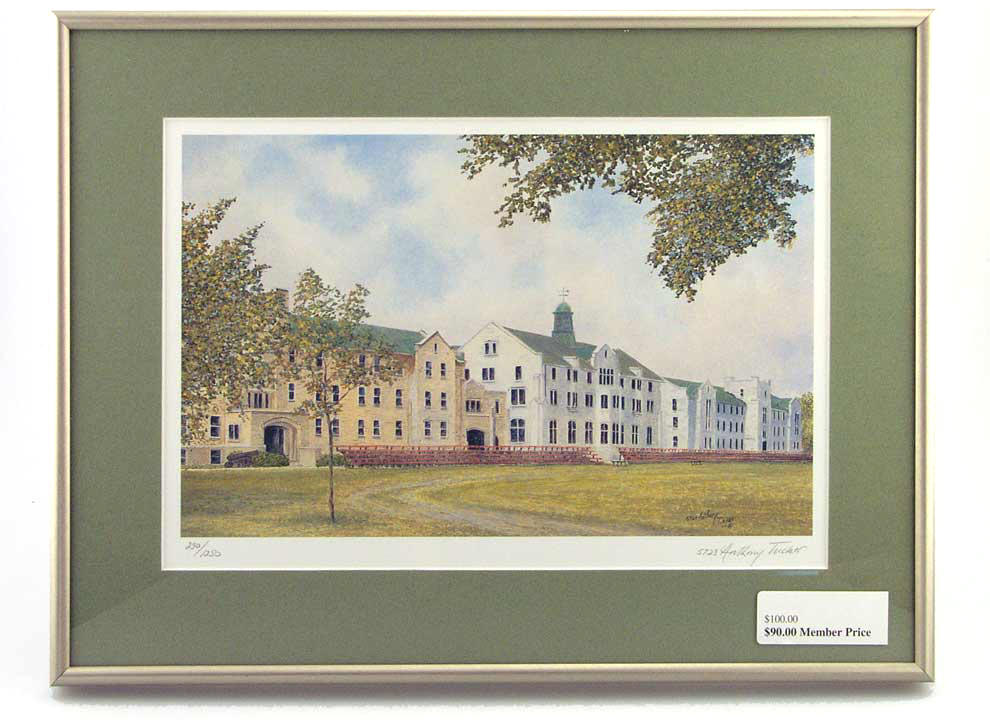 The print by 5723 Anthony Tucker (CMR RMC ’63), which is available at the RMC
gift shop, shows Fort Haldimand, Yeo Hall and Fort Lasalle.

1132 OCdt Howard Beverley (Bev) Thorburn (RMC 1915-16) writes that he
is in the old dormitory and only has to go down stairs and out a short walk to swim while those in the ‘new dorm’ have to run across the square. In 1915, when he wrote, which was the ‘new’ dormitory at RMC?