The following article is reprinted with permission from the RMC Museum.

On 15 October 1952 a small, 2 man submarine slid into Navy Bay, the historic water between the Royal
Military College of Canada and Fort Henry in Kingston, Ontario. There were a number of remarkable
features concerning this launching, not the least of which was that the designer was an Army officer who
oversaw its construction in an army establishment. As far as is known this was the first submarine designed
and then built in Canada. Submarines had been built at Vickers in Montreal during WW1 but they were of
US design. 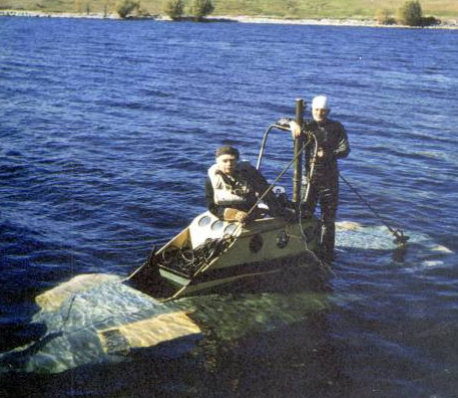 About the Point Frederick naval history

The Royal Military College was established on Point Frederick in 1876, but from 1789 to 1853 it was Naval
Dockyard, the only fresh water dockyard in the British Empire. Kingston was in those years a vital military
base as it was critical to the maintenance of control of Lake Ontario, and thus the defence of Upper Canada.
During the War of 1812 Kingston was the major fortress on the Great Lakes, and its dockyard built the
British Lakes fleet. HMS St. Lawrence was the largest warship built in Kingston for the defence of the
Lakes, and with its 102 guns it was larger than HMS Victory! Its construction was an amazing accomplishment given that all of the skilled manpower, rigging, ironmongery, guns and ammunition had to be imported from Britain via Montreal and ferried in barges up the St Lawrence to this wilderness dockyard.

After the War of 1812 naval activity slowly died out and the Dockyard was closed in 1853. There was no
further shipbuilding activity at Point Frederick until 30 October, 1951 when LCol Peter King, Head of the
Mechanical Engineering department at RMC, submitted his proposal for an Undersea Exploration Craft to
the Defence Research Board.

The germ of the idea for a submarine grew from discussions at RMC about locating sunken ships in the
waters around Kingston. King saw a need for improving methods for locating objects on the bottom of
relatively shallow water. In his words

“The use of divers in various types of diving suits was considered and it appeared that the need for
better control of manoeuvring and a reduced expenditure of manual energy to lessen fatigue was
required. It appeared that a diver could be suspended from a surface craft and direct his motion over
the bottom by telephone, however, this added disadvantages in working around obstructions and left
chances for misunderstanding. It appeared feasible to allow the diver to direct his motion by manual
control of a propulsion unit. Also, it appeared advisable to have no connection with the surface of a
mechanical nature to avoid endangering the safety of the diver. It seems that a device with a two man
crew in the nature of a midget submarine or mobile diving bell, if equipped with suitable provisions for
good vision, and having proper endurance would permit reasonably rapid search of the bottom
without tiring the operators unduly.

LCol King forwarded his proposal to the Defence Research Board on 30 October 1951. As one might
expect when dealing with a headquarters almost one quarter of the main body is devoted to the expected
cost! King’s proposed design embodied a number of clever ideas, and somewhat at variance with the norm. 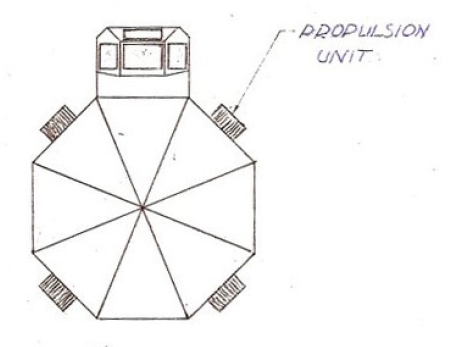 What he envisioned was a two man submersible powered by compressed air, which would operate air
motors driving special water jet propulsion units. In order to keep the weight low and the design simple,
King proposed a craft where the air exhausted by the engines would be fed into the crew compartment and
vented out its bottom. This would result in an internal pressure slightly above hydrostatic pressure, and
ensure a continuous supply of fresh air to the crew. It would also result in a hull which could be of
relatively light and simple construction since the pressure inside the submarine would be the same as the
outside hydrostatic pressure, independent of depth.
The submersible was to have the following operating characteristics:

With a crew of 2, have the ability to operate close to the bottom, to 10 fathoms (60 feet), with good
visibility.
Maximum speed of 5 knots, and a duration of 5 hours at 3 knots
Manoeuverability such that it could turn while stationary, and move vertically or transversely without
longitudinal motion.
A simple means of escape through the bottom of the crew compartment.
The controls to be easily operated and so arranged that no appreciable expenditure of manual energy is
required for more than a few seconds at a time and then only on a scale comparable with operating a motor
truck.

It appears that the proposal was accepted by DRB, but no response from them can be found.

Similarly, no correspondence between RMC and the Diving Unit in Halifax has been found. However, the
divers were undoubtedly involved in the design criteria as their strong support for such a project would have
been required. As well, two officers of the Fleet Diving Unit (identified as the Explosive Disposal Unit in
the report) were directly involved in the trials of the submersible at RMC. ( brief biographies of the two
divers are included below )

To save money and time, King intended using standard torpedo air flasks as the source of 2000 psi air, and
torpedo engines as the power source of propulsion. Unfortunately his tests of the torpedo engines showed
that they would not produce sufficient power, and thus his first unexpected task was to design his own
engines.

The project began in October of 1952, with all construction being carried out by the RMC Machine Shop
staff. The only exception was the periscope, which was undertaken as a design and build project by the
instrument section of the Royal Canadian Electrical and Mechanical Engineers’ School in what is now Base
Kingston.

The hull consisted of a “cab” (drawing side view here) constructed of 3/8 inch mild steel, and a hull frame
of angle iron covered with 1/16 inch steel plate. A number of viewing ports were fitted around the top of
the cab. There were two hatches, both of which were hinged in the middle similar to a telephone booth door
to permit ease of entry and exit. The lower hatch would be used by a diver to exit and enter, and for
emergency escape, and the upper for normal entry. 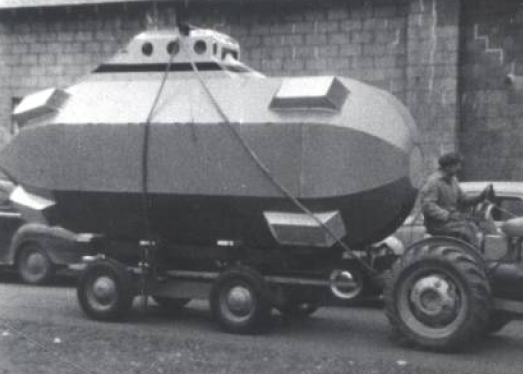 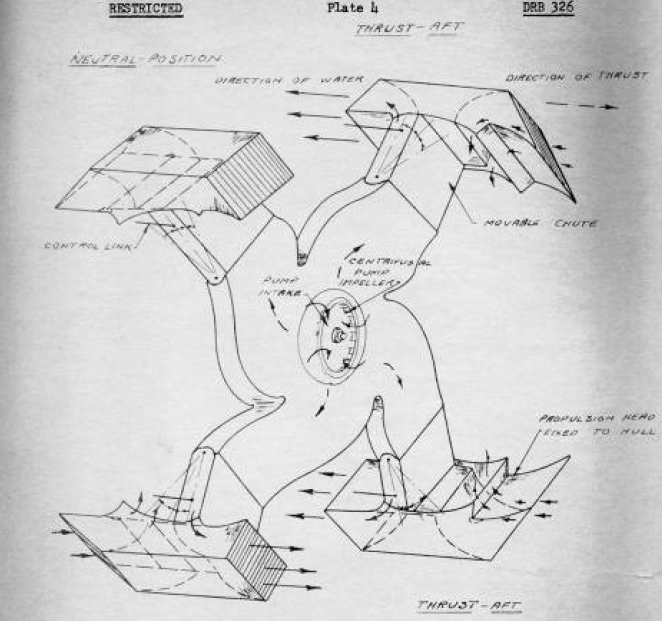 When the propulsion unit was operating water was forced into the chutes. The flow in each chute could be
controlled by the operator in the cab by shifting the position of the movable part of the chute forward, aft or
to the neutral position. As the water exited the chute propulsion head it produced a force of reaction in the
opposite direction. Each propulsion head ( Hydro-Jet ) was independent so the combination of thrusts could
produce accurately controlled movement.

The resulting submersible was 20 feet long with a 6 foot beam, and weighed 7200 pounds. The total cost of
construction, including RMC salaries, was just over $20,000.

The first trial was held on 15 October 1952, less than seven months after the start of construction, with LCol
King and LCdr JC Ruse of the Explosive Disposal Unit from Halifax on board. During the first dive, which
was done in 20 feet of water, it was learned that buoyancy control was not sufficiently sensitive, making
depth keeping difficult. As a result diving and trim tanks were installed over the following winter. 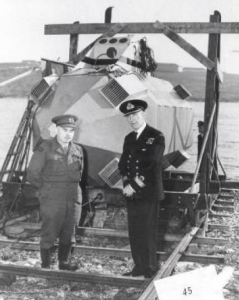 The second trial occurred on 4, 5 and 6 August 1953 with LCol King, and two officers from the EDU in Halifax – LCdr John Ruse and Lt Don Loney. Depth control was much improved from the first trial, LCol King being able to maintain depth variation within 5 feet while traveling at 1 mph close to the bottom. The divers practiced exits and
entrances from the crew compartment without any problems. On 6 August the craft was operated for 90 minutes, practicing diving, surfacing and resting on the bottom at 30 feet. “Fuel consumption” was roughly half of the HP air available in the HP air flasks.

Diving planes were fitted in September 1953 which gave improved depth control to only one foot of variation. The final trial proved that the craft could move two people at 2 feet per second over harbour bottoms with good control for up to three hours or more, depending upon the speed. The design could be deemed a success! The submarine became a popular attraction for visitors, including Field Marshall Montgomery and Canadian naval officer Commodore Horatio Nelson Lay.

The trials proved the design concept, and encouraged LCol King to propose an improved second model
incorporating design changes to improve performance. The major change was to be a new, streamlined hull
to replace the “lines of a brick” structure of angle iron and steel plate. The new hull would be made of
fiberglass to reduce both drag and the magnetic signature, which would increase speed and control, and
susceptibility to magnetic mines. The addition of a compass was also recommended. He envisaged a craft
of this type being tethered below a “mother ship” which could supply illumination of the bottom, and high
pressure compressed gas through a hose. Included would be a communications link between submarine and
surface craft. A sketch of the improved hull shape is shown in plate ??.
Since no further work was done it is assumed that DRB turned down the proposal for an “improved” model. 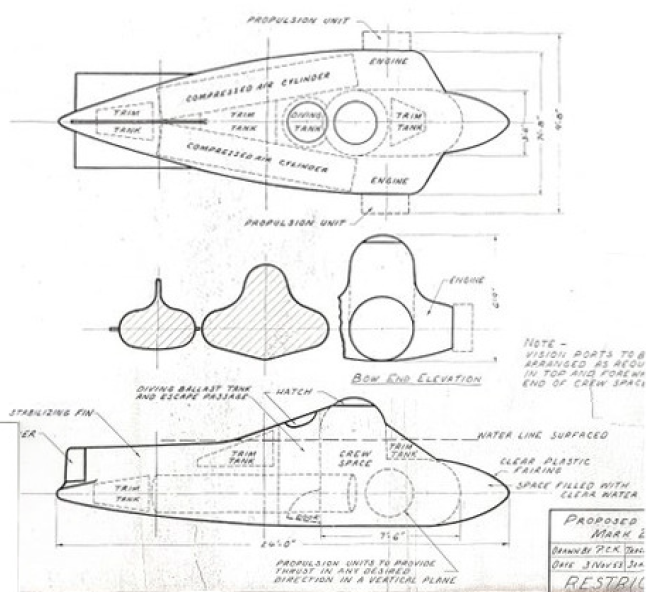 The first to arrive at RMC was Lieutenant Commander John Ruse, selected one has to presume because of
his wartime submarine experience. 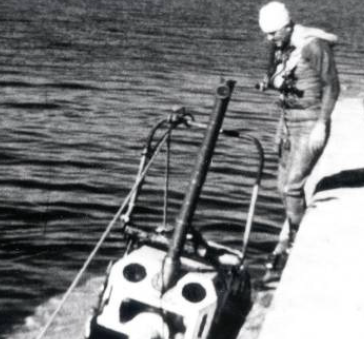 He was the Commanding Officer of the East Coast Diving unit at the time of the RMC submarine trials. After attending Royal Roads in 1940 he served in escorts in the North Atlantic, and then volunteered at age 23 for service in X-craft, the RN’s midget subs. It should be noted that the X craft embodied one of the key features of the King submarine – the ability of a diver to exit and reenter the boat while submerged.

A few months after requisite training, Ruse took over as CO of the operational boat X21. As the training soon intensified further, rumours grew that another raid on the German Battleship TIRPITZ in a Norwegian Fjord was
imminent, however the planned raid was cancelled, much to the disappointment of all the crews. Ruse then took command of XE8, which was then slated to go to the Far East. However, with the War drawing to a close, the whole operation was cancelled.

John was demobilized from the Navy in March 1946 upon their return to Canada, but rejoined the RCN in 1950 at HMCS STADACONA as Lt. Commander for the Korean War, taking up the position as Commanding Officer of the East Coast Diving Unit located at HMC DOCKYARD in Halifax.

The second diver to join the project was Lieutenant Don Loney. Many will recognise him as a well known
Canadian professional football player, having been on both the Toronto Argonaut and Ottawa Rough Riders
teams between 1946 and 1952. He had joined the RCNVR in 1943 and served on the East Coast during the
War. He answered the call for candidates for the first self-contained diving course in Halifax in 1950, and
served as a Diving Officer until he retired from the Navy in 1957. 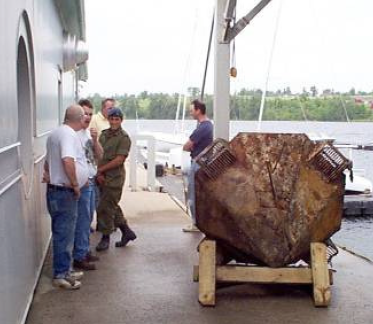 The submersible was broken up and the parts sunk in Navy Bay. What remains of LCol. King’s creation is an 8 minute-long black and white film showing launching and surface operations, more than 90 photos and some construction sketches. NDHQ apparently considered this a Top Secret project as it was not declassified until 1968!

We would appreciate any further information on this project that readers may have. Cadets of that period
are known to have helped with the construction. Of particular interest is correspondence related to the
involvement of the Diving Unit, and between RMC and DRB.