Familiar and friendly faces return to the peninsula.

Many of our readers, especially Ex Cadets may recognize some faces and names from days gone by at RMC.

For eleven last Fridays of the month, (they skip December) every year – a number of former college professors and other former senior staff members meet for lunch and to ‘catch up’ on the news.

They usually switch venues every month going from one restaurant to another in and around Kingston.

This past Friday they ended up at the Senior Staff Mess.

Included in the group this time around:

A great bunch of gentlemen that collectively contributed 459 years to the RMC. 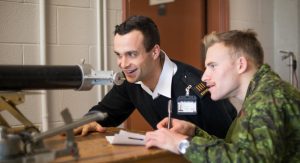 Aerospace propulsion is a core course for RMC’s Aeronautical Engineers, and available to the Mechanical Engineers.

In addition to the inevitable hours of lectures and piles of homework questions, the student teams do three labs, including this one on propeller performance.

While it is simple to run a propeller on a test bench and observe its behaviour, that is not the natural environment of today’s (wild or domesticated) propellers.

The RMC closed-circuit wind-tunnel provides the airflow necessary for the student teams to determine propeller efficiencies, speed, thrust and torque at a range of simulated flight speeds.  Like any testing, 100 hours of planning go into 1 hour of testing.

Dr. Asad Asghar, Adjunct Associate Professor and Research Associate in the Department of Mechanical and Aerospace Engineering has perfected this propeller test rig over the years.  He is never far from the students to advise and keep them smart & safe.

The testing is undertaken in the windtunnel which has multiple test sections to support this sort of undergraduate activity on tight time lines, and also a range of research efforts.  The test sections can be quickly switched in an out to maximize the availability of this precious resource.

It will be a busy year.

More photos on this project by OCdt Louis Saulnier – Here