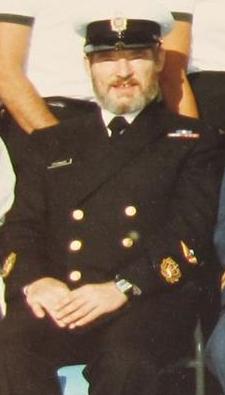 An hour due north of Kingston is where you’ll find the village of Sharbot Lake, a community of approximately 1,500 people located near the intersection of Highways 38 and 7. On a recent visit where I attended the opening ceremonies of the K & P trail, I had the pleasure of meeting a local character who will no doubt be easily recognizable to many cadets who attended RMC during the late -1980’s. This is none other than the imitable CPO2 (ret) Paddy O’Connor, who served as the senior Physical Education Recreation Instructor (PERI) with  the Athletic Department staff, and for the past 25 years has been enjoying retirement in the nearby community of Tichbourne.

Paddy’s military career began in 1958, when he enlisted in the Queen’s Own Rifles and began recruit training at Currie Barracks in Calgary. Following completion of basic training, he was posted to Germany to serve with the unit. His love of athletics was quickly recognized, and soon thereafter he was assigned to the sports platoon, following which he spent much of his career as an Army PT instructor. He has many fond memories of former colleagues such as the late Lieutenant General Charles Belzile, who served as the Regimental Adjutant during that period, and played alongside Paddy on the hockey team.

It is worth noting that during his tenure at RMC from 1987 to 1990, Paddy served briefly under the late 3543 BGen (ret) Walter Niemy; and for most of his tour under 4459 Commodore (ret) Ed Murray. While at the College, he set high standards for his cadets, but also sought to lead by example, such as by running the obstacle course alongside the recruits at a time when Paddy himself was approaching his 50th birthday.  He also remembers other fellow NCMs who served on the staff during that era, notably the late CWO Denis Fournier, who served as RSM of the College from 1986 to 1990, and who Paddy describes as being “a soldier larger than life”. (As one of Fournier’s old recruits, I can attest to the accuracy of that statement !) 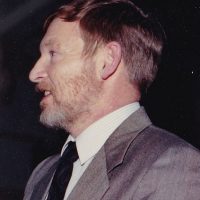 Through his years at RMC, Paddy got to know many of his cadets on a personal basis. He has fond memories of the College, and high praise for those who have passed through it. “When I was posted at the base in Kingston in the 1960’s, my colleagues and I often went down to RMC to watch events like the recruit boxing” he says. “It was pretty exciting to be able watch the action, and see the tenacity and fortitude of the cadets who were fighting. When I think of all the requirements a young person has to meet in order to be successful at RMC, there’s no doubt that cadets are a pretty special group of people. It is not at all surprising that so many of them do very well in their careers after completing their time at RMC.”

After starting out as an infantryman and rising through the ranks of the Canadian Army to become an MWO, Paddy voluntarily remustered to the RCN, retiring from service in 1992 as a CPO2. Since that time, he’s been enjoying life in Central Frontenac, a place that he clearly loves, and one where he has become a well-known local fixture. 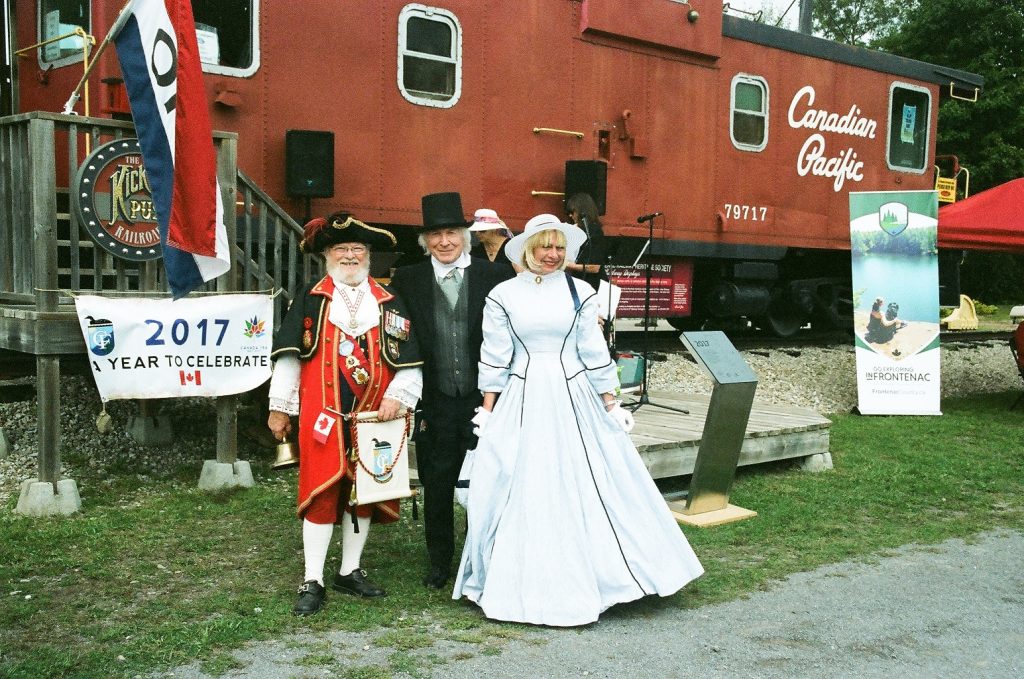 Paddy with Sir John A. MacDonald

But though he’s now long out of the military, that hasn’t stopped Paddy from continuing to make important contributions to his community and to his country. Indeed, after hanging up his RCN slops for the last time, Paddy has now donned a new uniform that reflects the importance of the role he has taken on in retirement. As Town Crier for Central Frontenac, he has a prominent and highly visible presence at a wide variety of events that take place in the community.

At the recent opening of the K&P Trail he was resplendent in his latest uniform, festooned with the various badges he wore over the course of his career, and the medals he earned as a result of his service. “I have become a bit of a walking billboard for the Canadian Forces” he says. “You’d be amazed at the number of questions I get from civilians and visiting Americans about the mementoes of my career that I now wear proudly on my Town Crier regalia.”

If I were to sum it all up, Paddy might be best described as a prime example of the greatest reward of military service: one of those memorable and lovable characters with a heart as big as the outdoors, and a rare ability to make the many hardships of soldiering actually seem like fun. Still going strong at the age of 78, he’s passionately committed to bettering the community around him, and is showing no signs of slowing down. Old friends who knew him at the College 30-odd years ago will no doubt be pleased to hear that he’s in good health and doing well. We thank him for his service to Canada and to RMC, and we wish him continued happiness in his golden years.

You can find out more about Paddy and his latest adventures here http://www.centralfrontenac.com/Testimonials.html#prettyPhoto/1

Ex-cadets and former staff members who would like to contact Paddy can reach him by e-mail at  [email protected].