It is rare indeed when a former staff member returns to RMC as a cadet.  This is exactly what has happened to a current member of Otter Squadron – the Squadron for non-commissioned personnel who are heading back to university to get a mid-career degree at Royal Military College.

The highly accomplished and energetic E3161 Victoria Edwards (RMC 2003) recently  interviewed M0993 Officer Cadet Colin Clansey, who is going into second year Economics at RMC and is looking forward to graduating in 2013. 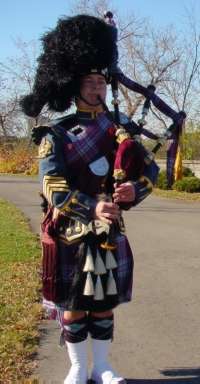 E-veritas: What were your primary duties prior to becoming a cadet at RMC?

OCdt Colin Clansey: Before I enrolled in the military, I joined the Simon Fraser University Grade 2 Pipe Band when I was 11 years old, and the SFU Grade 1 Pipe Band at 13. My initial trade upon joining the Canadian Forces was AVS (avionics system technician). I now have 13 years of service in the Forces. After three years as an AVS Tech, I remustered to MUSN (musician) in 2000, and became the Pipe Major of the Air Command Pipes & Drums in Ottawa 2000-2002. This was followed by a posting to the Royal Military College as an instructor with the RMC Pipes & Drums in Kingston 2002-4, and then to Petawawa as the Pipe Major of 2 Canadian Mechanized Brigade Group Headquarters and Signals Squadron Pipes & Drums 2004-9. My previous postings were thus HQ & Signals Squadron, Petawawa; Royal Military College, Kingston; Air Command, Ottawa; 19 Wing AMS, Comox; and Borden for AVS Tech training, and Kingston for POET (electronics training).

E-veritas: What do you consider the role of a Pipe Major to be?

OCdt Colin Clansey: I last served as a Pipe Major in the Canadian Forces with 2 Canadian Mechanized Brigade Group Pipe Band in Petawawa. In the civilian world, I assumed leadership of the Glengarry Pipe Band in 2001 in order to reconstitute a senior grade competing band in Maxville, Ontario. The band has since then been successful in numerous competitions, winning prizes in Canada and the US, as well as at the World Pipe Band Championships in 2004 and the placing in the top four at the North American Pipe Band Championships for the past 8 years.

My job as a CF Pipe Major was primarily to provide music at such functions as mess dinners, change of command parades, graduation parades and guards of honour. The Pipes and Drums provide a traditional and cultural link to CF history that many members find inspiring, especially at ceremonial engagements. As a professional musician, it was also my responsibility to ensure my personal standard of performance was maintained and improved. This meant participating in professional piping competitions around the world, including in the Silver Star, held in Oban, Scotland, at the Argyllshire Highland Gathering. This is an invitational competition, which annually attracts the world’s best professional pipers.

E-veritas: Are you with the RMC Pipes and Drums currently? Any tips?

OCdt Colin Clansey: No, I am not with RMC Pipes and Drums currently. I have left the musician trade and feel that the current RMC instructors and cadet band leaders need their space. The instructors tend to come up with their own lists of tunes in addition to the staple pipe tunes at RMC: `Alexander Mackenzie` and the `Stone Frigate.` Since RMC doesn`t have separate instructors for drum, pipes and highland dance, it is helpful to have experience in all three and to rely on the cadet leaders. I used to highland dance and recommend it to male and female cadets.

OCdt Colin Clansey: I placed second in the Silver Star Former Winners’ March, Strathspey & Reel competition, held in Oban, Scotland in 2005 – definitely the highlight of my individual piping career so far. I took two 2nds and a 3rd in the Silver Medal Piobaireachd competitions held at Oban and at Inverness. I won the North American Professional Championships in 1997. I am a two time British Columbia Pipers’ Association (BCPA) Knockout Champion. I placed 1st in the Professional MSR and Jig competitions at the BCPA Annual Gathering in Vancouver, BC. Most recently, after a hiatus while deployed to Afghanistan, I won the Freestyle two-to-four-minute medley, which took the place of the usual Jig competition at the Oshawa Highland Games in July 2010. 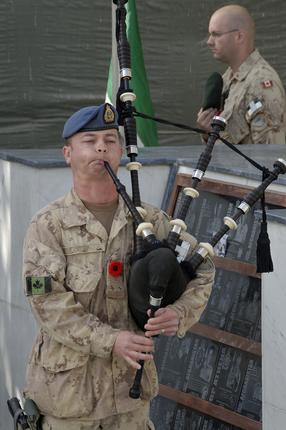 OCdt Colin Clansey: Yes. From April 2008 to March 2009, I was deployed with JTF-Afg HQ Roto 5.5 as the TAV Coord WO for Task Force Kandahar. I was at times the only piper in KAF (although there were numerous pipers out with the Battalion). It was, to the best of my knowledge, the first time a Canadian Pipe Major deployed to a war zone since World War II. On November 11, I performed the traditional Lament on the pipes at the Canadian Fallen Soldiers’ Memorial in the Canadian compound during the Remembrance Day Ceremony held at KAF. I had composed a piece specifically for Canadian soldiers in Afghanistan (“Task Force Kandahar”), and this was the first time I played it. From then until I redeployed it was the only piece played at Canadian ramp ceremonies (it is still occasionally played, depending on who is piping). [S150 LCol (ret`d) Peter and Reine Dawe and their daughter-in-law 22621 Tara Dawe were one of six families of fallen soldiers who came to Kandahar in 2008 as part of a Canadian military Remembrance Day tradition. Each family placed a wreath on the marble cenotaph which contains the names and photos of the [then] 97 fallen soldiers killed in action in Afghanistan. 22596 Captain Matthew Dawe (RMC 2004) and five other soldiers were killed on July 4, 2007, when their vehicle was struck an improvised explosive device powerful enough to kill him and five other soldiers. Since then, 151 Canadian soldiers and two civilians have been killed in Afghanistan.]

E-veritas: How do you balance the four pillars of academics, military, athletics, and bilingualism with extra curricular activities like the band?

OCdt Colin Clansey: It’s more a balancing act between academics, athletics, bilingualism, and family. My wife Christina and I have a baby daughter Tianna. At this stage in my career, I’m pretty comfortable with the military aspects of life. Going to university 17 years after graduation from high school, however, is quite challenging, and fitting in a good run now and again is important to retain sanity. But most important is being able to maintain a healthy family life. My family is here for 4 years – this is not a two or three month long career course, nor an exercise, nor a deployment. You have to make room after a work day to spend time with your family and kids, regardless of the competing priorities of work and school.

E-veritas: What are your greatest challenges at the Military College?

OCdt Colin Clansey: My greatest challenge at the Military College is recognizing that most of my fellow students were born as I was graduating from high school.

E-veritas: I understand that your job is a source of pride.

OCdt Colin Clansey: All of my jobs in the military have been a source of pride. Certainly, I was proud as a military Pipe Major in that playing the pipes brought emotion to every person who heard them—whether it be love or hate, the pipes evoke passion and memories. The greatest satisfaction in my deployment to Afghanistan was being able to honour the sacrifice of the fallen by piping them home. Although I was deployed to Afghanistan in a logistics trade that had nothing to do with music, I performed at over 50 ramp ceremonies for Canadian, American, British and Australian personnel. Now, as an Air Combat Systems Officer, I look forward to returning to the “hard” Air force environment (forgive the oxymoron).

E-veritas: To what extent did RMC differ from your other postings?

OCdt Colin Clansey: As a Pipe Major, it differed in that it was entirely an instructional and supervisory position. It was great to be with young students who sincerely wanted to make a difference in the world – they were not yet bitter, or twisted, or cynical about life. They inspired me as much as (I hope) I was able to inspire them in music and leadership. My efforts to motivate the students revolved around providing an exciting, fun atmosphere for teaching and performing music, while imparting knowledge of military music in the context of our cultural and historical heritage. Now, as a student, RMC is totally different – I am officially on the learning side of things.

E-veritas: Did the RMC band perform on television or produce any recordings at RMC?

OCdt Colin Clansey: Not while I was pipe major. Shortly after I left, MWO Doug Craft, the Drum Instructor and Band Sergeant Major at the time, oversaw a televised recording with Rick Mercer.

E-veritas: Do you follow the careers of any of the former RMC cadets?

OCdt Colin Clansey: It was nice to see many cadets that I met as a Pipe Major here, while I was deployed. Most of them still play pipes or drums or dance, although not as frequently – it is not easy once real-life training schedules and deployments and family priorities kick in.

E-veritas: What are you doing during summer training?

OCdt Colin Clansey: This summer, I am on French training at RMC in Kingston. Since I didn`t speak French, I was in a disadvantage when teaching pipes or cornemuse to Francophone musicians. The parts and bagpipes notation are not necessarily translated into French.